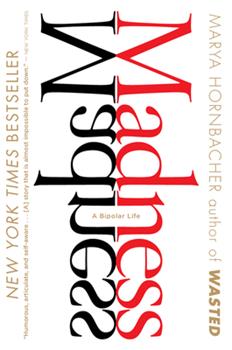 Pulitzer Prize-nominated author of Wasted, Marya Hornbacher's astonishing New York Times best-selling memoir from the belly of bipolar disorder. Marya Hornbacher tells the story that until recently she had no idea was hers to tell: that of her life with Type I ultra-rapid-cycle bipolar disorder, the most severe form of bipolar disease.In Madness, Hornbacher relates that bipolar can spawn eating disorders, substance abuse, promiscuity, and self-mutilation,...

Published by Lee , 1 year ago
Very good book and so helpful. It let me know what I feel and think is "normal" for someone that has bipolar. It let me know that the meds really do mess you up a little bit and its not all in my head. I recommend this book for anyone that is suffering from bipolar disorder. Itll let u know that you arent alone and that the struggle is actually REAL, its not in your head after all. I recommend this book to friends n family members that are dealing w a loved one that has bipolar disorder.

I know the life

Published by Thriftbooks.com User , 13 years ago
As somebody who does have rapid cycling bipolar I disorder I loved this book because I have lived it. I know all to well what she went thru and the hospitals (I have sweet talked deals with dr's not to put me in & have gone to therapy everyday) and the horrible side effects that some medications have on one. Every account in her book reminded me of something that had happened to me kudos to her for writing it.

From the Inside Looking Out

Published by Thriftbooks.com User , 14 years ago
Having recently entered into the confusing world of having a child diagnosed with bi-polar, trying to tease out a distinction between mental illness and drug and alcohol addiction, watching different psychiatrists prescribe different medications, along with the child being a hostile patient, i.e. doesn't want to talk about what's going on---this book is a brilliant insight into what's going on inside a rapid cycle bi-polar head. I recognized some actions of my son throughout this book and finally got a sense of what it must be like inside his brain. This book gave me a new appreciation for the pain he is trying to hide or run away from. And also gave me insight into how I can better be there for him in his mental illness while not enabling his addictive behavior. This illness is not fun and there seems to be a lot of differences in how to treat it, especially as the field of study on bi-polar appears to be expanding and new treatments are on the rise but not consistently throughout the psychiatric profession. Marya Hornbacher has done a great service for me by writing in such vivid prose her ongoing dilemma. Admittedly, my reading on bi-polar is not exhaustive, but this is the first book I've read that truly captured the tyranny of this illness. Ms. Hornbacher is a truly gifted writer. I do not envy her the ongoing struggle she faces, but she sure dug deep to write this. Throughout the the painful descriptions of behavior and feelings shines a courage that lifts my hopes for my own son.

An Insighful perspective of Bipolar I Disease

Published by Thriftbooks.com User , 14 years ago
[...] Madness: A Bipolar Life, written by Marya Hornbacher, is an extremely well written title that relates her struggle with Bipolar Disorder I - sometimes termed Manic Depression. She suffered from the disease since she was about four years old. In spite of her manic episodes, her manic elations, her depressions, her self mutilations, her hyper sexuality, her anxiety, her compulsive buying of unnecessary things, her myriad hospitalizations, and the several misdiagnosis reached by several of the doctors that treated her; she was able to achieve a tremendously outstanding work as a writer. Every time she was hospitalized, or went into one of her manic episodes or depressions, she was treated with different medications or given distinct doses of the same medications. The truth is that, as she states in her epilogue, the first medication designed specifically to treat Bipolar Disorder is still waiting, and in her particular case, she has been treated with Lamictal, Tegretol, Geodon, among others. However, she is still struggling with her disease, and probably will fight it during her whole lifetime. That is: Forever. Of course, she has periods of remission from her bipolar disorder and becomes quite functional. I consider this title an utterly important one especially for those suffering from the disease or who have a relative, a friend or an acquaintance that suffers from it. It gives the reader a more realistic perspective of what goes into the minds of the sufferers of Bipolar Disorder I, and the reasons why they sometimes refuse to take their medications or act in unbelievable manners. The book also pinpoints the important factor that the family, spouses, and friends become in understanding and helping the sick ones. Is I have mentioned before, Marya is a gifted and brilliant writer and I cannot wait to read her first title, Wasted, which deals with her ordeal with Anorexia and Bulimia. Definitely worth the read!

Published by Thriftbooks.com User , 14 years ago
Madness is one of the few personal accounts of bipolar disorder I've read that covers the escalating unfolding of the disorder from such an early age (4 years old) to the present. The book covers just about every aspect of the struggle with bipolar disorder - early failures to diagnose it, misdiagnosis, clueless and competent psychiatrists and therapists, stressors, triggers, the tendency to self-medicate, hospitalizations, hyper-sexuality, the terrible side effects of many of the medications used to treat depression and mania, bipolar and career, alcoholism, self-mutilation, relationship dynamics, lack of insight (not realizing when a manic episode is settling in), and the highly productive and invigorating hypomanias that often convince those with bipolar disorder that nothing's wrong. Her narrative functions almost like a textbook case study of bipolar disorder. The book has a solid chronological structure that leads the reader through the escalating and exhausting mood cycles Hornbacher experienced. She is a highly skilled writer who keeps the narrative progressing at a quick pace while revealing dazzling insights about the disorder, about people, and about life in general along the way. What I found particularly helpful about the book is Hornbacher's descriptions of how her mood episodes began so seemingly innocent enough. One day, life seems to be just fine and then over the course of several days, weeks, or months becomes wonderful - everything is clicking and Hornbacher's energy and joy seduces all those around her - and then, just as suddenly, her world crashes in on her. People who haven't experienced this, don't know what it's like. They wonder why people with bipolar disorder can't tell when their moods are cycling or why a loved one didn't step in sooner. I think Hornbacher's accounts can help people gain a better understanding. As co-author of Bipolar Disorder for Dummies and as someone who's "married to bipolar," I could relate to just about everything in Madness. Hornbacher does an incredible job of taking the reader on the roller coaster ride that is bipolar disorder, revealing the wreckage that bipolar leaves in its wake, and filling those who battle it in their own lives with an appreciation of the positive aspects of the disorder and hope for a better future.

Another brilliantly-written memoir by Marya Hornbacher

Published by Thriftbooks.com User , 14 years ago
'Madness' lives up to Ms. Hornbacher's first memoir, 'Wasted', and in the same take-no-prisoner style that is hers almost exclusively, gives readers a first-hand glimpse inside the head and heart of a typical victim of the insanity that is (untreated) bipolar. She is honest and unapologetic, she is in-your-face, and she is raw. I sympathized with Marya so much in this memoir that I couldn't help but feel elated when she found moments of peace, and desperate during each of her countless hospitalizations...even if some of them were hastened by her own hand. She shows readers that a person can be both severely mentally ill and outrageously successful at the same time. She dispels many myths about mental illness in this book, as she did with eating disorders in 'Wasted.' Marya Horbacher is brilliant, and the unimaginable setbacks she has suffered in her young life have done nothing to change that; in fact, they have made her stronger and infinitely more compassionate. With a quick wit and self-deprecating humor, Ms. Hornbacher has penned another brilliantly intense memoir that, in my opinion, is on-par with any of Elizabeth Wurtzel's writings, and perhaps even better.
Trustpilot
Copyright © 2022 Thriftbooks.com Terms of Use | Privacy Policy | Do Not Sell or Share My Personal Information | Accessibility Statement
ThriftBooks® and the ThriftBooks® logo are registered trademarks of Thrift Books Global, LLC