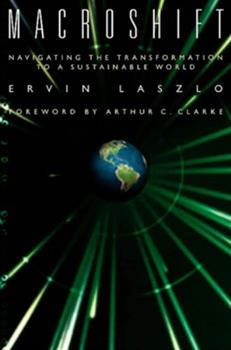 Macroshift: Navigating the Transformation to a Sustainable World

We live in the midst of one of the greatest technological revolutions in history, an era of deep-seated transformation-a macroshift in civilization, says preeminent scholar and futurist Ervin Laszlo. Its signs and manifestations are all around us, from the deadly HIV/AIDS epidemic sweeping Africa and the dangerous fire-trap sweatshops routinely killing workers in Bangladesh, to the environmental havoc created by genetic engineering, power plant pollution...

Published by Thriftbooks.com User , 13 years ago
This eye and heart-opening book - just like "You Can Change The World" by the same author - is a must read for each and every human being whose consciousness is gradually awakening to the problems that humanity shares on our beautiful planet. The more it is being read and the pieces of advice adhered to, the more planetary consciousness will spread and take a lasting effect in the minds and hearts of our fellow inhabitants on planet earth. May the book's vision NOT turn out to be wishful thinking.

We need a "fundamental revolution of consciousness".

Published by Thriftbooks.com User , 17 years ago
Ervin Laszlo has a formidable international reputation as a systems philosopher and the founder of general evolution theory. He has written around 70 books covering a wide variety of fields. His style is lucid, direct and very readable. This book is a brilliant addition to dialogue on an issue that desperately needs clear thinking and the ability to challenge ossified mindsets in a way that is constructive rather than merely strident. It is thoughtful, sober and constructive, in contrast to so many books in this genre that are slick and sensationalist. Laszlo makes a carefully argued case that the world is in a rapid and fundamental transition, which will become critical during the years 2001 to 2010. Whether the outcome is 'breakthrough' or 'breakdown' depends primarily on building a 'fundamental revolution of consciousness' among a critical mass of people. The three parts of the book describe the concept of a 'macroshift', historical examples of previous macroshifts and the choices before us the 'new imperatives' and the logic underlying them; and the way ahead.

The Definitive Guide to the Global Crisis...

Published by Thriftbooks.com User , 19 years ago
As much as it is possible for a single book to give its reader a comprehensive and profound understanding of the impending global social, economic, and ecological crisis, this is that book. According to Dr. Laszlo, human society has passed through three major stages --Mythos, Theos, and Logos--and is on the verge of its next, and perhaps final stage, Holos. But the transition from our Logos civilization to Holos, like those before it, is not quite as automatic as someone simply climbing the rungs of a ladder. According to _Macroshift, there is some real possibility that our civilization may fail to make the leap, in which case it will almost certainly 'break down' into global anarchy--we may have had a terrible foretaste of this in the September 11 attacks. (For a chilling picture of this kind of world, see the classic sci-fi film _The Road Warrior_). But, should it succeed, humanity will be privileged to witness the birth of the first truly global civilization--and a world whose possibilities surpass our dreams.

Published by Thriftbooks.com User , 20 years ago
Macroshift: Navigating The Transformation To A Sustainable World by Ervin Laszlo (Science Director, International Peace University, Berlin, Germany) is a powerful and revealing look at the rapid pace of globalization and the profound shifts it has cause in the world economy and ecology. Laszlo projects and details two possible futures - the "Breakdown", where overly polarized wealth causes the supreme stratification of society and the world culture drifts toward anarchy, and the "Breakthrough", where humanity transforms itself into a new era of world prosperity. Macroshift is a ground breaking, fascinating, challenging examination of the past, present, and future of a rapidly modernizing world.

Macroshift:Navigating the Transformation to a Sustainable Wo

Published by Thriftbooks.com User , 20 years ago
Macroshift is a book which I recommend to anyone who feels they can change the world and make a difference.And this book is for everyone. At times it is hard reading, but it is worth it. What intriqued me most was the prediction that author Ervin Laszlo had that we would enter a period of chaos, followed by a clear choice of two different scenarios for the people of Planet Earth. Dr. Laszlo predicted the chaos would come around 2005, but it came earlier on September 11, 2001, but he does not leave you without a solution. Step by step he takes you through the breakdown or the breakthrough scenario and the choice is clearly ours. We can only change the world to the degree that we are willing to change ourselves. Dr. Laszlo not only offers his well-researched personal thoughts and opinion, but provides twelve additional 3-4 page commentaries by some of the best thinkers today. Riane Eisler, Thomas Berry, Robert Muller, Gary Zukav and eight more members of the Club of Budapest share their thoughts on our global emergency.I really liked reading what others had to say. Dr. Laszlo mentions that he founded the Club of Budapest to bring global consciousness to every human on Earth. No short order by this dreamer for a better world..but Macroshift helped me see the necessity of a shift in my thinking.
Trustpilot
Copyright © 2022 Thriftbooks.com Terms of Use | Privacy Policy | Do Not Sell or Share My Personal Information | Accessibility Statement
ThriftBooks® and the ThriftBooks® logo are registered trademarks of Thrift Books Global, LLC