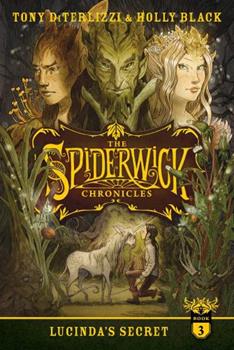 (Book #3 in the The Spiderwick Chronicles Series)

by Holly Black and Tony DiTerlizzi

The Grace children turn to Great-Aunt Lucinda for help in this repackage of the third book in the #1 New York Times bestselling Spiderwick Chronicles. As if being attacked by goblins and a bridge troll weren't enough, Jared is now being targeted by Thimbletack. Simon is keeping an injured and very hungry griffin hidden in the carriage house. And Mallory is convinced the only way to get things back to normal is to get rid of the Guide. But that doesn't...

For my sake the fruit forbidden

Published by Thriftbooks.com User , 16 years ago
I know I say this with every review of a "Spiderwick Chronicle", but it's remarkable how clever, how intelligent, and how downright well-written these books really are. And now I have a new praise to add, with the reading of the delightful "Lucinda's Secret". I can say that author Holly Black not only knows her fairies but also knows her fairy lore. In this latest installment in the popular series, Black incorporates Christina Rossetti's "Goblin Market" alongside a fast-paced story of three children battling the fairy world. At the heart of these tales, however, is the story of Jared's struggle against his own violent tendencies and the ways in which he cares for his siblings. Jared still refuses to give up Arthur Spiderwick's Field Guide to the Fantastical World Around You. This in spite of the fact that he and his siblings were recently attacked by goblins and his twin brother Simon was nearly roasted over a spit. Mallory and Simon are certain that just giving up the book would solve all their problems, but Jared's not so sure. To answer these questions the children (finally) go to visit their Great-Aunt Lucinda, currently living in a home for the mentally ill. Lucinda tells them the dangers of living in their house as well as the fact that the book is a danger. Unfortunately for them, Thimbletack the house brownie/boggart has stolen the book himself and it quickly becomes clear that after an encounter with a phooka and some elves that EVERYBODY wants what the children can no longer find. The book takes a turn for the darker (though admittedly the eaten pet cat in the last book was a bit bleak) when Lucinda's fate is fully known. Having made the mistake of eating fairy food (a bit of a no-no no matter what book you're reading) she is forced to eat only fairy food for the rest of her life. Moreover, she describes a somewhat gruesome way in which the goblins attempted to find the location of the book through her. Otherwise, the story's the same interesting and fully entrancing tale as its predecessors. More creatures and characters have appeared and we finally learn the name of the villain behind all of this: Mulgrath. Throw in the possibility that Arthur Spiderwick may still be alive somewhere and you've got yourself one heckuva engrossing tale in a mere 108 pages. In many ways, this is perhaps my favorite installment of the "Spiderwick" series thus far. And with two more books to go, it promises to continue to be riveting until the very end. Well worth the purchase.

Published by Thriftbooks.com User , 17 years ago
I loved these books! They were so much fun! It was so exciting and it kept you on the edge of your seat.

Faeries, Griffins and other "Mythical" Creatures...

Published by Thriftbooks.com User , 17 years ago
...can be found in this truly entertaining children's book. This is a quick and easy read for even the most stubborn of readers. I thourougly enjoyed it and can't wait for the next book. I am intrigued and entertained by the Grace children and their meetings with the "mythical" creatures. The creatures may be myth to most, but the Grace children know the truth.The illustrations are gorgeous and descriptive. You don't need any descriptions with Holly Black's wonderful writing, but Tony Di Terlizzi just makes this book more amazing than it already does. All children should be able to have books like this available for them.

Published by Thriftbooks.com User , 17 years ago
The Spiderwick books are my new favorite series. I think they are the best because they have adventure and they are creepy and funny. I love all of the creatures like the faries and the elves.I have been asking for Book 4 every daybut it is not in stores. I can't wait until April when the book is out and that ois also when my birthday is and it will be the best present ever. Buy this book.You will love it!

Published by Thriftbooks.com User , 17 years ago
My nine year old son has had such a hard time trying to muddle through the thick "Harry Potter"/"Lord of the Rings" books. He wants to read them but their just too difficult for him. He has been so discouraged about reading. I ran across these books for Christmas and bought all three. He thinks there so COOL and loves to read them! I haven't had to poke or prod him at all. The children in his 4th grade class have even begun passing them around. The school library has ordered them upon the kids request. Please keep them coming! Impatiently awaiting number four!!!!
Copyright © 2020 Thriftbooks.com Terms of Use | Privacy Policy | Do Not Sell My Personal Information | Accessibility Statement
ThriftBooks® and the ThriftBooks® logo are registered trademarks of Thrift Books Global, LLC