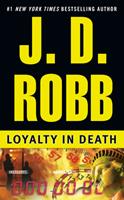 In this novel in the #1 New York Times bestselling series known for its tantalizing blend of romance, suspense, and futuristic police procedural, New York cop Eve Dallas faces her most ingenious foe: a "secret admirer" who taunts her with letters...and kills without mercy. An unknown bomber is stalking New York City. He is sending Eve Dallas taunting letters promising to wreak mass terror and destruction among the "corrupt masses." And when his cruel...

Published by Thriftbooks.com User , 17 years ago
Since J.D. Robb decided early in this series to split the Lieutenant Eve Dallas / Feeney team, introducing Peabody as Eve's new partner instead, we have been seeing this funny and appealing character (Delia Peabody) obtain more and more significance in the story line. In this case we witness a significant leap in Peabody's relevance with her having to face two different issues besides the current case in which she is involved assisting Eve. The first one is that McNabb (Feeney's current aide / partner) is finally accepting that he is in love with Peabody and has started to look at things in a different way. The other one is that she receives the visit of her brother Zeke, a free ager that is not totally adapted to the "normal" life in the city, but who has come to live with his sister while he works in a project for a married woman with whom he is falling in love. Of course, Eve Dallas continues to be the main character in the story, and in this book she is involved in a couple of different cases. One of them is clearly bothering her, because a woman killed her husband with a drill and then cut a deal with the district attorney, getting a considerably milder sentence than the one she deserves according to Eve's standards. The other case involves one of Eve's weasels, the Fixer, who was murdered in an explosion by a group called Cassandra. This organization is now blowing up other buildings in the city, all of which belong to Eve's husband, the billionaire Roarke. As with most of the other novels in the series, we find an action packed book that captures our attention right away and plunges us into a frantic race. Robb continues with her good job regarding character development, which as I mentioned focuses more than anything on Peabody and her relationship with McNabb. All of this is fairly balanced with the love scenes that are characteristic of the work of this author. Overall, this is an excellent read; I cannot wait to get to the next novel in this series.

The "past" of this future is scary

Published by Thriftbooks.com User , 20 years ago
In this volume of the "in Death" series, we learn far more about the "past" of the series - their past history, still in our future. The series is set in the 2050's; however, the events of this book flow from events thirty years in their past, in the 2020's. This gives us more of an idea of why the New York of Eve Dallas' time is the way it is.If you are new to the series, you may find it helpful to read some of the previous books as well - while each book in this series can stand alone as a police procedural/thriller, it is more fun if you can also follow the background stories of the personal lives of our characters. Eve Dallas is our police lieutenant hero, of course, and her husband Roarke (just Roarke) is his rich, enigmatic self. The interaction between Eve's sidekick/aide Peabody, and fellow cop McNab, gets tenser in this book (think elevators!). Mavis, Eve's best friend, is having success with her singing career. All of these background sub-plots are one of the fun parts of the series. It's a tradition that hangs over from police procedural series started more than 40 years ago, such as Ed McBain's 87th Precinct series, and it's nice to see Robb pay homage to that great tradition.The plot of this particular volume involves a terrorist group destroying New York landmarks, a theme that will perhaps resonate even more with readers now (I write this review in Jan 2002) than it did when the book was first published. It is poignantly sad to see that on the list of proposed targets is the Twin Towers - I had to shake my head and say, sorry, the terrorists didn't wait that long... The final target, and the culmination of the book, will keep you awake and reading. And who the terrorists are will make you think, about how such things carry on through the generations, and contemplate how we could go about trying to break that cycle.

Published by Thriftbooks.com User , 20 years ago
This addition to the "in Death" series, Loyalty in Death, has a group of terrorists named Cassandra planting bombs to kill alot of people. There are no demands being made at firstm, and there doesn't seem to be a motive for the bombings. Eve figures out , that the terrorist groups roots began many years before. The ending is very intense as both Eve's life, and Roarkes, are threatened as they close in on the main source behind this group. This was the best book yet in this excellent series! I don't know how Nora Roberts (a.k.a JD Robb) does it, but she keeps whipping out really great stories! The "in Death" series has been very exciting to read each book, and getting to know the characters a little better with each book!

Published by Thriftbooks.com User , 22 years ago
I've read the whole series, in order, and this is the best book of the lot. The romance between Eve and Roarke continues to develop, and Peabody and McNab seem to be going their own way as well. If you like strong, gutsy heroines and men with a sense of humour, as well as a touch of futurist fantasy, you'll enjoy this book. Fans of Honor Harrington, take note - were she in the same time and galaxy as Honor, Eve would give our girl a run for the money. I hope Ms. Robb continues this series for as long as she can - it's one of the better ones, with enough touch of darkness to keep it interesting and enough romance/sex to keep it fun.

Published by Thriftbooks.com User , 22 years ago
Are you new to the "...In Death" series? Go back andstart at the very beginning, Naked in Death. Only then , you'll feelSMUG like the rest of us. Because we, the readers of all 8 books, understand all the "inside" jokes, nuances and situations. We've been through thick and thin with the whole crew: Eve, Roarke, Peabody, McNab, Mavis, etc. As much as I love Eve, she can be frustrating with that cold attitude of hers. Lucky for her, she's married to the eternally patient Roarke. And speaking of Roarke -he's the only smoker I would let into my life. (The image of him in his white satin shirt, smoking one of those long, cigarello type cigarettes, and a brandy in his other hand....Damn sexy!) I love this series! But does the lack of a preview at the end of this book indicate that this is the end of the series? Let it not be so!
Trustpilot
Copyright © 2022 Thriftbooks.com Terms of Use | Privacy Policy | Do Not Sell or Share My Personal Information | Accessibility Statement
ThriftBooks® and the ThriftBooks® logo are registered trademarks of Thrift Books Global, LLC