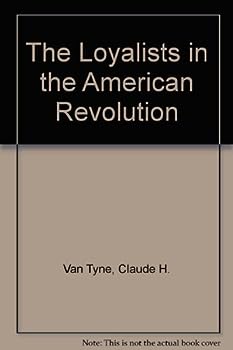 The Loyalists in the American Revolution

This description may be from another edition of this product. The Loyalists constituted the majority in some colonies, and a very large minority in the colonies as a whole. This is the history of those 100,000 or more Americans who were driven into exile in...

Published by Thriftbooks.com User , 16 years ago
This is a page-turner. After reading this book (and I know I'm going to draw fire on this one), it's clear to me that the American Democrats are the political descendants of the Revolutionary War Patriots, and the Republicans of the Tories/Loyalists. I'll tell you why below. This book is about those Americans before and during the Revolutionary War who did not want to divorce themselves from the King of England. These were of course mostly the rich and powerful - those who had most to lose by a change in the status quo. What happened to them is the gripping tale that is the focus of this book. The author paints in vivid and minute details as he tells the stories of countless colonial Americans who refused to become "patriots": where they went to keep safe, how they were punished if caught, what happened to them after the war, how obsequious they were to the British in charge - and how these British despised them as much as they did any other American. One very interesting point made: the masses turned neither Patriot nor Loyalist. Reminds me of Americans to this day, most of whom are neither Republican nor Democrat - or at least not strongly enough to take action one way or the other. Like their Loyalist fathers before them, rich and powerful Americans today flock to the Republican Party. They hate change. Why shouldn't they? One sometimes suspects that many would gladly chuck democracy, if that's what it would take to keep their power.

Published by Thriftbooks.com User , 17 years ago
This is one of the top 3 books ever written about the Loyalists during the American Revolution. It describes their politics, their life as soldiers and their relations with the British. It is shameful how books lump the Loyalists in with the British, when they are clearly just Americans fighting for their beliefs and their country, as they saw it at the time. Considering their numbers, the loyalists should never be forgotten. I especially liked the reprinting of the Loyalist version of the Declaration of Independence (from Congress). It truly does show that history is not what you are taught in school. A+

Excellent history of the Loyalist plight during the war.

Published by Thriftbooks.com User , 21 years ago
Van Tyne's work is widely quoted and referenced in subsequent, less intense works on the plight of the Loyalists during the American Revolution. His intense research of newspaper accounts, letters, journals and papers of prominent loyalists of the period, has resulted in a work which is considered today a classic. The files of the Loyalist newspaper "Rivington's Gazette" proved to be invaluable regarding the plight and activities of the Loyalists. Van Tyne looks at the origin and evolution of the Loyalists movement, anti-loyalist legislation by the revolutionary government, and treatment of Loyalists including confiscation of property and restriction of civil liberties. He also addresses the British governbment's attitude and policies toward the Loyalists, their support and compensation during the war along with the British army involvement in the raising, support and joint operations with Loyalists units in the Colonies. Three appendices address Loyalists declarations, test laws by different states to restrict activities and principle laws enacted against Loyalists by each state. Van Tyne was awarded the Pulitzer Prize in 1930 for his work on the American Revolution. This is an excellent, readable, well documented work.

An essential reference book regarding loyalists.

Published by Thriftbooks.com User , 25 years ago
One of the first and, I believe, one of the best comprehensive studies of American loyalists. Certainly an important starting point for anyone seriously interested in studying loyalism. It's clear and to the point. It also manages to avoid sentimentalizing its subjects
Copyright © 2020 Thriftbooks.com Terms of Use | Privacy Policy | Do Not Sell My Personal Information | Accessibility Statement
ThriftBooks® and the ThriftBooks® logo are registered trademarks of Thrift Books Global, LLC