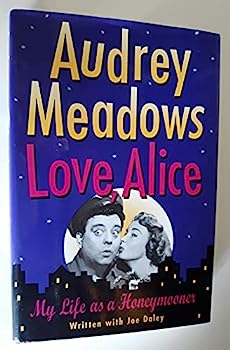 Love, Alice: My Life as a Honeymooner

In an engaging, often humorous memoir, the Emmy-winning actress recalls her years playing Alice Kramden opposite the inimitable Jackie Gleason on one of the most popular TV series of all time, The... This description may be from another edition of this product.

Published by Thriftbooks.com User , 13 years ago
"Love, Alice: My Life as a Honeymooner" is described by its author as a love letter to Jackie Gleason, and indeed it is. At times defensive, always revealing, this glimpse into the classic Gleason show satisfies both as a source of technical information and a study of The Great One. Miss Meadows is generous with details, and also with photographs, including the "dreary housewife" photos that got her the job. A superior memoir, and a must-have for Gleason fans.

Published by Thriftbooks.com User , 15 years ago
"Love Alice" offers a lot of insight to the man himself, Jackie Gleason. Along with stories about Gleason's friends and drinking buddies, cast members, writers, and crew members during the Golden Age of Television, the 1950's. It also includes a number of shared memories concerning the filming and production of the earliest episodes of the "Honeymooners", of which she was such an intrical part. The only thing I wish Ms. Meadows had included in her book, would be a chapter or two of backstories dealing with each episode of the "Classic 39" Honeymooners, sharing behind-the-scenes production trivia of each episode, since I have them all on DVD and enjoy watching them repeatedly.

Gushing but quite interesting and entertaining

Published by Thriftbooks.com User , 19 years ago
Ms. Meadows tells fascinating stories of her years working with Jackie Gleason, although sometimes she heaps the praise on a bit thick. Nevertheless, this autobiography is an absorbing read and a must for any "Honeymooners" fan.

THE book for Honeymooners (and comic acting) into:

Published by Thriftbooks.com User , 20 years ago
The late Audrey Meadows was in some ways an underrated talent. True, she won an Emmy for her role as Alice on Jackie Gleason's classic The Honeymooners, which ran alternately as a sketch and for one season as an actual sitcom. If you ever want to see a TOP NOTCH comic actress at work see if you can get the Jack Benny Program (available on VHS)episode where Benny and his crew recreate the Honeymooners -- with Meadows playing Alice. No matter what the substitute cast does, she stays 100 percent in character as Alice. This WONDERFUL book is chock full of info about her special chemistry with The Great One Jackie Gleason (to younger readers: he was the inspiration for Fred Flintstone and she was the inspiration for Wilma) both on and off the screen. This delightful book gives glimpses of the Honeymooners' stars lives on and off the screen, ,recounts key happenings on epidodes and traces the history of the show's various revivals in the late 60s and 70s. HOWEVER: I strongly disagree with those who view this kind of book as nostalgia. It has valuable tips for anyone interested in acting and comedy. Gleason seldom rehearsed and she had a host of body language signals to help him with a line or move in a certain direction. As an entertainer (I'm a ventriloquist) I have always found one thing she said and writes here vital information for someone in a comedy team (even if your partner is wooden): When Gleason was doing key lines she generally froze. She reacted but kept movement, etc. to a minimum to keep the focus on him. Another tidbit: she was initially rejected by Gleason for the part of Alice (too pretty) so she had her picture taken when she woke up, without make up, and when it was submitted to him he KNEW this person (who he forgot he had seen and would not have recognized anyway) was his Alice. You can sense her awe of and fondness for Gleason from start until she recounts his sad cancer death (she later died of cancer as well). She also sketches other cast members such as Art "Ed Norton" Carney so they come alive on paper. You sense the unappreciated professionalism of this actress who made doing these classic comedies actually done "by the seat of the pants" seem so easy, effortless and rehearsed.

Published by Thriftbooks.com User , 21 years ago
Audrey Meadows is one of the greatest actresses of all time and is a definite legend. This book tells of her times while filming The Honeymooners and then some. An absolute must-have for all die hard Honeymooners fans like myself!
Copyright © 2022 Thriftbooks.com Terms of Use | Privacy Policy | Do Not Sell My Personal Information | Accessibility Statement
ThriftBooks® and the ThriftBooks® logo are registered trademarks of Thrift Books Global, LLC