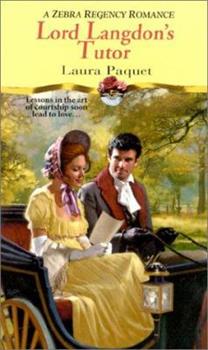 Determined to marry for love, Lady Clarissa rejects the lord that her father has chosen for her to marry. Lord Langdon would prefer a businesslike marriage free from sentiment, so he persuade Clarissa... This description may be from another edition of this product.

Clarissa refuses to be sold to the highest bidder.

Published by Thriftbooks.com User , 21 years ago
Lady Clarissa is determined to marry for love or not at all. Unfortunately, her father has promised her to a young lord in the market for a wife only to lend more respectability to his career in the House of Lords. Her refusal to his arrogant proposal makes him angry, but he knows that she is the one who faces the most serious consequences. When her father finds out, he will certainly send her to her crotchety aunt in the country as an unpaid companion. So perhaps she will consent to a pretend courtship to help him learn how to properly court a woman in an attempt to stave off her father's anger for awhile until she can make plans on her own, such as escaping to Canada with her former governess.Although the plot is predictable and the hero a little slow to realize his true feelings, this is an enjoyable story with delightful characters that I heartily recommend for any Regency lover.

A good start from a new author.

Published by Thriftbooks.com User , 21 years ago
In Laura Paquet's debut Regency romance, she starts with quite an interesting premise, "What might happen if a lady said no to a previously arranged marriage?" Lady Clarissa Denhan turns Lord Langdon's very unromantic proposal down flat. Before her father learns of this news, however, Lord Langdon suggests a temporary arrangement, which gives Lady Clarissa a small reprieve from her father's wrath. Knowing that his social skills need help, Lady Clarissa agrees to tutor Lord Langdon in the ways of society, especially courting women.In this story both Lady Clarissa and Lord Langdon know exactly what they want, and after a first glance, they figure out that it is not each other. Lord Langdon wants to spend no time courting a woman for what he considers a business arrangement whereas Lady Clarissa insists upon romance. Lord Langdon wants a wife as soon as possibly while Lady Clarissa prefers her independence. However, during their "lessons" they begin to find out what is underneath the surface, gradually learning that they like each other. The author keeps the characters moving. Not only are they continually out and about, but the author keeps them growing. We get to know Lady Clarissa and Lord Langdon as well as their family and friends. The supporting characters add delightfully to the story, especially Lord Langdon's easygoing friend Spencer who provides a fresh point of view for Lord Langdon.I look forward to new arrivals from Laura Paquet. She provides an interesting ride through Regency England.
Copyright © 2022 Thriftbooks.com Terms of Use | Privacy Policy | Do Not Sell My Personal Information | Accessibility Statement
ThriftBooks® and the ThriftBooks® logo are registered trademarks of Thrift Books Global, LLC