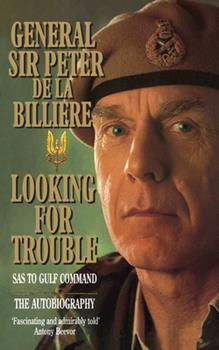 Looking for Trouble: SAS to Gulf Command - The Autobiography

From his childhood, rebellion at school, the early death of his father and conflict with his step-father, on to his exploits in the army in Korea, Egypt, Malaya, Oman, Borneo, the Sudan, the... This description may be from another edition of this product.

The very concept of leadership revealed.

Published by Thriftbooks.com User , 14 years ago
General Sir Peter De La Billière ranks amongst the greatest of post-World War Two British military commanders. He served in every conflict from Korea to the first Gulf War and ended that career as a full General with two Knighthoods (Knight Commander of the Bath and Knight Commander of the British Empire - the latter of which superseded the CBE awarded previously) a DSO, two MCs and a Legion of Merit. He was in charge of the British special forces who so successfully stormed the Iranian Embassy in London in 1980 bringing swiftly to an end that very public siege. In 1990 he was the British Forces commander under General Norman Schwarzkopf in the first Gulf War. It is interesting to note that he failed Staff College (a pre-requisite qualification for higher military office.) at his first attempt. In this book, which has caused something of another storm - if only because the SAS do not like people writing about their activities (especially former members of the Regiment), the General tells it exactly as it was. As another reviewer said "it should be essential reading for anyone seeking to lead people" - and not just military personnel. Leadership and responsibility are, by their very nature stressful activities - especially for those who care. Whilst not wishing to belittle - in any way whatsoever!, the stress associated with civilian occupations, stress under fire is probably the greatest stress of all. As General Norman Schwarzkopf said when being interviewed on television; "It doesn't take a hero to order men to their deaths!" It was that single statement which revealed "his" own caring nature. Of course, there was a time when British (and other) generals did order men to their deaths in their hundreds of thousands. Today, that particular carnage is remembered as the trench warfare of the First World War. From this book, we are able to learn and understand the intricacies, professionalism and technical detail of how the SAS approach specific problems, how they deal with matters - even those which do not require soldiers operating in covert situations, and, in so doing, we learn how being a general has evolved since those unforgivable times of 90 years ago. Having once been attached to the SAS, I can certainly say that no state secrets are betrayed here. Instead we have an understanding of how and why certain people, with a certain background, adopt a very different approach to certain problems. It's all in the training, it's all a matter of understanding the principles involved and when those leaders of people from non-military occupations read this book, they too will begin to understand the very concept of leadership itself. I thoroughly recommend this book. It is written by a great man who will always prefer the background to the spotlight for that is his nature. NM Retired British Army Major

Inspirational story of success from an unpromising childhood

Published by Thriftbooks.com User , 25 years ago
In his autobiography, Peter de la Billiere, gives a very exciting account of his military and civilian life. From an umpromising childhood he fell into and found his niche in the British army. There are many interesting chapters covering his various feats in Korea, Malaysia, the Midddle East, Northern Ireland, the Falklands and the Gulf War. I found the details of his various postings with the SAS to be of particular interest. The only annoying area is his insistence on using "I, myself" and "We, ourselves" throughout the book. Also, he speaks of a man being "Hung"! Grammar aside, De la Billiere is clearly a man who enjoys life and a man to be admired. Well worth the read for fans of military history or people who are just interested in a good adventure.
Trustpilot
Copyright © 2022 Thriftbooks.com Terms of Use | Privacy Policy | Do Not Sell or Share My Personal Information | Accessibility Statement
ThriftBooks® and the ThriftBooks® logo are registered trademarks of Thrift Books Global, LLC