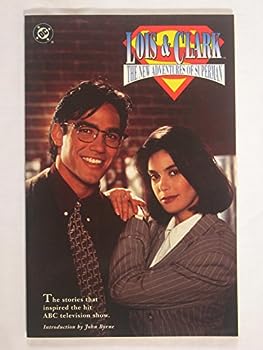 This description may be from another edition of this product. Clark is in love with Lois. Lois likes Clark, but she is in love with Superman. Clark is Superman, but he can't tell Lois! And to complicate matters further, Lex Luthor, Superman's arch enemy, has...

Published by Thriftbooks.com User , 13 years ago
this is a great paperback that shows snapshots of Lois and Clark's interractions and how their relationship developed. I have read a lot of the Man of Steel paperbacks and this shows a few stories from that as well as others. It also shows the story of Hank Henshaw and his wife and two teammates. When I read Superman returns, the cyborg superman is Hank Henshaw, so it filled in some origin questions for me. This is a great read if you are a Superman fan and just want to know more about who he is and how he became the man that he is. Hope I didn't spoil too much.

The comic book stories that inspried the television series

Published by Thriftbooks.com User , 17 years ago
"Lois & Clark: The New Adventures of Superman" supposedly brings together the comic book stories that inspired the ABC television series. But if you watched the television series with Dean Cain and Teri Hatcher do not expect to read any stories that will remind you of specific episodes. What you will get is a sense of how "Lois & Clark" reflected the new and improved version of the Superman mythos that was created in 1986 when writer-artist John Byrne revamped the Man of Steel. That is why the most interesting part of this collection is Byrne's introduction where he explains his thinking on changing the dynamic between Lois Lane and Clark Kent. Although the decision to have Ma and Pa Kent still in alive when Superman was an adult was seen as the most controversial element of Byrne's new mythos, the keystone to freeing the character of Lois Lane from the strictures of the past was the simple exercise of eliminating global knowledge that Superman had a dual identity. No longer was Lois trying to figure out who Superman "really" was, which meant she no longer had to be constantly working on some scheme to find out that secret identity. This also meant that when Lois met Clark Kent all she saw was Clark Kent, the man who got his job at the "Daily Planet" by beating her to the first exclusive on "Superman" ("The Story of the Century"), which is not something that would endure him to her. But in the end, Byrne decides something even more radical with the infamous "Triangle Built for Two," because this time around Lois is going to end up loving Clark as much as he loves her from the start. The big secret in this new version is that Superman is the secret identity and Clark Kent is the real person. That is why it had to be Clark than won Lois' heart and not the superhero. Unfortunately, that is only touched upon in the comic book stories from 1986-90 that are reprinted here (e.g., "The Limits of Power" and "Survival"). What you get more often are the inevitable problems that arise when a third party enters the picture (e.g., "The Name Game"). You also have stories where Lois & Clark are spending some serious time doing reporting. "Tears for Titano" is basically an illustrated Lois Lane piece. There is also a nice Lex Luthor short, "Metropolis - 900 mi," and "Home for the Holidays" is a Christmas story that glosses over the fact that Clark is about to leave the "Planet." While the first story is the most important for the new Superman mythos, the last two are the best stories in the collection although they have nothing to do with inspiring the television series whose stars appears on the front and back cover. Byrne is responsible for half of the offerings while Jerry Ordway, Roger Stern, Dan Jurgens and others write and draw the other half.
Copyright © 2020 Thriftbooks.com Terms of Use | Privacy Policy | Do Not Sell My Personal Information | Accessibility Statement
ThriftBooks® and the ThriftBooks® logo are registered trademarks of Thrift Books Global, LLC