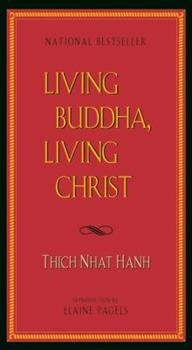 A Vietnamese monk and Buddhist teacher explores the common ground of Christianity and Buddhism on such subjects as compassion and holiness, and offers inspiration to believers in both religions.

Published by Eric , 1 year ago
A no nonsense teaching of how to be happy in this world from the great master.

Published by Thriftbooks.com User , 12 years ago
This is a great book for thinking about the shared spiritual essence of Buddhism and Christianity. When those of different faiths disagree, they do so on points of dogma. About charity, compassion, or love, there is no disagreement, especially when these are manifest qualities of a spiritual life. Thus "the letter kills, but the spirit gives life". This is a book primarily about the spiritual life, and the unity thereof, although it also discusses the similarities and differences of specific teachings of Buddha and Christ.

Published by Thriftbooks.com User , 13 years ago
I highly recommend this book to anyone but especially if you believe in the 12 Steps of recovery. This book helped me greatly in improving my attitude toward anyone regardless of their sex, religious back ground, race and etc, etc....

Published by Thriftbooks.com User , 14 years ago
As a Roman Catholic I was delighted with the comparative look at our faith and that of the Buddhist tradition. The information and elightenment this little book provided was expanding. I suggest this book for all Christians who desire to see that peace is not limited.

Published by Thriftbooks.com User , 17 years ago
All religions have as their common thread the Golden Rule expressed in Buddhism as: "Hurt not others with that which pains yourself" and in Christianity as: "Do unto others as you would have others do unto you". Almost certainly, if Jesus and Buddha were to meet today they would embrace each other and tell us that we have misinterpreted their teachings by permitting or perhaps even advocating religious intolerance, religious rivalry, religious hatred, religious fanaticism and religious war. It was therefore like a breath of fresh air to discover a Buddhist monk from Vietnam who thinks, speaks and acts the Golden Rule - a man about whom Martin Luther King wrote: "I Know Thich Nhat Hanh and am privileged to call him my friend. He is a holy man, for he is humble and devout. He is a scholar of immense intellectual capacity. His ideas for peace, if applied, would build a monument to ecumenism, to world brotherhood, to humanity". In 1947 in Egypt early Christian documents were discovered, believed to have been hidden after orders to destroy them as heretical were given by the archbishop of Alexandria. The Gospel of Thomas resonates with the Buddhist tradition. These long-hidden sources show that the early Christian movement contained much more diversity of viewpoint and practice than later Christians acknowledged or even imagined. Because these teachings were smothered, many Christians today are adamant that the only path to God is via Christianity. Shortly after Buddha died there were two schools of Buddhism; after 400 years there were 20 schools; and today there are many more. Each is an attempt to keep the Buddhist teachings alive under new circumstances. Likewise Christianity has splintered into many groups. It is only by respecting the differences within our own church and seeing how these differences enrich one another, that we can be open to appreciating the richness and diversity of other traditions.Thich Nhat Hanh is not a monk who lives in a hermitage and runs away from the world. For more than 30 years he has been active in combating poverty, ignorance and disease; rescuing boat people; evacuating the wounded from combat zones; resettling refugees; helping the hungry and orphans; opposing wars; training peace and social workers; and rebuilding villages destroyed by bombs. But he has only been able to do this because of the practice of meditation - stopping, calming and looking deeply. It is only through the practice of deep looking and deep listening, that we become free, able to see the beauty and values in our own and others' tradition and that we know what we should be doing in the world.This book is about interfaith dialogue. "In a true dialogue, both sides are willing to change. We have to appreciate that truth can be received from outside of - not only within - our own group. If we do not believe that, entering into dialogue would be a waste of time. If we think we monopolize the truth and we still organize a dialogue, it is not authen

A "Christ-like" View of Christianity

Published by Thriftbooks.com User , 20 years ago
This is an excellent book for anyone whose mind is open and not mired in dogma. No book can convince anyone who insists on being stubbornly dogmatic. I am a Christian. I practice meditation. The objective of meditation, Christian or Buddhist, is not to empty your mind of everything. The objective is to learn to see.Hahn does view Christ as a living person and a historical figure. In fact, he very pointedly remarks that most Christians seem to be more interested in Christian dogma than in what Christ actually did-the example he lived for all of us. By the way, "Living Christ" is part of the title. "Traditional" Christianity has much in common with the Pharisees of Jesus' day. Now that Hanh is living and speaking in a Christ-like way, it's not surprising that he's encountering resistance, misunderstanding, and intolerance. "Traditional" Christianity is what it is, not because of being true to itself, but because of being true to Western Civilization's ethos of valuing material things, exploiting nature, and controlling the masses for political gain. Christianity and Science (the modern religion) both struggle with the problems that arise from the presumed existence of an objective world. "Traditional" Christianity diverged from the teachings of Christ within the very first century of the Church. Hanh exposes this quite convincingly, as long as you're not afraid to see it. Some reviewers have suggested that a Buddhist such as Hanh has no authority in defining what Christianity is or what it means to be a Christian. Who does? The very labels "Buddhist" vs. "Christian" cause a divisiveness that is as unfortunate as it is unnecessary. Each one of us is a human being on a spiritual journey. Ultimate Truth is self-evident and cannot be expressed in any system of thought, language, or symbols. Does the Universe conform to a Buddhist view or a Christian view? Is a photon a wave or a particle? Authority ultimately resides with the observer.
Copyright © 2020 Thriftbooks.com Terms of Use | Privacy Policy | Do Not Sell My Personal Information | Accessibility Statement
ThriftBooks® and the ThriftBooks® logo are registered trademarks of Thrift Books Global, LLC