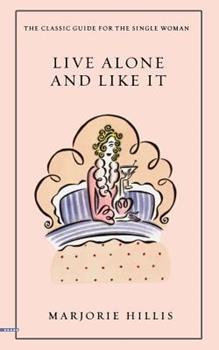 Live Alone and Like It: The Classic Guide for the Single Woman

"Whether you view your one-woman m nage as Doom or Adventure, you need a plan, if you are going to make the best of it." Thus begins Marjorie Hillis' archly funny, gently prescriptive manifesto for single women. Though it was 1936 when the Vogue editor first shared her wisdom with her fellow singletons, the tome has been passed lovingly through the generations, and is even more apt today than when it was first published. Hillis, a true bon vivant,...

Published by Thriftbooks.com User , 12 years ago
1936...People were listening to the Green Hornet on the radio, reading Gone with the Wind. Jesse Owens made history at the Olympics held in Berlin. Franklin D. Roosevelt is reelected to a second term. Events were set in motion that would lead to the second World War. In the United States, the role of women was more conventional than it is today, but nevertheless women began finding themselves competitive in the workplace, living their lives apart from their parents, unmarried, and having a marvelous time. Author Marjorie Hillis worked as assistant editor for Vogue magazine and was inspired by depressing tales of lone women wasting their lives, feeling sorry for themselves, or otherwise receiving a bad reputation from society at large. Her book "Live Alone and Like It" is a merciless appeal to single women living alone. Enjoy your life; do exactly as you please. Those that don't approve of you don't matter. What she had to say was, at the time, nothing short of revolutionary. Today, us single women like to think we're fantastically liberated, appreciated, secure in ourselves. In many cases, though, the opposite is still true. It cold, hard data, the attitude toward single women living alone is not much different than it was in 1936. If we're not prudish we're sluts; if we're professional, we're consumed by our work; if we're independent we're picky, dependent and we're clingy. This book, and others that have been written since, has provided a lit up and mind-expanding view on what it means to be a single woman living alone. In truth, it's fabulous, one of the best-kept secrets of our time. Enjoy the unconventional, refreshing language, quips, and tongue-in-cheek humor that was appropriate to the '30s but no less amusing today. Though you may not have your own personal maid, you may be no less able to appreciate the liberating intentions of the author, and learn how to make a killer cocktail in the meantime.

Published by Thriftbooks.com User , 13 years ago
Live Alone and Like It was originally published in 1936 and has all the charm of that time but still contains wise advice and guidance for women of any age and circumstance. Author Marjorie Hillis writes with such a snappy wit and humor that you will smile or laugh throughout the book. This small book can be read quickly but you will want to keep it for future references on: how to make a martini, when you should have an affair or making your new home charming, comfortable and chic. Hillis stresses that it is all about attitude. If you find yourself living alone, there are gracious, positive and even prosperous ways to take on your new independence and there are those things that you do not want to indulge in: self-pity, complaining about your circumstances and becoming, literally, a hermit. Any woman who finds herself being the "Extra Woman" must do things better, faster and more than other women. A plan is essential, and that requires knowing what kind of life you want and how you are going to get there. Hillis gives lots of savvy ways of doing simple things-some very dated but delightful and amusing. Some of it will make you wonder just how secretly progressive those mid-1930's women really were. Move over Suze Orman, Hillis said it all in 1936 in her chapter "You'd Better Skip This One." Saving and budgeting money is a necessary fact of life. With great insight into behavior (at least women's), she points out that buying something with your own money gives a deeper pleasure than having someone else pay for it. Even if you have to buy less, buy the best. To keep your savings safe and sound, it is necessary to read and learn about money management for yourself. To really enjoy Ms Hillis's wisdom and playfulness, take this book and a martini mixed as instructed into your chic bedroom while in your satin negligee and settle back into plumped pillows with the phones off. Armchair Interviews says: Quaint and current advice well given.

I yelped with joy when I saw that this book has been reprinted...

Published by Thriftbooks.com User , 15 years ago
...I've hunted down used copies for a half-dozen people, and now gift-giving will be a lot easier. This book is more than just a primer for living alone happily; it's a primer for living happily and independantly, no matter your age or marital status. While there's considerable "period" charm to be found in her stories and advice, this book is by no means a quaint period piece. It's packed full of (often very funny) practical wisdom that's just as vibrant for a woman living today as in the 1930s. Be warned, though: one thing Miss Hillis cannot abide is self-pity, so this book offers several invigorating slaps to those who see loneliness as "an affliction sent by Providence like a hare-lip, instead of self-inflicted torture, like a hair shirt". Her advice on living a rich and full single life is so inspiring that it's a bit of a pity to find out that she eventually forsook "the pleasures of a single bed." Highly, highly recommended.

Published by Thriftbooks.com User , 17 years ago
... to see that this book, first published in 1936, is being re-published. I discovered Marjorie Hillis Roulston through her second book "Orchids on Your Budget," a 1937 book for Depression survivors (the 1930's depression, not the modern kind) to help them keep up their spirits and appearances when in dire financial circumstances. I searched the net and found her other books, "Corned Beef and Caviar," and "You Can Start Again." All four books are delightful with a perky, saucy, just-between-us-girls tone that is absolutely charming. Imagine Carrie Bradshaw in a tailored suit, becoming hat, and white, wrist-length cotton gloves. One of the most captivating features of the book are the "cases." At the end of each chapter in each of the books, she describes individuals who have adopted her principles to their own benefit, or failed to do so, and are suffering the consequences. In one pair of cases, she describes two different girls-- yes, we're all just "girls," but it's okay-- who spend their weekends in contrasting ways. Girl A plans her time wisely, going for beauty treatments after work on Saturday afternoon, being served sherry and then dinner by the maid she had the foresight to hire for the day, spending Sunday morning in bed reading the papers and gossiping on the phone while attired in her best bed jacket, then concluding the weekend by attending evening Vespers, followed by a hot date. Girl B just piddles the weekend away and can't get her act together. I've read all four books so often that I get them mixed up, but she talks about entertaining in your apartment if you don't have a kitchen or access to any ice(!). The solution: a shelf stocked with foreign crackers, spreads in jars, cute knives, red glass plates from the dime store, and sherry. She makes the assumption that a single woman will not know how to cook, describes dinner parties ranging from one where you serve canned spaghetti in a chafing dish, to one where you venture gamely into ethnic neighborhoods to buy exotic tidbits, to one where you will need to hire a maid to help you cook-- "don't worry about how to make this dish-- any competent maid will be able to handle it." The books are endlessly fascinating for the window into an era and lifestyle far from today-- New York in the late 30's through the early 50's. There are probably some things in here that are sexist to today's sensibility, but you know what? who cares. The books are a treat from beginning to end. I would love to know more about Marjorie Hillis Roulston and regularly search the internet for anything about her. I recently found a reprint of an article by her in the publication of the Art Deco Society (art-deco.org). It seems that there may have been another book by her entitled "New York: Fair or Not Fair." I've had no luck finding it. If any relatives or descendents of Mrs. Roulston read this, I want to say to them that reading her books has given me hours of pleasure, and I bless her memory often.
Copyright © 2022 Thriftbooks.com Terms of Use | Privacy Policy | Do Not Sell My Personal Information | Accessibility Statement
ThriftBooks® and the ThriftBooks® logo are registered trademarks of Thrift Books Global, LLC