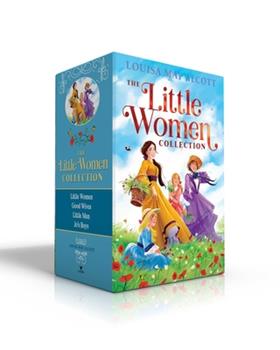 (Part of the Little Women Series)

Now a major motion picture starring Saoirse Ronan, Emma Watson, Timoth e Chalamet, and Meryl Streep Discover the entirety of Louisa May Alcott's enchanting tale of the March sisters for yourself--now together in one complete, beautifully designed boxed set The quintessential American family novel, Little Women captured readers' hearts right from the start. A bestseller from the time it was originally published in 1868, it tells the story of the beloved...

Published by Thriftbooks.com User , 13 years ago
I didn't read the book but I was very comfortable giving "Louisa May Alcott: Little Women, Little Men, Jo's Boys" to a friend as part of her 50th birthday gift package. She was ecstatic. Nothing brings back pleasant memories like an old movie, song or book!

Published by Thriftbooks.com User , 15 years ago
Never read this as a kid but watched all versions in the movies. The book was so much better. She's great writer, like Lucy Maud Montgomery and Mark Twain. Great american classic.

A World-Beating Trilogy of Human Kindness

Published by Thriftbooks.com User , 16 years ago
As I re-read these delightful pages, I found myself comparing Little Women to Pride and Prejudice, that outstanding work that captures human psychology so well. The comparison made me see new depths in Little Women that convince me that Little Women is by far the stronger work. But my biggest reaction was how modern the views in the book are. Women should have education, access to opportunities to develop their interests and marriage to men who will complement them. People should be concerned about each other and help one another, lest any person's life be harmed or feelings hurt in the process. I also noticed how complete a community of loving women can be within the same family. The writing style is beautifully spare. The key point of a chapter may turn on two or three words. And then, everything changes in the twinkling of an eye. Being a long book, Ms. Alcott has plenty of chances to develop her characters and she does so beautifully . . . allowing Meg, Jo, Beth, Amy and Laurie to grow and change as they age. I also came to appreciate more the scope of the book, taking the young women from teenage years through the first few years of marriage. It's a time period that few books consider. Usually, it's all over when the marriage happens. I like this approach better. Should you read Little Women? Does the sun rise in the East? If you haven't read Little Women, you've missed great role models for how to be a parent, spouse and child. Here's the story in a nutshell: During the Civil War, Mr. March is away serving as a chaplain in the Union army. Mrs. March (Marmee) and her four daughters are at home in the cold north making do on small income with the help of one servant, Hannah. As the story opens, the March family is facing a frugal Christmas. But events soon take an unexpected turn and their hearts are filled with gladness. Jo makes an unexpected and most humorous acquaintance of the Laurence boy (Theodore, known as Laurie) who lives next door with old Mr. Laurance, his grandfather. The two families draw upon one another for strength and friendships grow. Illness intercedes making the two families even more dependent on one another. One by one, the children move into adulthood, deal with their romantic feelings and form their alliances. The characters of each child are quite different, allowing Ms. Alcott to explore the contrasts by putting them together in various private and social occasions. Meg is beautiful and much admired. She should attract many suitors. Jo is energetic, self-absorbed and talented in writing (the character closest to Ms. Alcott herself). Beth is very kind and yet fragile. Amy is the social climber in the family . . . and the pet. Laurie has an artistic temperament, but finds himself expected to play an heir's role. You'll long remember with delight the stories of their thespian performances, games, dances and social visits. Although the book makes up a wonderfully detailed novel, the chapters are writ

Published by Thriftbooks.com User , 17 years ago
Louisa May Alcott is best known for her classic novel "Little Women," an enchanting look at growing up. But the story of Jo March didn't stop when she went to Plumfields. This collection includes not just "Little Women," but also its two sequels. "Little Women" introduces us to the four March sisters: pretty Meg, shy Beth, aspiring artist Amy, and tomboyish Jo. In the middle of the Civil War, the girls mature and explore the world, with the help of their mischievous male neighbor Laurie. But with their new freedoms and loves come sacrifices and heartbreak as well... At the end of the first book, "Mother Bhaer" adopted a small army of preteen boys in addition to her own sons. "Little Men" chronicles the growing pains of her boys -- some of them have been neglected, some are wild, some are nieces and "nevvies" of Jo's, and some just need the delightful chaos of a loving home. "Jo's Boys" wraps up the trilogy in a bittersweet manner. Jo's boys (and girls) have grown up and are starting to stretch their wings away from home, and are even starting to fall in love. Some of the boys have run-ins with the law, some have trouble pursuing the girls of their dreams, and one will risk his very soul -- and his love -- for something he believes in. With a much-beloved classic like "Little Women," it's pretty much a given that the sequels won't stack up. But "Little Men" and "Jo's Boys" are still a good mixture of humor, poignancy and "lovering." And of course, the original "Little Women" is one of the best coming-of-age novels of all time, as well as the best book that Alcott ever wrote. Alcott had a talent for writing realistic family stories and sweet romances, without letting them get dull. And she manages to create a colorful cast, from the mischievous Laurie and rambunctious Jo, to the gentle Marmee and the meek-to-mad cast of "Jo's boys." No matter how many characters Alcott wrote, she managed to give each one a personality. Louisa May Alcott created the lovable March family, and in the three-pack of "Little Women," "Little Men" and "Jo's Boys," we get to see three generations in action. Funny, poignant and sweet.
Trustpilot
Copyright © 2022 Thriftbooks.com Terms of Use | Privacy Policy | Do Not Sell My Personal Information | Cookie Preferences | Accessibility Statement
ThriftBooks® and the ThriftBooks® logo are registered trademarks of Thrift Books Global, LLC