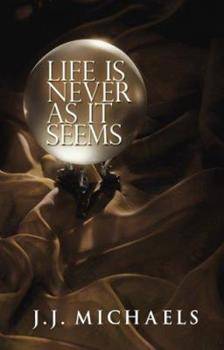 Life Is Never As It Seems

by J.J. Michael and June Michael

Lindy Lee comes from a family of preachers and secrets. Her grandfather, Reverend Perlie Johnson, like his father before him, is minister to a Baptist congregation, which reveres him. It is 1967 in Washington, D.C., and the streets and the media are filled with turmoil. Reverend Johnson intends to keep his daughter, granddaughter and congregation out of harm's way and obedient to their Christian faith. Nevertheless, Lindy receives messages from Mary...

Published by Thriftbooks.com User , 17 years ago
The title LIFE IS NEVER AS IT SEEMS by J.J. Michael is indeed fitting for the story of a young girl who is about to embark on a revealing journey of learning about the spiritual gifts she possesses. With a mixture of paranormal and scripture revelations, we're treated to an exquisitely written novel. Lindy, a graduate of Howard University, is an impressionable young lady who is kept under thumb by her mother and grandfather, who is pastor of Mount Olive Baptist Church. They are strict and insist that anything outside of the church or their home that Lindy is exposed to is the devil's work. However, there is another underlying reason why they keep tabs on Lindy - she has a gift that many would consider strange or weird. She has the gift to see what others cannot, such as when someone is ill. Her mother, Margaret, is a neurological mess with a mixture of hearing voices to jealousy because she fears her daughter is taking her father's attention away from her. The grandfather is trying to hold the family together, but is unsuccessful because he has several issues to work with also. Set in the era of the black power movement, Lindy is drawn into the environment and has a secret boyfriend named Nick. Living in a religious and dysfunctional household, she has to connive in order to leave the house to enjoy a social life with him. While attending a party with Nick at a professor's home, Lindy encounters a lady dressed in a hooded white robe. Unfortunately, she is the only one who sees and speaks with her, which sets the stage for Lindy seeking answers about her special abilities. J.J. Michael has written a very compelling story of a young lady's quest to learn about her gifts and goals in life. She eloquently writes with detailed precision the explorations of her character's love life and the sins of the grandfather and mother collectively as she travels toward the truth about her family and the legacy of her grandmother. As you hold on to each word, the scenes are magnified from page to page, allowing you to experience each character's dilemma, and their decision-making. The theories and explanations of biblical scriptures and other religious overtones are wonderfully outlined, and it really gives you the opportunity to ponder and reflect on life, God, and our human purpose. And finally what stands out is the ending because there is no ending; it's just the beginning that will open the door to a sequel to LIFE IS NEVER AS IT SEEMS by J.J. Michael. Reviewed by Kalaani of The RAWSISTAZ™ Reviewers

Published by Thriftbooks.com User , 17 years ago
I was spellbounded throughtout the reading of this book. I felt each character evolve. I could see their faces and read their minds. It was as if I was right there, a silent character. As an African American who is Baptist, I know this story well. Ms. Michael's account corresponds with my personal experiences. Her wonderful way of writing has me anxiously anticipating the sequel to this book.

A Sequel Is A Must

Published by Thriftbooks.com User , 17 years ago
From the moment I picked this book up, I was hooked. It felt as though I had been literally transplanted back to my college days at Howard University in 1967 when I was 20 years old. Every character felt so very real. Every incident was one I had known of or heard about throughout my own search for spiritual truth in the midst of a rigidly fundamentalist church environment. Lindy's commitment to her family as well as to the boyfriend despised by her family were both playing havoc with her rapidly growing inner thirst for spiritual fulfillment and realization. She had unusual gifts and an inner power craving to be set free. Plus, there just might be a genuine soul mate for her in God's plan. Until the very end, my heart was in my throat hoping Lindy would make the right decision. I can't wait for the sequel. Kudos to JJ Michael.

Published by Thriftbooks.com User , 17 years ago
Ms. Michael engages the reader to remember their own life history identifying through her vivid portrayal of characters from the 1960's in Washington D.C. I enjoyed reading this book very much. When I did put 'Life Is Never As It Seems' down, I found myself thinking about the characters and wondering what was going to happen next. This is the mark of a great writer. Bravo!!! Can't wait for the sequel! Sharyn Leigh Sedona, Arizona

Published by Thriftbooks.com User , 17 years ago
I was able to obtain a reviewer copy before the release date of this book and I could not put this book down. The author successfully weaves the characters together for the makings of a good drama mixed with moments of comedy and great adventure. Although the main character, Lindy is not introduced immediately, you definitely become entranced with what Lindy is going through from her home life with her grandfather and mother, to her boyfriend Nick (with his secrets) to the other characters she encounters that either help her to understand her gifts/abilities or to destroy her because of those same gifts/abilities. The novel is set during the 1960s in Washington, DC...although a short time before I was born, I was able to clearly get an accurate picture of how Blacks were viewed and separated among themselves because of their skin tone, hair texture, and facial features. This premise sets the theme and lays out the background with a twist of metaphysical and new age thought mixed in. The novel is also a cliffhanger. The ending is set up perfectly for readers who want to know more about how these characters move on with their lives after the big showdown.
Trustpilot
Copyright © 2022 Thriftbooks.com Terms of Use | Privacy Policy | Do Not Sell My Personal Information | Cookie Preferences | Accessibility Statement
ThriftBooks® and the ThriftBooks® logo are registered trademarks of Thrift Books Global, LLC