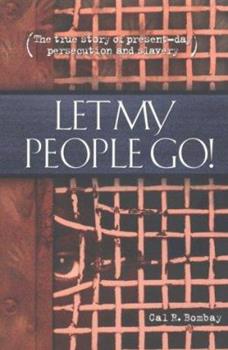 In the war-ravaged African nation of Sudan, slavery is a way of life. Islamic fundamentalists in the north capture women and children-many of them Christian-in the south and sell them to other northern Muslim as servants and concubines. There they live on table scraps and are forced to convert to Islam. Their stories are devastating, yet their capacity for hope is an inspiration to the world. Let My People Go is the gripping, heartrending, sometimes...

Published by Thriftbooks.com User , 17 years ago
This is the story of the 1998 odyssey of the author into Sudan, the modern slave state in north Africa, to redeem slaves stolen from their homes in southern Sudan in the unrelenting process of Islamization and Arabization of the Black Christian South. Cal Bombay traveled with Christian Solidarity International chief executive John Eibner and president Baroness Caroline Cox, who is also a deputy speaker in Britain's House of Lords. Bombay describes in simple terms the rogue regime of Ahmed el Beshir, who had violently overthrown the previous government in 1989. Government forces, armed with helicopter gunships, send janjaweed jihadists into the south to capture and behead the men, while enslaving women and children. The only resistance comes from southern Sudan's splintered and sometimes corrupt Sudan People's Liberation Army. He also discusses the process of redemption in which he was involved, whereby slaves were purchased from their Arab masters and set free in their Dinka villages. The latter, however, are the constant targets of genocidal raids and slave-taking. As we see today in Darfur, the process of Islamization and Arabization continues apace. Cox, Eibner, Bombay, Charles Jacobs of the American Anti-Slavery Group and people like them are the only ones doing anything about it. --Alyssa A. Lappen

Published by Thriftbooks.com User , 21 years ago
This book was recommended to me by a therapist. When I read it, I was amazed at all of the slavery that was going on in Sudan. It was a moving book, and very detailed on the hard ships being forced onto fellow human beings just because of their religion. It makes me want to get involved!

Whats REALLY Going on between Khartoum and Bagdad?

Published by Thriftbooks.com User , 24 years ago
A lucid account which unravels the complexity of Africa's difficulties. This book is far more than another bit of mounting evidence of atrocities against prosperous Black Africans recently documented by the UN. This book simplifies the daunting complexity of the Sudanese Civil War, and brings the reader a veteran african missionary's love for both Arab and Black African People Groups. The peacemaking missions between Moderate Arab muslims and Black Christians and animists are present paradigms for people of all races.

Published by Thriftbooks.com User , 24 years ago
Two years later, following the November 1996 account of Gregory Cane and Gilbert Lewthwaite of the Baltimore Sun, another gripping account of the reality of a Modern Black African Slave Trade in Northern Africa. Continued Arabization and Islamization of the Black Christian South; administered by the Arab Muslim North's helicopter gunships, and consummated by immaculately White Robed Muslim slave traders' scavenging the Black African Christian survivors. This is an account of an attempt by a small international human rights agency, at the desparate emancipation of a few of the many hundreds of thousands of formerly prosperous Black Africans from the wealth of Southern Sudan who have been subjected to the ultimate horror: a modern rebirth of the Black African Slave trade. In raids shielded from International Observation by Khartoum's designated "restricted areas", Black African Christian Women and their Children are led from the prosperity of their once beautiful, well developed towns, reduced by helicopter and horseback raids to rubble. They are sent, half clad (if at all) in rags, on slave trains to the Arab Muslim North, where they face further horrors. Most are sold as slaves to Arabs. Some are simply given as wives. Adolescent Black Women are the most vulnerable, facing forced sexual mutilation. Forced to renounce Christianity and accept Islam, their culture and race are erased as they accept Arabization through mandatory mutilation, education, and sometimes marraige. Some choose death.The author is no stranger to Africa, having served there 17 years in Kenya and Uganda, and later in Ethiopia. His exposure to the experience of G.C. and G.L. of the Baltimore Sun buying a young black boy out of slavery, writing his story in the Baltimore Sun in late November 1996, was his first shocking revelation of the renewal of a modern Black Slave Trade in Northern Africa. Though the author's words may occasionally seem hastily written, this is soon over shadowed by refreshing and fairly frequent prose which one would be hard pressed to improve: masterful prose so rich that this review ought justifiably to have been composed entirely of quotes. This was a real treat; not to be unexpected from a man who is an active commentator. Cal Bombay is also an active missionary, and so neither should it be a surprise that his love and affinity for Black African People are irresistibly knitted to the reader. The reader is carried not so much to the land of Sudan, as given the heart of the people. One views this atrocity from the ground, shoulder to shoulder with Black People as horse men and helicopters overtake not victims, but true friends of the author's, with their neighbors, and families. The reader is spared a sense of overbearing identification with the actual horror of the atrocities, though Mr. Bombay's warmth for the people is infectious. The book includes steps that the reader can take to follow up o
Trustpilot
Copyright © 2022 Thriftbooks.com Terms of Use | Privacy Policy | Do Not Sell My Personal Information | Cookie Preferences | Accessibility Statement
ThriftBooks® and the ThriftBooks® logo are registered trademarks of Thrift Books Global, LLC