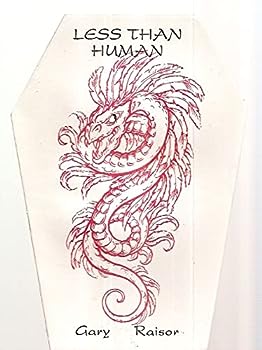 Signed Limited Edition. Signed by Joe Lansdale, Artist Guy Aitchison and author Gary Raisor. --Nominated for Best First Novel by the Horror Writer's Association! The Greyhound pulled into Carruthers,... This description may be from another edition of this product.

Published by Thriftbooks.com User , 14 years ago
Gary Raisor, Less than Human (Overlook Connection Press, 1993) You can never be quite sure what you're getting with small press horror, especially in that area between the eighties horror boom and the revival that started around 2002, when the big companies were snatching up everything that even remotely smelled like horror. In between, some really interesting stuff fell through the cracks. Less than Human, which originally found its home with drugstore-magazine-rack publisher Diamond in 1992, then was picked up by Overlook Connection in 1993, definitely identifies as interesting. Earl Jacobs and Steven Adler are vampires, of a sort. Not a sort you normally hear about (Less than Human owes a great deal more to Brian Lumley's Necroscope novels than it does to any more conventional vampire tale), but close enough for government work. They're also pool sharks, and they make their living going from town to town hustling in the American southwest. Until, that is, Steven's cue stick, which is very important to him, gets stolen. Thus begins a trail of blood that puts Adler on a collision course with John Warrick, the best pool hustler in the Southwest, and a psychic to boot. There are rules for books like this. Raisor basically ignores every last one of them. Joe Lansdale says in his intro that Steven and Earl "failed to read the book on how vampires behave"; so Raisor on the way horror writers behave. He's more interested in the backstory of how Steven and Earl came to be what they are than he is in the tale that's happening in the present, and as such, a great deal of this book is presented in flashback. To me, that's what separates this from the pack; Raisor is interested in making his bad guys as well-drawn and interesting as his good guys. There's also a sense that, unlike most horror writers operating today (hell, most writers of any stripe operating today), Raisor is willing to give the reader the benefit of the doubt; you'll have to pay attention to make sure you catch some of the details, but Raisor assumes you've caught them, and so avoids repeating himself. It's kind of pathetic when that's a sign of intelligence in a modern novel, but there you go. And Less than Human is, certainly, an intelligent novel. Overlook Connection came out with another edition of the book in 2000, but it hasn't been seen since. Let's hope Leisure, who have been sporadically releasing part of OCP's backlist, bring this one back into the daylight in a hurry; if you missed it the first time round, the publishing industry owes you a second chance. *** ½

Published by Thriftbooks.com User , 17 years ago
I read this book a couple of years ago. I really enjoyed it. I thought Raisor's portrayel of vampires as rednecks and white trash was unique and insightful. I've never been a pool player, but Raisor's descriptions of the vampires playing pool was enlightening. It's been a while since Raisor has been published and I'm looking for more of his books.

Eight Ball in the Corner Pocket

Published by Thriftbooks.com User , 17 years ago
It's been several years since I read this novel. I was deep in the thrall of the "splatter punks" who were the outlaw stars of the horror market (Ray Garton, David Schow, Joe R. Lansdale, etc.). I'd heard about this book, picked it up in paperback and later in it's hardcover edition (at the World Horror Con in Atlanta where I met Gary, but opted not to play pool with him). If your taste in vampires runs along the lines of Ann Rice variety, you'll probably find Steve and Earl, the pool-shark bloodsuckers of Raisor's novel a little on the unpolished side. But if your taste runs more in the vein of Joe R. Lansdale and the movie "Near Dark," you'll love this book. They just don't write 'em like this anymore. And that's a shame.

Thank you! (a few years late)

Published by Thriftbooks.com User , 22 years ago
I was barely 13 when I walked into my local Walden Books store (1992)., To my surprise their was an author here today autographing his book.. I didn't see anybody flooding his desk. There wasn't any press around. So I decided the book may actually be good! I walked up to the table without a penny to my name and tried to strike up a conversation. Much to my surprise the chrismatic gentleman was more then eager to chat. He began telling me about his book (of course). A never before published Vampire story. I had been interested in the suject for quite a while now, so he had me hooked., By the end of our conversation I desperatly wanted a to buy a copy but had to decline his offer, (I had already spent my money on an old Metallica CD).. I was about to leave when he stoped me and pulled a book from the shelve next to him. (My eye's widened just a bit) He asked my name and quickly scrawled out an autograph "Gary Raisor, For Eric. Let it bleed man.".,.. He produced a five dollar bill from his billfold and laid it ontop of the book,. Without a word he pointed to the checkout..... I have read the book several times since then. It is highly recomended!.. And Gary, if your out there. This is the Thanx I never had a chance to give...
Copyright © 2022 Thriftbooks.com Terms of Use | Privacy Policy | Do Not Sell My Personal Information | Accessibility Statement
ThriftBooks® and the ThriftBooks® logo are registered trademarks of Thrift Books Global, LLC