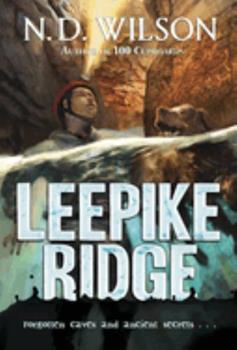 Before he wrote the bestselling 100 Cupboards trilogy and Ashtown Burials series , N. D. Wilson delighted readers with his first unforgettable action-adventure story of survival. . . . Thomas Hammond has always lived next to Leepike Ridge, but he never imagined he might end up lost beneath it The night Tom's schoolteacher comes to dinner and asks Tom's mother to marry him, Tom slips out of the house and escapes down a nearby stream on a floating slab...

"I too have been in the underworld, as was Odysseus, and I will often be there again."

Published by Thriftbooks.com User , 14 years ago
I am a traitor to my sex. I must be. All evidence clearly points in that direction. If 2007 is remembered as anything, for me it will be the year of Boy Books That I Adored While My Female Friends Slowly Shook Their Heads. First I fell head-over-heels gaga for Diary of a Wimpy Kid. Girls didn't always get the jokes. Then Atherton #1: The House of Power struck me as particularly fun. Blank stares from my female co-workers. Now I've read "Leepike Ridge" and if I am not physically shoving this book down your throat it is only because I have faith that this THIS book must surely be the exciting boy-centered tale that's going to win over mutual genders. It's got archaeology... and sheer death-defying, nail-biting survival! There's a practical tale of a boy finding a new father figure... and evil villains who will kill any man foolish enough to stand between them and TREASURE! Add in the fact that the writing itself is remarkably good (I used an unprecedented six colored tabs on cool sentences in the first chapter alone), the plot riveting, and the book itself a kind of Hatchet meets Holes and you've got yourself one heckuva debut novel, my friend. Boys, girls, small genderless rocks, EVERYONE should love and appreciate this book. And if I hear anyone so much as yawn in its direction, heads are gonna roll. Things could be better. Two years ago Thomas Hammond's father died in a plane crash and since that time the boy and his mother have lived quite simply in their weirdo home on top of a rock. Now Elizabeth, Tom's mom, is looking like she might marry the dweeby schoolteacher, Jeffrey, who's been courting her and her son is not pleased with the situation. In a fit of pique Tom finds a bit of styrofoam packing material and proceeds to lazily ride it down the local stream. Then he falls asleep and before he knows it the foam is sucked into a series of underground caverns with Tom just barely clinging to his life. And then, THEN he finds himself stuck in a world where there is no escape, no light, no food, and no comfort. As Tom finds two unlikely allies in his new prison, Elizabeth remains certain that her boy is alive and finds herself facing a crew of men intent upon locating the treasure they're so very certain lies wherever Tom might be. Okay, so I don't think I can get away with discussing this book with you without bringing up a cool spoiler or two once in a while. If you haven't read this title yet, here's my summary in brief. Book good. Read book. Love book. Persuade friends and family to read book. Got it? Cool. On to spoilerville. Let's begin by talking writing. Wilson's slick, you know. The kind of author who can get away with introducing his hero's age by writing something like, "Tom had traveled around the sun eleven times when the delivery truck brought his mother's newest fridge..." That takes guts. Anyone can write, "Tome was eleven" but "Tom had traveled around the sun eleven times"??? Here then is a

Published by Thriftbooks.com User , 15 years ago
Eleven-year-old Thomas Hammond is having a rough time. His dad died three years ago, leaving him and his mom alone in their house perched on top of the rock. They scrape by, surviving together, yet his mother begins to feel that Tom needs a father figure. In steps Mr. Jeffrey Veatch. Tom doesn't like him and his mom doesn't seem to either, but he appears to mean well. Then one day, Mr. Veatch proposes marriage. Tom can't sleep that night, knowing his mom is contemplating Mr. Veatch's proposal and dreading the outcome. So he decides to sneak out his window and go down to the river where he likes to explore. He often finds solace amongst the weeping willows and the wildlife living there. On this night he also finds the huge chunk of packing foam that had arrived that day with the new refrigerator. The wind had blown it off the porch. Tom decides to hop aboard and float downstream on it like a raft. At first, the trip is awesome, and Tom floats pleasantly along watching the stars and listening to the cicadas. And then he falls asleep. Tom awakes to find himself caught up in a swift current. Before he can swim for shore, the water throws him up against the rocky mountain and then sucks him into a complex system of underground caves. He fights for air as the river pulls him under and throws him against the rocks. Completely exhausted and battered from head to toe, Tom finally comes to rest on a gravel beach inside the cave. In total darkness, he pulls himself up onto the beach and finds that he's not alone --- he shares the beach with a dead man! So begins Tom's exciting quest to survive and find a way out of the caves. Along the way he discovers a few other captives of the mountain, including a helpful dog and a veteran survivor, a treasure hunter stuck inside for three long years. But Tom is determined to get back home, and the three of them set out on the adventure of a lifetime. LEEPIKE RIDGE is N. D. Wilson's first book for kids, and he has created an amazing adventure. Wilson has a unique and refreshing writing style that brings his story to life ("After a few mouthfuls of the moon-flavored air..."). And his colorful characters and dry humor add real spice to this action-packed page-turner. Wilson's brilliant story will remind us all to appreciate the real treasures in life, like sunrises and stars, and friends and family. --- Reviewed by Chris Shanley-Dillman

Published by Thriftbooks.com User , 15 years ago
Tonight, my son (8), daughter (6), and I finished this wonderful book. We all enjoyed the mix of adventure, humor, and suspense. Mr. Wilson has a good ear for words, and uses them effectively to tell a story that sticks with you. By the end, you feel attached to the main characters. Tom, Reg, and Argus will be members of our family's hall of heroes for many years to come. We look forward to reading future books by Mr. Wilson.

Published by Thriftbooks.com User , 15 years ago
Leepike Ridge was a very fun read. N.D. Wilson's style of writing is very personable. He makes the most mudane things seem extremely exciting. His writing clearly reflects the mindset of the main character, Tom. Tom thinks and acts like an eleven-year-old boy would, not as some adult thinking through him. The story was exciting; I turned pages quite quickly at the end. I also enjoyed picking up on classical allusions. They were not in-your-face allusuions, but just tucked in, allowing you to enjoy them if you understood, but not inhibiting you if you didn't. I thoroughly enjoyed Leepike Ridge and look forward to more books by N.D. Wilson.

Published by Thriftbooks.com User , 15 years ago
I read Leepike Ridge in two sittings and I was hesitant to stop reading it during that first sitting. I was fairly certain going into it that I would probably enjoy it to some degree, but I was pleasantly surprised by just how much I ended up enjoying it. As a recent college grad I can testify that this book can be enjoyed by people of all ages and I honestly hope it will be. I'd say that this would make a good Christmas present, but by that time, N.D. Wilson's next book will be right around the corner. I suggest adding this to your summer reading and pre-ordering his next title as soon as you can.
Trustpilot
Copyright © 2022 Thriftbooks.com Terms of Use | Privacy Policy | Do Not Sell My Personal Information | Accessibility Statement
ThriftBooks® and the ThriftBooks® logo are registered trademarks of Thrift Books Global, LLC