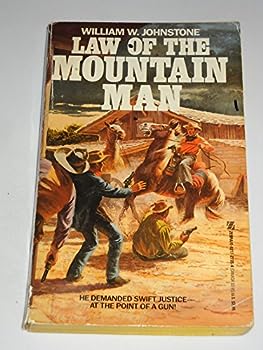 Law of the Mountain Man

(Book #6 in the The Last Mountain Man Series)

This description may be from another edition of this product. The Greatest Western Writer Of The 21st Century When The Bullets Start To Fly Smoke Jensen sat in a cave and boiled the last of his coffee. He figured he was in Idaho-somewhere south of Montpelier-but...

Published by Thriftbooks.com User , 2 years ago
They sent my son to a different jail and the boots went to his old jail so I have to re-order them

Old-fashioned entertainment but like Potato Chips, ya can't have just one!

Published by Thriftbooks.com User , 12 years ago
This particular series of books featuring Smoke Jensen have fiercly dedicated fans. I"m only a casual reader but I buy these books as gifts for a family friend who is serving a prison sentence. I am rating these based on his reviews. He tells me these are the perfect escape books for people who are either incarcerated or perhaps disabled or elderly. The action is fast-paced and the descriptions of the Western frontier are authentically detailed. He appreciates that WWJ often refers to historic events of interest and will try and tie the story in with those happenings. Reading this series and the Preacher Series by the same author has motivated him to ask for non-fiction books about the Frontier and the Old West. There are currently 34 books in this series and the first 28 or so were written totally by WWJ. The later books were collaborations with his niece Jo Johnstone. WWJ himself passed away a few years ago in 2004 or 2006 depending on your source, and Jo has taken over most of the continuing series. However, readers didn't even realize the man had died until his publisher 'fessed up so I would assume that the current writer is keeping with the same tried and true formula that fans expect when they buy one of these books. If you know somebody who could use a little escape to this time period, you really can't go wrong with these books. The only thing I would say is to be aware that his politics are on the conservative side. This doesn't figure much in the westerns but in his Post-apocalypse series ASHES, it's front and center. Many fans of Westerns have never gotten around to that series but I'm just puttin' it out there for you so you know.

Published by Thriftbooks.com User , 21 years ago
I was in awe reading about the adventures of Smoke Jensen and Preacher The action was fast and brutal, a real page-turner. You can almost smell the gunsmoke! I'm glad I finally discovered Mr. Johnstone.

The Beginning of an Outstanding Series

Published by Thriftbooks.com User , 23 years ago
"The Last Mountain Man" is the beginning of the Smoke Jensen story. Smoke is a raw naive kid, who learns fast, and won't take any crap from any outlaw murdering thief. If you like the Western genre you'll LOVE William W. Johnstone's "Mountain Man" series. Smoke Jensen is genuine.

One of the BEST he has ever written

Published by Thriftbooks.com User , 23 years ago
I read this book when it was first out in paper back, since then, I think I've read everything Johnstone has written. A true storyteller.

I LOVE THIS BOOK

Published by Thriftbooks.com User , 23 years ago
I LOVE THIS BOOK. IT IS HIS BEST ONE. I AM GLAD THAT I GOT ONE OF THE FIRST COPIES BEFORE THEY CHANGED COVERS.
Copyright © 2020 Thriftbooks.com Terms of Use | Privacy Policy | Do Not Sell My Personal Information | Accessibility Statement
ThriftBooks® and the ThriftBooks® logo are registered trademarks of Thrift Books Global, LLC