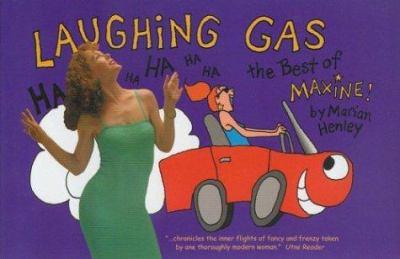 Laughing Gas: The Best of Maxine

Laughing Gas is a collection of Marian Henley's Maxine!, a weekly comic strip in syndication since 1981. Maxine is a ponytailed pundit who, as one editor observed, always has her mouth open. Maxine offers an opinion on everything that matters most: love, religion, politics, philosophy, and of course, bad hair.

"Garfield" was also a US President

Published by Thriftbooks.com User , 15 years ago
I've loved Marian Henley's "Maxine" comic strip for over 20 years. Her expressiveness with an economy of lines is as astounding as her insight into the human condition, and far too expansive to put on a mug or calendar. The other Maxine, which I had never heard of, was created 5 years after Ms Henley's. That Ms Henley could "rip-off" the subsequent creation must indicate that she is a Mistress of time as well as space. Unfavorably rating a book because it was grouped with a book with a similar subject makes as much sense as voting for a fat tabby for President and hoping for the best. On second thought... :--)

A true slice of reality in a comic strip world...

Published by Thriftbooks.com User , 19 years ago
I've enjoyed the Maxine comic strip for years. In fact it's about the only one I read. And Maxine is so much more than just a comic strip. It's real, it's funny, it's insightful, it's human. It's reality described through comic strip characters, from a woman's point of view of course. So what a pleasant surprise to find the best of Maxine all bound up for me to enjoy while laughing myself into a frenzy. Ah, good times...

Published by Thriftbooks.com User , 19 years ago
In my opinion, MARIAN HENLEY is an extraordinarily gifted writer and artist. It's quite rare to find a comic strip in which the writing AND the drawing are equally brilliant-- but MAXINE is a prime example.I can't think of another comic strip author who can move so freely and naturally between fantasy, observational humor, social and political satire, stark symbolism and deep personal insight. And, as beautifully crafted as her strips are, they all have that special quality of truly great art-- they seem as effortless as a daydream.I highly recommend this book to all men who'd like to understand women, all women who'd like to understand men, and anyone under the delusion that he understands housecats.Ed NewmannDirector of AnimationCalabash Animation, Inc.

Published by Thriftbooks.com User , 19 years ago
Henley holds up a whimsical magic mirror to society and the world in which we live. Intelligent, insightful, thoughtful, revealing and all with a wry sense of humor. If one of Maxine's life observations strikes a wrong note its worth taking a long look at yourself, as it has probably hit a little to close for comfort. This ponytailed princess proves laughing gas is the fuel of life.
Trustpilot
Copyright © 2022 Thriftbooks.com Terms of Use | Privacy Policy | Do Not Sell or Share My Personal Information | Accessibility Statement
ThriftBooks® and the ThriftBooks® logo are registered trademarks of Thrift Books Global, LLC