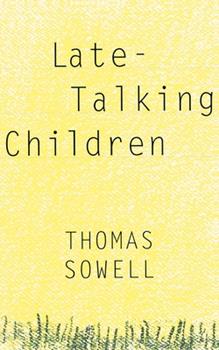 The painful and baffling mystery as to why some obviously bright children do not begin talking until long after the normal time is explored in this book through personal experiences and the findings of scientific research. The author's own experiences as the father of such a child led to the formation of a goup of more than fifty sets of parents of similar children. The anguish and frustration of these parents as they try to cope with children who...

it made me feel a whole lot better....

Published by Thriftbooks.com User , 20 years ago
It made me feel a whole lot better that there are other parents out there experiencing the same problems and feelings that my husband and I are having. We are the parents of a bright three-year-old, who is speaking on a 1 1/2 year old level. He has a vocabulary of about thirty words right now, and he uses them correctly and in context. However, he is far behind his age group. My son and our families had many similarities to the children in Mr. Sowell's books, "Late-Talking Children" and "The Einstein Syndrome". However, I don't agree 100% with everything Mr. Sowell wrote, and I would never use one man's opinion as gospel. Use this book as advice to be listened to and judged by an informed mind and a parent's heart. Research, read, talk to professionals, but also listen to your gut where it concerns your child. Mr. Sowell makes a good argument for that.

Published by Thriftbooks.com User , 21 years ago
Thomas Sowell is one of my favorite conservative authors. He is also the father of a late talking child who was misdiagnosed with autism or other problems, when in fact there was really nothing wrong with him (other than he talked late). After writing a few columns about his son, he started to get contacted by many other people with the same situation. These contacts turned in an informal group - the members of which he writes about here. There is really not too much in this book for people who do not have family that is late-talking, but for us it was very enlightening (our son Max was late-talking). The basic conclusion of this book is that there is some unnamed, unstudied disorder which seems to make children who are very very left brained talk late. These same kids seem to excel at math, logic and computers. It is possible that the late talking is just a function of the analytical part of the brain talking all the new cells for a while and "robbing" the speech center. This is not the case will all children who talk late, just thost who are perfectly normal in every other way (can understand and perform other functions normally or at an accelerated rate).

We too had an "autistic" child

Published by Thriftbooks.com User , 22 years ago
If it were possible, we would give this book ten stars. We read this book after seeing an excerpt from Reader's Digest. At that time, our five year old had been in pre-school for two years because of his late talking and delay in social interaction. Just before he was to go to kindergarten, we were bowled over with a "determination" of autism by the school district. We (pediatric nurse and lawyer) knew this was incorrect, and pointed to this book as proof, as our son matched many of the patterns in the book. With this as a guideline, we contacted the current crusader for late-talkers, Dr. Camarata from Nashville (Vanderbilt Univ.), who works with Dr. Sowell. A year later, our son has made progress of up to three years in some categories due to the proper interventions and no longer shows any hint of autistic tendencies, nor is he on the autism "spectrum" (the new example of fitting square pegs in round holes). His social interaction is now age appropriate. This book, contrary to some reviews, does NOT give false hope, but encourages parents whose child does not fit a majority of "autism" characteristics to investigate further. Thank God for Drs. Sowell and Camarata -- keep up the good work!

Published by Thriftbooks.com User , 23 years ago
The book Late Talking Children is an invaluable resource for many parents. The author's extensive research, and experience with his own child, are just a couple of reasons readers of this book can see his caring and dedication to the subject of late talkers. I'd never seen a book dedicated solely to this mystery of the late talking population. Many parents I have spoken with since I'd read this book felt as if they were "all alone" before they found this book, and now can see there are many others that are going through the same things that they are. Dr. Sowell also makes it very clear that although not all late talkers are autistic, that some definately are and encourages every parent to seek many REPUTABLE professionals to get an accurate diagnosis. There are many different approaches a parent can take to help their child, and it is so important not to take the inappropriate path...and I believe this level-headed no nonsense book could help any parent of a late talker find their correct path.
Trustpilot
Copyright © 2022 Thriftbooks.com Terms of Use | Privacy Policy | Do Not Sell My Personal Information | Cookie Preferences | Accessibility Statement
ThriftBooks® and the ThriftBooks® logo are registered trademarks of Thrift Books Global, LLC