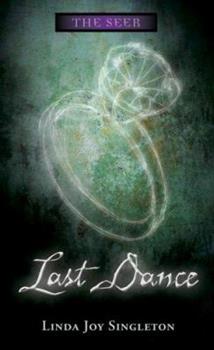 Sabine's grandmother has a fatal illness and the only cure lies within a lost remedy book. Sabine visits a distant relative for information on the book, but is sidetracked by a ghost. Sabine must use her psychic skills to solve the mystery surrounding the ghost's untimely demise.

Published by Thriftbooks.com User , 14 years ago
In Linda Joy Singleton's LAST DANCE, Sabine seeks the herbal potion, written in an old family book, that will cure her ill grandmother. On her quest, she meets a ghost, who has been haunting her dreams, and the mystery deepens. Will Sabine find the book in time to save her grandmother? Or will the ghost have the final say? I highly recommend this series for ghost lovers, mystery lovers, and everyone who loves a great story.

Published by Thriftbooks.com User , 15 years ago
That's good: Just finished Linda Joy Singleton's The Last Dance (second in her Seer Series) She's created a living breathing characters I care about, and am completely intrigued by. Even the bad guy. The fact that it has a character with psychic powers, who is starting over in a new school after her mother sends her away, makes the story that much better because of the emotion it adds to the story. You want Sabine to fit in just as bad as she does. The funny thing is, she may end up fitting in because she accepts who and what she is rather than pretending to be something she's not. That I don't know for sure because there are more books in the series I need to read, which leads me to... That's bad: Why did I not buy three and four when I could? Now, I must wait. Not for long though, so I guess that's good afterall.

Published by Thriftbooks.com User , 15 years ago
This book is a very good book... One of the best books that I ever read. I recommend this book to everyone. Sabrina seems like a very nice person who likes to help out a friend. That cares about other people. She has this gift that help out people. I give this book five stars it's a book that kept me on the edge of my chair waiting to see what happens next. Very entertaining to read, Give it two thumbs up! The author wanted to show you a good time and entertain you. Would read it again! :)

Published by Thriftbooks.com User , 15 years ago
The Seer continues to draw me in deeper. This book shows the reader more of Sabine's thoughts & family, and reveals some surprising details of her hidden past. Her friendship with Dominic heats up as they take a trip on a quest to discover the source & meaning of what she has SEEN. A very dangerous & thrilling ending...I won't give it away. All of Linda Joy Singleton's books have the perfect blend of energy, excitement, mystery and suspense. Just the elements needed to keep me up all night reading from cover to cover!I am ordering Witch's Ball and am really looking forward to more excitement & secrets in the upcoming book: Sword Play.

Published by Thriftbooks.com User , 16 years ago
Sabine Rose is still getting used to her psychic powers. She has managed to hide her powers from her boyfriend, Josh, and her closest friends. She hopes they will never find out either. She would hate to be labeled as a freak. Sabine is living with her grandmother, Nona, and a boy named Dominic. Dominic has a way with animals. He is able to communicate with them. Nona has sort of adopted Dominic and is helping him understand his abilities. When Nona becomes ill, Sabine is desperate to help her. Family history says that others have been plagued with the same thing Nona is going through. The cure, an herbal potion, has been written down within an old book and has been past down from mother to daughter. However, the death of Nona's great-great-grandmother (Agnes) caused it to disappear. Agnes had four daughters but they ended up being separated. Each daughter kept a charm from Agnes. The charms would reveal the location of the hidden book. Nona gave her charm to Sabine. With help, Sabine located one of Agnes's decedents. Thorn, Sabine's Goth friend, drives Sabine out to Pine Peaks to talk to this long lost relative. While they are there, they will stay with Thorn's Aunt Deb and Uncle Charles. Sabine wants nothing more than to concentrate on helping Nona, but a ghost has been entering Sabine's dreams seeking help. It just so happens that the ghost, Chloe, died in Pine Peaks about fifty years ago. In fact, the entire town celebrates Chloe's death every October! People from across the nation drive all the way to Pine Peaks, California, in hopes of seeing Chloe's ghost on stormy nights. The town is packed with tourists and media. Chloe is one determined ghost and guides Sabine to learn the truth of why she died, who was involved, and how to set her free. But someone in town does not want the truth to be known. Someone who would kill to keep the world from learning what happened all those years ago. ***** As usual, Linda Joy Singleton seems to know exactly how to send chills down the spine of her reader! The characters are unusual and I found these teens with special abilities to be engrossing. You will have a hard time putting this book down. Expect to lose a few hours of sleep as the story gets more intense with each turn of the pages. Excellent! ***** Reviewed by Detra Fitch of Huntress Reviews.
Copyright © 2020 Thriftbooks.com Terms of Use | Privacy Policy | Do Not Sell My Personal Information | Accessibility Statement
ThriftBooks® and the ThriftBooks® logo are registered trademarks of Thrift Books Global, LLC