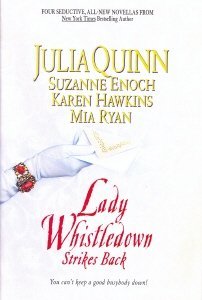 (Book #2 in the Lady Whistledown Series)

Following the New York Times bestseller, The Further Observations of Lady Whistledown, a second glittering anthology starring the elusive Regency-era gossip columnist popularized in # 1 New York Times... This description may be from another edition of this product.

Better than the first!

Published by Thriftbooks.com User , 17 years ago
I have waited (very impatiently) for this new edition of the Lady Whistledown series. I enjoyed the first and was not disappointed by the second. Julia Quinn, Suzanne Enoch and Karen Hawkins deliver in a big way. Their stories were fun, romantic and wonderfully woven together. And please, if you don't get the tingles over this exchange..."I admit I have felt the effect of your mouth, my lord," she said in a low voice.This looking and not touching was going to kill him. "You haven't begun to feel the effect of my mouth, Charlotte, " he murmured.(page 228)WOW! Be still my beating heart!The only low point in this fabulous collection was the story by Mia Ryan. I was very disappointed by the silly, downright obnoxious character of Miss Martin. What happened to Mia Ryan? I really enjoyed the story she wrote in the original Lady Whistledown compilation, but since, her work has seemed forced and painful. Very sad.In all, you must read this book for the wonderful stories from Quinn, Enoch and Hawkins. This book is going on my keeper shelf!

Superior Effort in Blending into a Marvelous Anthlogy

Published by Thriftbooks.com User , 17 years ago
FIRST KISS, THE - Julia Quinn - Peter Thompson is home from Waterloo, one of the fortunate to survive and wants nothing more than to settle down with a biddable wife on a small farm somewhere. His prospects are not that good, being the second son of a minor baron, he is in London to find a suitable bride with a relatively good dowry. As it happens he is at the most sought after dinner party put on by Lady Greely, he comes face to face with Lady Mathilde `Tilly' Howard, sister of his best friend Harry who didn't survive. He knew by her close resemblance to Harry who she was without being introduced, but more than that he was attracted by her sincere and sweet manner. Knowing that she was daughter of an Earl and an heiress to boot he knew he'd have to look elsewhere or be labeled a fortune hunter. Tilly attracted as she was by this handsome, intelligent and honorable hunk thought to change his mind! Totally charming, very cute and funny - 5* The LAST TEMPTATION - Mia Ryan --- Isabella `Bella' Martin has been Lady Greely's companion and party planner for the last ten years and has been quite adept at hiding in the shadows. A spinster fast approaching her 30th birthday and never been kissed which she vows to change before that fateful birthday. Lord Anthony Roxbury, 37 and heir to the Earldom has no intention to marry in spite of the weekly sessions with his father continually stressing the reasons why it is his duty to marry and procreate. Having too much fun it is the last thing on his mind until he mistakes Bella for one of his assignations and she not only gets a kiss but a relatively nice grope before she shockingly rears back and almost breaks his nose. Through the blood and the apologies, Anthony discovers that this very self deprecating spinster is a breath of fresh air and decides he must see more (and more) of her. Wonderfully romantic - 5* The BEST OF BOTH WORLDS - Suzanne Enoch --- Charlotte Birling is allowed no chance at all of ever being mentioned in Lady Whistledown's column, ever since she was seven and her cousin had married in haste and then been deserted by Lord Easterly. But a girl could dream and the dream rode by her house every morning on his way to Gentlemen Jacksons. Her dream was the very handsome Earl Xavier Matson who since coming to town was making a name for himself with his womanizing exploits. When Xavier chances to overhear Charlotte at a function standing up against Lady Greely for accusing someone of stealing her bracelet without so much as a shred of evidence, Xavier is intrigued. No. she might have been plaine and she certainly wasn't the type he'd been pursuing in a search for a wife but there was something about her that did kindle his interest - an interest that Lord and Lady Birling were adamant of nipping in the bud. - But alas, we all know that love will win out! - Totally awesome for such a short novella! 5* The ONLY ONE FOR ME - Karen Hawkins --- Sophia (cousin of Charlotte

Published by Thriftbooks.com User , 17 years ago
Lady Whistledown truly was a delight. I will not go into the details of each story. They have been described elsewhere. Suffice it to say, they all were a pleasure to read. After not finding many keepers lately, this was one. It was not a surprise. I am a fan of all the authors, with the exception of Mia Ryan. I loved her story in the 1st Lady W., but I didn't like her follow-up book. But, the other three authors are among my favorites and they didn't disappoint here. The characters were all likable, and I felt believable. So, if one was a giggler, I feel she can be forgiven. The stories are entertaining and worth your time.

Published by Thriftbooks.com User , 17 years ago
This collection was wonderful, even (dare I say) more entertaining than the first. Quinn's Whistledown quips are hysterical, and the three authors working with her meld together perfectly. Though the characters overlap it is never disjointed, and waiting to see how they would work in all the meetings and near-misses becomes half the fun.Highly reccomended for anyone who's looking for a fun, light-hearted historical romance. Because in this book, you get four!

Sometimes the sequel is better than the first!

Published by Thriftbooks.com User , 17 years ago
I really enjoyed the first LADY WHISTLEDOWN book and I was looking forward to the continued adventures in this new one. Because it's a sequel (a spinoff really) I didn't expect it to be as good. Well, I was wrong! All of the stories here are equally strong and balanced - a perfect combination of humor, romance, mystery, and fun. A winner on all counts!
Copyright © 2022 Thriftbooks.com Terms of Use | Privacy Policy | Do Not Sell My Personal Information | Accessibility Statement
ThriftBooks® and the ThriftBooks® logo are registered trademarks of Thrift Books Global, LLC