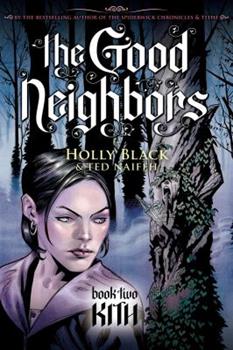 (Book #2 in the The Good Neighbors Series)

From the amazing imagination of bestselling author Holly Black, a mysterious and wonderful teen graphic novel masterpiece. Rue Silver's life is not what it appears to be. Her mother is a faerie, and has been taken back to the faerie realm. As Rue goes to bring her back, she must travel deep into an inhuman world. At the same time, the faerie realm is venturing into our world too, and taking its toll on those Rue loves. When her grandfather's plans...

Published by Thriftbooks.com User , 12 years ago
This is the second book in the Good Neighbors series of graphic novels written by Holly Black and illustrated by Ted Naifeh. It was a good follow-up to the first book, Kin. Last I heard this is going to be a three book series. In this book Rue goes in search of her fairy mother. When she finds her mother all is not what it seems to be. Rue's friends are becoming more and more endangered as fairy becomes a bigger part of their lives and Rue finds out that her grandfather has plans to pull the city into fairy and make it his own. The storyline in this graphic novel is good and moves quickly. There are a lot of things happening at once so sometimes it is a little hard to keep track of what is going on. Still it is an interesting storyline and, for the most part, the graphics represent the story well. My only complaint would be that at times it is hard to tell who is who based on the drawings; I wish this was clarified a little bit better. Overall it was okay. The plot is a bit too broken up for us to get really engaged with any of the characters, but I liked the story. I am eager to read the next book and see how things pan out for our heroine Rue.

Published by Thriftbooks.com User , 12 years ago
this is the second in the Good Neighbors series... dear lovers of Faerie tales, ... and it is wonderful. We continue with the story of Rue Silver, whose mother is faerie and whose grandfather has designs on taking back part of the human world. We want more, more, more of these. And Ted Naifeh's art is great. We also love his Courtney Crumrin, Vol. 1: Courtney Crumrin & The Night Things (Courtney Crumrin (Graphic Novels)) series. Thanks Holly and Ted for creating something so wonderful. kyela, the silver elves

Published by Thriftbooks.com User , 12 years ago
I have been anticipating this book for more than a year, since I read book one, Kin. Now to be honest, I am not a huge graphic novel reader. I can count on one hand how many I have read in the last decade, but this book I could not wait for and the next year, until book three comes out, is going to seem to last forever. Graphix is the graphic novel arm of Scholastic press, most famous for Jeff Smith's Bone. This book is the second in a trilogy from Holly Black, one of the authors of the Spiderwick Chronicles. The series called The Good Neighbors began with Kin last fall, and continues this year with Kith. This is an incredible graphic novel. The story that started strong and compelling in book one, becomes even better in this follow-up story. The characters are enticing and draw the readers in, and the artwork is incredible. This is the continuing story of Rue Silver. Rue thought she was a typical student - she had good friends, hung out, went to class and broke into abandoned buildings to climb and explore in them. But after finding out that her mother was really of the faery folk, she finds out that her grandfather Aubrey wants to take over the town. He wants to surround the whole area in a spell and separate it from the human world. Rue is torn in her loyalties - her family among the faeries or her friends and all the humans in the town. An epic battle is brewing between man and faery and Rue is stuck right in the middle. This story has a very dark edge. Rue and her friends are university students, struggling with issues of loyalty, fidelity, lust, and all the other emotions and decisions they need to make. Unfortunately they also all know about the faery world, and once you learn about something you cannot unlearn it. Her friends are drawn into this power struggle and she must decide what side she is on. Unfortunately the book ends with a cliffhanger, leaving the reader salivating and waiting for the next installment due in the fall of 2010. This is a book very well-done with an amazing storyline and fantastic artwork. (First Published in Imprint 2009-11-13 as 'From Spiderwick to Fantastic'.)

Masterfully Hooks the Reader In

Published by Thriftbooks.com User , 12 years ago
At this point, books about kids who have grown up feeling out of place and then become aware of their greater place in the supernatural world are almost a dime a dozen. Finding ones that stand out and take the genre into new and interesting territory is a distinct treat. Holly Black's The Good Neighbors series is one of them. The first book in the series, KIN, introduced us to Rue Silver, a sullen teen whose parents are undergoing what she thinks is a bitter yet standard divorce. Her father has apparently strayed from his wife, and her mother, very hurt by his actions, has left the home. In the midst of all her emotional turmoil, a young woman at the university at which Rue's father teaches is found dead. Rue's father becomes the main suspect. Even worse, Rue struggles with strange visions of faerie creatures, monsters, evil-looking beings spouting dread warnings, and other oddities. And then, just to make things far, far worse, Rue's grandfather Aubrey shows up. It turns out that Rue's mother, Nia, is a faerie herself. Her husband, Thaddeus, won the right to marry Nia when he passed a test enacted by Aubrey. Nia could remain in the human world along with Thaddeus as long as he remained faithful to her. But once that vow was broken, she would have to return, forever. Aubrey has more in mind, though. He wants Rue too. Book two, KITH, finds Rue trying to adapt to her new life, working with her core group of friends to thwart Aubrey's plans, and trying to rescue her mother from the faerie world. There's plenty of action, to be sure, but the real highlight is the eerie mood Black builds up throughout these first two books. Just as she demonstrated with her bestselling prose The Spiderwick Chronicles, Black is adept at writing intelligent books aimed at teens and keeping the suspense elevated without letting up. And for her comics work here, she has found the perfect partner for her delightfully creepy tale. The art by Ted Naifeh is a real standout. The main problem with The Good Neighbors is the long wait between books. With a story that builds to such a cliffhanger ending and so masterfully hooks the reader in, it's only natural to want more...and to want it quickly. --- Reviewed by John Hogan

Published by Thriftbooks.com User , 12 years ago
It's bad enough to know that your mom was a faery, and that she faked her own death. But for Rue Silver, this is only one of many problems that crop up in "Kith," the second volume of Holly Black's Good Neighbors trilogy -- there's also the slowly encroaching world of the fae, her ruthless grandfather, and her splintering gang of friends. This graphic novel suffers from a bit of "middle book syndrome," but its horrific undertones keep it interesting. Rue is understandably worried. Not only is her fey mom alive and somewhere else, but her boyfriend Dale has become strangely distant (and we soon see why), her little gang is splintering, and faery creatures are still appearing on behalf of her granddad Aubrey. Then Birch and Tam bring news of a bigger problem that Aubrey has created -- he's starting to cordon off the city, and intends to cast a spell that will make it unfindable to the human world. And one night she's drawn into a faery realm by the shadow of her mother, showing her the first glimpse of this strange and addictive world of dancing, magic and eerie heartlessness. But Rue hasn't forgotten her cruel grandfather's scheme, or the terrible things that are happening to her friends -- including one who has been transformed into a tree. And as the time of Aubrey's plan approaches, Rue finds that she may be If "Kin" was all about Rue discovering her half-fae nature, then "Kith" is all about Rue struggling with the two halves of herself -- the wild dark fey half, and the more rational human half which knows that what her grandfather is doing is horrible. Aside from that, Holly Black's focus is definitely more on the encroaching world of faeries than on Rue's human life -- her eerie mother, the world "under the hill" and haunted forests with nymph-infested pools. The tone also becomes far darker in this story: shadowy caverns, ghastly grinning monsters, Tam Lin's sorrowful backstory, a girl whose heart is full of vines and leaves, and Aubrey's plan for the human world. And Black's dialogue blends together the mundane teenspeak and the otherworldly voice of the faeries ("My lady, I see your shadow has found you. And something else has found you, betimes"). The only real problem that the plot is rather scattered in focus until the climax -- a common problem in "middle books." And Ted Naifeh's artwork suits the story as well -- pretty realistic faces and bodies, but with spiky fingers, shadowy forests, and creatures that are just a little inhuman (Nia's glinting empty eyes and wide smile). Rue is a likable heroine with a common fantasy problem: she's half fae and half human, and so obviously she's feeling a tug'o'war between the two worlds. On the one hand she obviously loves the beauty and magic of the fae world, but her human conscience can't condone what they're doing (and longs for her family to reunite). And she's struggling with problems afflicting her "kith" -- romantic cheating, faerie pendants, and a friend whose transformation lead
Copyright © 2022 Thriftbooks.com Terms of Use | Privacy Policy | Do Not Sell My Personal Information | Accessibility Statement
ThriftBooks® and the ThriftBooks® logo are registered trademarks of Thrift Books Global, LLC