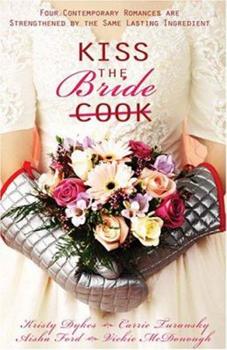 Four young women meet at a restaurant owner's conference-Angel from Florida, Monica from Missouri, Haley from Oklahoma, and Allison from New Jersey-and discover they share the same faiths, fears, and hopes, including a lack of a love story in their lives. They vow to keep in touch, pray for one another, and meet again at next year's conference. What happens in between is an absolute smorgasbord of changed lives, challenged faiths, new dedications...

4 Heartwarming Tales about Women in the Restaurant Business finding God and Love!

Published by Thriftbooks.com User , 12 years ago
There are 4 novellas in this one book. Each novella is around 80-90 pages and is centered around four different women. This is a contemporary Christian Inspiration novel, so be warned if you are not interested in reading about God, prayers, and people establishing a firmer relationship with God. But also know that this is not a preachy book that is heavy with sermons. It is four light, inspiring, romantic stories that can't help but make your heart warm and your stomach growl! In a way, this is an adult version of the "Sisterhood of the Traveling Pants," instead of the four women sharing a pair of jeans, they share a comical apron that says "Kiss the Cook." No, they don't believe the apron has magical powers that will produce Mr. Right, instead they trust and have faith in God to bring the right man into their lives at the right time. However, they do believe that wearing an apron that says "Kiss the Cook" can't hurt! Angel Food: (4 stars) Angel Morgan (the one who bought the apron) has just received an inheritance from a great-aunt and has bought a place to make her dream of opening a French restaurant a reality. The only problem is that the small town in which she lives does not need an upscale French restaurant. Cyril Jackson befriends this new business-owner and is thinking this may turn into a great relationship, but Angel seems to have her priorities backwards. Just Desserts: (4 stars) Monica's family is in the restaurant business, Gil's family is in the restaurant business, Monica and Gil used to date in high school and their families used to be in business together. Fast-forward 10 years, their families are rivals, own separate businesses, and Gil broke Monica's heart when he left for college. Now that their parents have retired they are trying to run their families separate business without ruining them. A Recipe for Romance (5 stars) Haley is a dedicated worker, she worked hard through out college and is now working hard to pay off college loans. Her brother asks her to correspond with a lonely soldier in Kuwait. Haley enjoys having a friend that she can share things with and when her parents leave her in charge of their cafe, her correspondent, Scott, is there to help work on the repairs. However, Scott has kept a secret from Haley that might destroy her trust in him and their relationship. Tea For Two: (5 stars) Allison is trying to make her Tea Shop a success and when someone from her past offers free advertising she wants to accept. The only problem is that the person who offered the free advertising is the same person who broke her heart 6 years ago. Tyler is trying to make ammends to Allison by doing free advertising for her business, but he also has an ulterior motive. I gave this book five stars because the last two stories were real captivating and inspiring, I enjoyed the characters, the recipes at the end of each novella, and the lessons of love and faith I learned while read this book. I highly recommend!

Published by Thriftbooks.com User , 15 years ago
"A Recipe for Romance" is one of four novellas in the book "Kiss the (Cook) Bride." An apron connects all four stories adding a fun twist. Our story starts when Haley Tannehill's brother asks her to email an old school buddy; Scott Jantzen. Haley and Scott exchange emails and a friendship forms. Meanwhile Haley is put in the awkward position of taking over, The Cowpoke Café, the family restaurant she grew up despising. When Scott returns home from the Middle East, Haley hires him to help her renovate the neon, cowboy boot blinking restaurant, into something a little more modern. As Haley spends more time with Scott, his witness and devotion to his heavenly father, makes Haley realizes she has more missing in her life then an updated restaurant. At the end of Ms. McDonough's book is a recipe for "Aunt Mildred's Icebox Cake". It made a wonderful addition to my Thanksgiving dinner and has a surprisingly nice tart and nutty flavor. And really, there is no better way to enjoy a good book then having a great dessert to go with it!

Published by Thriftbooks.com User , 15 years ago
Reviewed by Kelli Glesige for Reader Views (9/06) "Kiss the Bride" is a compilation of four contemporary romances written by four different authors, but all are intertwined. Four young women become fast friends at the National Restaurateurs' Convention in Dallas, Texas, when the hotel elevator gets stuck. Angel, Haley, Allison and Monica learn they have several things in common besides all attending the same convention and being in the restaurant business. All the young women are single and have high hopes of meeting Mr. Right in the not-too-distant future. In varying degrees, the young women trust God and know he has a plan for each of their lives. All the women vow to remain friends and to reunite at the next convention. Will any of them be able to share success stories of finding Mr. Right? "Angel Food" and the Epilogue is written by Kristy Dykes and tells the story of Angel Morgan and her struggle to find patrons at her new restaurant, the Rue de France in the small town of Nine Cloud, Florida. "Just Desserts" by Aisha Ford tells the story of Monica Ryan and her family-owned business in Missouri called The Pie Rack. A "Recipe for Romance" by Vickie McDonald finds Haley Tannehill in Tulsa, Oklahoma, as a hostess at her brother's restaurant called Tannehills and working at her parent's business, The Cowpoke Café. And "Tea for Two" by Carrie Turansky tells of Allison Bennett and her sister who are opening Sweet Something Tea Shop in Princeton, New Jersey. Since all the stories have food and a restaurant as common traits, we find that each story shares with the reader a special dessert that in some way has brought success for its preparer. Each dessert is known in that particular story for its popularity and "heavenly" taste. At the end of each story, the recipe is included for the reader to try at home. Being able to prepare a dessert that we have just read so much about makes the reader feel a greater connection to the story. "Kiss the Bride" is refreshing, upbeat, and clever. Four authors were able to put their talents together and show their individuality, but they also successfully show their ability to work together as a team. The common thread of a special traveling apron, purchased at the convention and then passed along to all the women, appears in each story. The authors obviously worked together to bond this element among the four stories. If you like Christian romance and cooking, you should thoroughly enjoy this compilation. I highly recommend this book!

Published by Thriftbooks.com User , 15 years ago
This novella starts with a very fun premise~ a Kiss the Cook apron passed between friends~ and provides four stories about female restaurateurs falling in love. Each story provides a unique perspective from love interests with competing restaurants to military romance budding long-distance and ending with a story of suspense, humor, and a great takeaway about forgiveness. A favorite feature is the yummy recipes provided with each story.
Trustpilot
Copyright © 2022 Thriftbooks.com Terms of Use | Privacy Policy | Do Not Sell My Personal Information | Accessibility Statement
ThriftBooks® and the ThriftBooks® logo are registered trademarks of Thrift Books Global, LLC