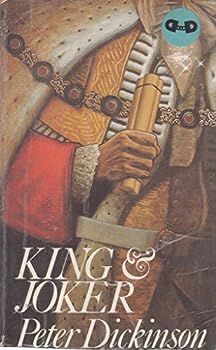 This description may be from another edition of this product. In the cavernous halls of Buckingham Palace, a series of pranks lead to murder in this mystery by CWA Gold Dagger winner Peter Dickinson Princess Louise and her father, King Victor II of England,...

Published by Thriftbooks.com User , 13 years ago
Peter Dickinson is one of my favorite authors, so maybe I'm biased, but I really enjoyed this book. I suppose it's not one of Dickinson's best, but his standard is extremely high, so that's faint criticism--I do recommend it strongly. Because its heroine is a teenager, it almost belongs in his 'teenage' line of books, along with 'The Gift', 'AK', etc. But it's a mystery, which they are not, and it has a pretty sophisticated context. Dickinson routinely creates amazing contexts for his mysteries, often making them cross the line into science fiction, and this one--the heroine as Princess in an alternate-universe odd British royal family--is explored quite well. He carries on a theme--of the adolescent in danger of taking refuge in her own private universe, vs. forging mature relations to others--that he develops in a number of other books, especially two in 'The Changes' trilogy. The mystery runs intertwined with the process of the princess discovering who she is, a bigger challenge than is faced by the typical child, perhaps.

Published by Thriftbooks.com User , 21 years ago
This alternative history mystery is as charming as page turning. Taking place in the present, a different royal family (Prince Edward Victor didn't die in the 1890's and leave his fiance free to marry his brother George to later become George V and Mary)is presented with a problem. Someone is killing courtiers and knows a long hidden royal secret. The tale, told by the kings' daughter, is a clever story of celebrity. love, and danger. This is thorougly recommended. It is followed by a sequeal.
Copyright © 2020 Thriftbooks.com Terms of Use | Privacy Policy | Do Not Sell My Personal Information | Accessibility Statement
ThriftBooks® and the ThriftBooks® logo are registered trademarks of Thrift Books Global, LLC