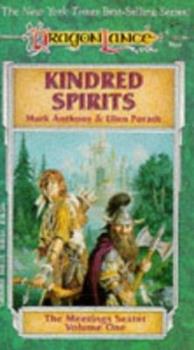 by Ellen Porath and Mark Anthony

Magic and Murder When Flint Fireforge, dwarf and metalsmith, receives a wondrous summons from the Speaker of the Sun, he journeys to the fabled elven city of Qualinost. There he meets Tanis, a thoughtful youth born of a tragic union between elf and man. Tanis and Flint, each a misfit in his own way, find themselves unlikely friends. But a pompous elf lord is mysteriously slain, and another elf soon meets the same fate. Tanis stands accused, and if...

Published by Thriftbooks.com User , 20 years ago
First off, let me say that the synopsis mentioned above isn't exactly correct. Second off, keep in mind that this *is* a mystery-type novel. Very well done, too might I add, lol. The story of how Tanis and Flint (he's as grumpy as ever!)came together is told here, alas evil is afoot. Someone is killing off elves, and circumstances are just right for Tanis to be accused. Flint has to find evidence of Tanis' innocence or he (Tanis) will be banished... a fate worse than death for elves...This story also follows many childhood years of Gilthanis, Porthios, and Laurana... touches on the love exsisting (or not) between Tanis and Laurana. Many well written clues are given in the novel, and yet (for DL fans) it's easy enough to get so engrossed in the tale that you miss them until the killer is revealed! Once I read who it was, I slapped my forehead and grumbled to myself that I should've known ;) The suspects that are created through the writing are plenty... nearly everyone... Only one complaint though... the final battle was too short, too conveniant, too 'of all the luck'... but this setback doesn't really cut into the enjoyabilty of the novel.

Published by Thriftbooks.com User , 20 years ago
I found this book very entertaining. Probably one of the more better books in the dragonlance sage, other than the ones written by W & H. It was a good read, complete with humor, intrigue, and action. The book went into the life of Flint Fireforge before meeting the half-elf, Tanis. Upon meeting, the two grew to be quick friends. But when Tanis is accused of murder, Flint has to help him get clear. I felt that the book was good. While it didnt have the most action in he world, it was still a nice read. The only thing i didnt like in this book was the relationship between Tanis and Laurana. But that is another story. Anyway, i recommend it. Buy it, Read it, Love it.

A Must Read For All Elves

Published by Thriftbooks.com User , 22 years ago
This is an enthralling story of Tanis from his early roots in Qualinost.Here begins his life long friendship with the unforgettable Flint Fireforge.Here begins his life long captivation of the all too alluring Lauranathalsa.(To my satisfaction the human woman Kitiara has yet to be born and belongs no where in this story)Here begins his life long torment,knowing he will never be accepted among his homelanders.This story offers an interesting look into the past of my three favorite characters.One of my favorite books so far.....

Published by Thriftbooks.com User , 25 years ago
This book is one of my all-time favorites. For anyone who has never read a Dragonlance book (this one in particular), I have one thing to say to you. RUSH, RUSH to the bookstore and pick this one up! I am an elfaholic, and this book sates my cravings wonderfully. It is set in beatiful Qualinesti, and tells of Tanis Half-Elven's early life in a predjudiced society. It made me cry. Rare is the novel that can do that

Published by Thriftbooks.com User , 25 years ago
This story is a perfect example of how a book series can be written by more than just one author. Since Margaret Weis and Tracy Hickman started the Dragonlance novels over a decade ago, fans have been enthralled by the stories of the people of Krynn. The people were thirsting for more and now they have got it! Stories from all the heroes and villians were brought into a new life. This book is just a perfect example of this. In the Legends Trilogy parts of Tanis and Flint's past was discussed, but the true story was never told. Mark Anthony and Ellen Porath have told a story that would be Flint's liking. They put the peices of Tanis's relationship with his family and his love for Laurana. Also Flint and how he came to know Tanis and the the Speaker of the Suns. Finally they gave the elves a culture and class that had not been reveiled. But with that culture it showed the dark side that the elves have. I would reccomend this book to any Dragonlance reader
Trustpilot
Copyright © 2022 Thriftbooks.com Terms of Use | Privacy Policy | Do Not Sell My Personal Information | Accessibility Statement
ThriftBooks® and the ThriftBooks® logo are registered trademarks of Thrift Books Global, LLC