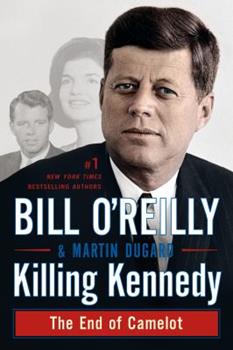 Killing Kennedy: The End of Camelot

by Bill O'Reilly and Martin Dugard

A riveting historical narrative of the shocking events surrounding the assassination of John F. Kennedy. In this #1 New York Times Bestseller, the iconic anchor of The O'Reilly Factor recounts in gripping detail the brutal murder of John Fitzgerald Kennedy - and how a sequence of gunshots on a Dallas afternoon not only killed a beloved president but also sent the nation into the cataclysmic division of the Vietnam War and its culture-changing aftermath...

Published by Brad Rye , 8 months ago
I ordered and paid for a hardcover version but received a paperback edition today which I can't read because the print is too small. Not happy about it but don't know how to return book so I'll donate it to library.

Published by Pat , 1 year ago
I have not read the book as yet. I was so disappointed in the condition of the book I couldn’t think! Pages were ripped out, cover bent. Awful!! I would call the condition, poor at best! I tried to rate 0 stars, but was not able to. Will not order again. The other book was ok but was wet before and had an odor.

Published by dave , 2 years ago
Worse book I ever read. More missing than what's in this book. How about Mr Kennedy Firing Alan Dulles, the CIA leader. How about Mr Dulles's brother being Mayor of Dallas. How about Mr Kennedy signing using power to end the Fed Reserve system. How about LBJ being a shyster big time. How about Mr Kennedy's first choice for running mate and it wasnt LBJ. How about the CIA meeting with Oswald and his russian wife. They threatened her with expulsion back to Russia. Texas law requires a TX medical examiner to do an autopsy and the body was transported out of the area without a real autopsy. Many other important feature missing in this worthless book. The only book I have ever ripped up and thrown away EVER. Lets get thruths out there. PROPAGANDA at its best. Next time dont think of what the characters think or say. Its all made up in this lousy book

A story of Kennedy's accomplishments, indiscretions, and foibles

Published by booklover.teresa.hill , 4 years ago
I enjoyed this second "killing" series book by Bill O'Reilly. And the fact that the author is the narrator, adds another level of enjoyment. His voice is a perfect addition to the contents of the book. This is a wonderful review of the life of John F. Kennedy...all of his wonderful accomplishments, his indiscretions, and his foibles. While I was only three years old when JFK was murdered, I grew up hearing lots of stories about his presidency and the assassination. But this book brings to light some details in both the years before Kennedy becomes president and then after he wins the privilege of being the leader of the United States. Bill O'Reilly and Martin Dugard have written a wonderful story of the "end of Camelot." I am looking forward to listening to another audio book in the "killing" series.
Trustpilot
Copyright © 2022 Thriftbooks.com Terms of Use | Privacy Policy | Do Not Sell or Share My Personal Information | Accessibility Statement
ThriftBooks® and the ThriftBooks® logo are registered trademarks of Thrift Books Global, LLC