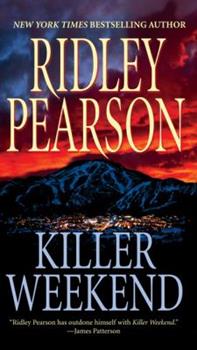 (Book #1 in the Walt Fleming Series)

THE NEW YORK TIMES BESTSELLER THAT?LL LEAVE READERS BREATHLESS. Controversial New York State Attorney General Liz Shaler is announcing her candidacy for president at a high-profile convergence of media heavy-hitters. Also in attendance is an assassin with a brilliant and foolproof plan.

Published by Thriftbooks.com User , 13 years ago
I recently discovered Ridley Pearson. He's a great writer; one by one, I'll read all of his novels. I especially like the Lou Boldt series, but Killer Weekend was a super thriller. Trish Huff

Page Turner Of A Book!

Published by Thriftbooks.com User , 14 years ago
Eight years earlier Elizabeth Shaler is accosted by an intruder who has broken into her house and is armed with a knife.She is rescued by then deputy Walt Fleming. Fleming has since then been elected Sheriff. This all takes place in Sun Valley Idaho. Shaler the New York Attorney general is returning once again to Sun Valley Idaho. She is going to attend the Cutter Communications Conference. This is a yearly business event hosted by billionaire Patrick Cutter. Shaler plans to announce at this event her intentions to run for the office of President of the United States. There is heavy security at thie event which includes the Secret Service and the Sheriff's Department. A professional assassin named Milav Trevalian has managed ti infiltrate this event disguised as a blind man. He also uses another identity which allows him to roam the Conference. He has devised a sinister plan to assassinate Elizabeth Shaler. His role as a blind man plays heavily into his plan. It becomes the job of Sheriff Fleming and the Secret Service to stop the plot. It is difficult because they are often clashing. It is a race against time to stop the assassination plot. This is a very exciting book that you will enjoy reading.

Published by Thriftbooks.com User , 14 years ago
This book goes with all of his great writings you must collect all of his books in order to understand what I am trying to say.

Published by Thriftbooks.com User , 14 years ago
Ridley Pearson has created a wonderful thriller that will hold your attnetion throughout. Non-stop action and intrigue make this book a great book for the summer. Well written, this book's character development and subplots make it a fun book that will certainly maintain your attention. Definitely recommend.

Published by Thriftbooks.com User , 14 years ago
Attorney General Elizabeth Shaler reflects back to eight years ago when she was a victim and almost killed when an intruder attacked her in her Sun Valley, Idaho vacation home. Only the efforts of a dedicated rookie cop Walt Fleming saved her life. Walt's excellent police work has been rewarded as he is the Sun Valley sheriff. However, he and his staff are preparing for a difficult weekend as Ms. Shaler, who is planning a run for the White House, has come to town to announce her intentions at an upper crust conference. Fleming is concerned that a hitman coming for Shaler has vanished off the radar screen when he should have been on the plane from Salt Lake City. Shaler's security team and the zillionaire host scoff at Fleming's paranoia; writing him off as a local rube trying to pretend he belongs with the big guys. Meanwhile assassin Milav Trevalian has usurped the identity of a Utah blind man he killed because he knows no one would expect a "blind" person to be the professional killer. This is an exciting police procedural political thriller starring a likable dedicated hero who is treated with disdain by the "big boys and girls" and by his staff; one deputy believes the job should be his just like Fleming's wife is apparently his. The motive why Trevalian's employer wants Shaler dead is not provided with any depth, but most readers will not care as the action never stops. The audience will enjoy this fine tale starring an overworked sheriff struggling with a murder investigation, an animal cruelty case, the Shaler protection entanglement, and his ambitious treacherous deputy in what proves to be a lost KILLER WEEKEND. Harriet Klausner
Copyright © 2020 Thriftbooks.com Terms of Use | Privacy Policy | Do Not Sell My Personal Information | Accessibility Statement
ThriftBooks® and the ThriftBooks® logo are registered trademarks of Thrift Books Global, LLC