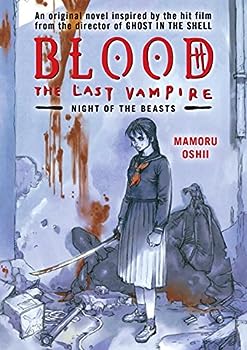 At Yokota Base in Japan, American soldiers stand guard at the brink of the Vietnam War. Although they fear the enemy outside their base, an even more dangerous enemy waits within - bloodthirsty... This description may be from another edition of this product.

Published by Thriftbooks.com User , 14 years ago
Finishing this book tonight the content is fresh in my memory. I have to say, i am not the type of person that reads books. I stay as far away from books as possible. However, I really enjoyed the movie Blood The Last Vampire. As i'm sure most whom read this did. Spoilers below.... I was expecting more vampire action, and a lot more Saya. But the story actually took a different direction. It starts of with young High School rebel Rei(forget the word that was used)Protester in 1969 Japan. After their large group is attacked by police Rei makes his escape and witnesses a girl named Saya checking her blade after just killing a monster. Rei is confronted by 2 foreigners and is knocked unconscious and wakes up in a hospital. He is confronted soon after by a man named Goutuda who claims to be a cop. Throughout the book, Rei and his group of High School protesters...Try to figure out the answer to why there have been killings of several members of a very private organization called SR that their friend is part of. Fearing for his life they join Goutuda to help him figure it out why these members are being killed and why the blood is drained from their body, and why this girl named Saya transfers to the school and class of those members days before their dissapearance. After another encounter with Saya, Rei and Goutuda are enlightened(after being kidnapped by the foreigners)In an extrememly long history lesson. After that Rei goes back home and his final encounter with Goutuda and Saya takes place in the school, where its seemingly over... The book ends in an Epilogue where 30 years later where it explains what happened to the boys after the events of the book. As well as Saya's final appearance. -- -- Thats my somewhat brief summary of the book. Saya appears 4 times in the book, and is very brief each time. This book has a lot of Very LONG talks in it. Somewhat interesting. They talk about corpses and how to dispose of a body. And about the evolution of vampires and humans. I wouldnt call this a sequel to the anime movie, its more of a side story of someones encounter with Saya. I would reccomend you read this if you really enjoyed the anime movie. It doesnt go into Saya's past at all. All we really learn about Saya is she is half human half vampire from experimental breeding, her being the only successful one. And that she hates humans and vampires but alias herself with the humans so that she can kill the vampires she hates...(read the book it makes more sense...) All in all its a great tale on the life of a teenage boy in japan in 1969 and his encounter with a girl named Saya. For a side note, I dont think you have to see the movie to enjoy this book. Because the only character from the movie is Saya. If anything, this might be a good prequel to the movie even though its afterwards... P.S.S. If you are a fan of Blood+ a spinoff of Blood the last vampire, then this book and the movie, as well as the Blood the last vampire 2002 manga

Blood: The Last Vampire: Night of the Beasts

Published by Thriftbooks.com User , 16 years ago
The subject of this novel is Saya, the vampire hunter who appeared in the film Blood: The Last Vampire. Night of the Beasts is not directly related to the events in the movie, but it does take place in more or less the same setting (Tokyo area in the late sixties), probably soon after the events of the movie. The events in this story are related from the point of view of Rei, a teenage boy who dabbles in radical left-wing political activism and can generally be described as bored and disgruntled. The story starts off with Rei taking part in a mass protest which turns out to be anything but boring: running from riot police, Rei stumbles across Saya dispatching a vampire in her usual bloody fashion. Rei's role as witness to this event gradually draws him into a web of intrigue and deceit as he is sought out by various people of questionable motives who are also interested in the activities of Saya and the organization she works for. Blood: The Last Vampire is actually an extended project that encompasses novels, manga, PS2 games, and of course the movie. So far only the movie, this novel, and one manga (Blood: The Last Vampire 2002) have been translated and distributed in English. Most readers of this novel will likely be most familiar with the movie (also directed by Mamoru Oshii), so I should point out right away that though most fans of the movie will enjoy this book it is very different from the movie. Where the movie was driven mostly by action, Oshii's novel is driven mostly by dialogue. Through conversations with various people who are involved in or investigating the activities of Saya and the vampires that she hunts, the main character begins to learn more about the background behind the horrific event that he witnessed. Rei turns out to have more backbone than his original impression would suggest, and however reluctantly he becomes actively involved in the hunt for the vampires that are threatening both him and his friends. Through this we learn a great deal about the vampires and about the organization that is helping Saya to hunt them. The great strength of this novel is that Mamoru Oshii has clearly done his homework before writing this further contribution to the Blood project. He approaches the idea of the vampire intelligently from the viewpoint of legend and myth, evolution, paleoanthropology and history. By the time the story is done he has provided a very rich context for the creatures which in his movie were just mysterious blood-sucking monsters. Unfortunately, this creates a couple of drawbacks. First, many sections of the novel move very slowly. Characters provide the background information in long, rambling speeches which often feel unnatural and appear to be just rather clumsy attempts to provide this information to the reader. Secondly, the character Saya who should really be the focus of the story is pushed to the background... characters talk in great detail about her, but almost never talk *with* her. The slow pacin
Trustpilot
Copyright © 2022 Thriftbooks.com Terms of Use | Privacy Policy | Do Not Sell My Personal Information | Accessibility Statement
ThriftBooks® and the ThriftBooks® logo are registered trademarks of Thrift Books Global, LLC