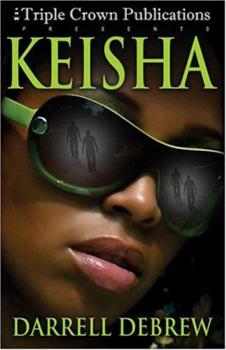 Y'all gon' pay the price like nobody ever has. As her mother lay dying in her arms, Keisha vows to herself to seek revenge on those responsible for the brutal, senseless robbery that ended in her loved one's murder. Follow Keisha as she discovers that Clarence, the man she wanted to dedicate her life to, is responsible for the murders. The one and only goal of her revenge is to make him suffer like she is suffering. Murdering Clarence and his partner...

Published by Thriftbooks.com User , 15 years ago
This book was very good, not your ordinary hip hop novel. The plot was original and the characters vivid and believeable.

Published by Thriftbooks.com User , 16 years ago
As Keisha lay with her mother's dying body in her arms, she vows to get the ultimate revenge on who has done this horrible deed. Even if it's one of the least suspected-her own boyfriend. When those last words seep out of her mother's lips, she doesn't want to believe them. Though persuaded to do so from his friend, Danny Boy, Clarence still committed one of the most heinous acts anyone could ever dream of. However, soon after confusion and betrayal are replaced with anger and vengeance. She swears to do whatever it take to do him justice. So it makes sense when she becomes best friend with Jezebel, known from `The Clit', a woman empowering group. She teaches Keisha the tricks of the trade in luring in men, and getting what they want from them. It doesn't take long for a plot to form to get the ultimate revenge. With all that going on, Clarence and Danny Boy's on going conflict and private investigators Bambi and Sally on the case, sniffing out for clues anyway possible, the town's about to see some drama they never dreamed of before. In my opinion, the book was a slow read and Keisha's emotions were downplayed, but all of the action, suspense and drama made up for it at the end.If you're looking for a good mystery, you might want to pick this one up.

5 Stars is not enough for this one.

Published by Thriftbooks.com User , 16 years ago
I loved this book from page one. Every woman can relate to this book. Keisha is straight up gansta. I loved her. I hope there is more of her to come. Great book, fast reading. I read it on a 5 hour flight.

Published by Thriftbooks.com User , 16 years ago
I liked this title - - it wasn't TCP's best but it was entertaining. To be fair to the author, I didn't think the grammar was awful, definitely showed improvement. To the last reviewer, don't you mean some sentences didn't make "sense"? Maybe you aren't quite sure how to spell, either...
Trustpilot
Copyright © 2022 Thriftbooks.com Terms of Use | Privacy Policy | Do Not Sell or Share My Personal Information | Accessibility Statement
ThriftBooks® and the ThriftBooks® logo are registered trademarks of Thrift Books Global, LLC