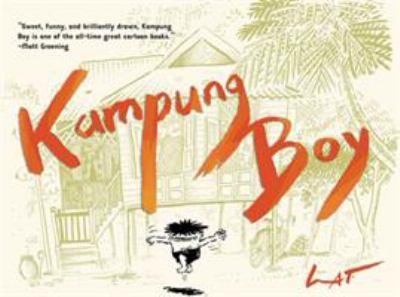 (Book #1 in the Kampung Boy Series)

by LAT (Mohammad Nor Khalid)

Kampung Boy is a favorite of millions of readers in Southeast Asia. With masterful economy worthy of Charles Schultz, Lat recounts the life of Mat, a Muslim boy growing up in rural Malaysia in the 1950s: his adventures and mischief-making, fishing trips, religious study, and work on his family's rubber plantation. Meanwhile , the traditional way of life in his village (or kampung ) is steadily disappearing, with tin mines and factory jobs gradually...

Published by Thriftbooks.com User , 13 years ago
Here's a graphic novel about a boy growing up in Asia. It's fun to read because there is a lot of humor. I tried to read it to my 4-year-old son, but it's too long for him to pay attention.

Published by Thriftbooks.com User , 13 years ago
Kampung Boy is one of the sweetest and lovely graphic novels I have read in a long time. A pre-quel to Town Boy, Kampung Boy gives us a first hand account of Lat's early growing-up years in his tiny village in Malaysia. Intricate drawings capture the stance and the expressions of his family and neighbors beautifully; they convey the flavor and atmosphere of his little town; the words are just right; the sentiment is nicely doled out & not treacle-y. A real love letter to his childhood!

Published by Thriftbooks.com User , 13 years ago
Having spent most of my childhood in Malaysia, I grew up reading Lat comics. As I grew older, I began to collect his works and even after more than two decades, I still treasure his works, and find them to be great character studies of ordinary folk, as well as an authentic portrait of life in Malaysia. In Kampung Boy, Lat revisits his childhood days in a Malay village located in the tin-mining district of Perak. His drawings are simple, and even a bit stereotypical [based on the usual profiles of the different ethnic races, be it Malay, Indian or Chinese], yet they aptly capture various emotions such as joy, anger, frustration etc. The stories are wonderfully authentic, for I myself have spent some time in small Malay villages, and know exactly how it was like back then. Things have changed now of course, with the inevitable rapid development that has characterised much of Malaysia. This makes Lat's work all the more important - for it captures a bygone era, a more innocent time, when kids were left to their own devices to entertain themselves [having no TV, computers or other modern amenities]. Fishing, swimming in the river, even tin panning[!] kept Lat and company occupied back then. I hope Lat's work gets wider recognition [he is a legend in the annals of Malaysian comics], and I think Kampung Boy is definitely a book that will appeal to most kids, and even adults who enjoy simple, heartfelt stories peopled by memorable characters.

Great for any age.

Published by Thriftbooks.com User , 14 years ago
This is quite a wonderful graphic novel and should be in every k-12 school library -- probably several copies because once parents get their hands on it they'll want to keep it. It provides an engaging glimpse into growing up as a boy in a Muslim Malaysian village where the traditional agricultural life is on the verge of disappearing. For history/social science teachers it provides great material for talking about the practice of Islam outside the Middle East, industrialization, education, friendship and childhood rites of passage, -- how to have fun without screens. When someone (firstsecond books?) publishes the follow-up volume, Town Boy, there is terrific material for discussions of multiculturalism. But apart from all these classroom excuses, it is hilarious and will just make you happy.

Published by Thriftbooks.com User , 15 years ago
Everybody talks about how important it is to promote multiculturalism to our children. Kids are fed the usual everybody's different/everybody's the same stuff year after year, sometimes illustrated with color pictures in a social studies textbook. The obvious conclusion to draw from this would be to think that this would mean that the world of publishing books for kids would be rife with writers from all over the world. Yet one of the biggest shocks I received when I became a children's librarian was to see the lamentable lack of books for the kiddies from any countries aside from the U.S., Canada, Great Britain, and sometimes Australia. I was baffled. We hardly get any books from India? But aren't they an English speaking country anyway? And how about, oh I dunno, the ENTIRE CONTINENT OF AFRICA? Nothing? Nada? Oh, I was pissed, no question. Since that time, I've put a fair amount of energy into trying to read every little tiny children's book from another continent, no matter how small. Lately, however, I've been falling down on the job. I don't know if it's ennui or the fact that I've been reading a lot of books solely from the U.S. lately, but when "Kampung Boy" flew out of left field and ker-whalloped me upside the head, I never saw it coming. Sweet child of mine, this isn't just a graphic novel (with far more emphasis on the "novel" part than usual). It's a graphic novel originally set and published in Malaysia. And the year it was originally published in Malaysia? 1979. Now the book, all thanks to First Second Books, has come here to the U.S. o' A. and I couldn't be happier. Let's practice a little of what we preach, okay? You believe in multiculturalism? Then give this book to a kid right now. Mat was born in Malaysia to a stern but pleasant mother and a deeply warm and caring father. Raised in a kampung (or village), the reader watches as he goes through the basic day-to-day events of growing up. The kampang is situated beside a rubber plantation and a tin mine and young Mat spends his days growing and learning. He attends school so as to learn Tajwid (reading Arabic with the proper enunciation). He makes friends with some of the local boys and spends his days swimming and checking his fish traps. At ten he's ritually circumcised (and it turns out to be far more boring than painful). Of course, Mat would love to spend his days just fishing and hanging out with his friends. His father, on the other hand, would like him to do especially well in his studies so that he can be admitted to a boarding school in another city. Mat isn't too thrilled at first, but then his father reveals to him that his inheritance is a great deal of land. Land that will be his if he passes his examination. Altogether, this is the story of one boy trying to figure out what he wants out of life. Does he stay with what he's familiar and comfortable with? Or does he leave the kampang he loves in search of better things? Lat. You
Copyright © 2020 Thriftbooks.com Terms of Use | Privacy Policy | Do Not Sell My Personal Information | Accessibility Statement
ThriftBooks® and the ThriftBooks® logo are registered trademarks of Thrift Books Global, LLC