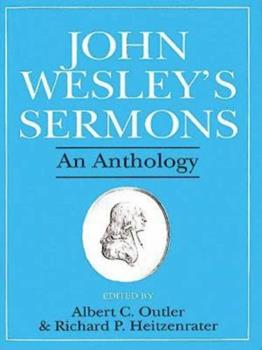 Adapted from Albert Outler's 4-volume text The Works of John Wesley , this anthology of 50 of Wesley's finest sermons are presented in an affordable, convenient paperback. Arranged chronologically with introductory commentary by Richard Heitzenrater.

Published by Thriftbooks.com User , 13 years ago
Product came very nice just as described and it was a smooth transaction all around!

Sermons of holy love and holy living.as Christ strengthens us

Published by Thriftbooks.com User , 15 years ago
While Whitefield and Edwards were leading the Great Awakening the US John Wesley was having a far more profound and lasting effect on spiritual matters in England. Even Whitefield admitted to that. It was the formation of classes (Christian community) that made the difference. Whitfield's following was scattered during his lifetime while Wesley's preaching, printing and organization led to the formation of the British Methodist and the Methodist Episcopal churches. Reviewing these powerful sermons gives us pause to consider how much has been lost in mainline protestantism over the past 200 or so years. I'm still looking for a church where the preacher will boldly preach the Biblical messages that Wesley delivered. Not merely threats of hell, but God's promise of holiness in heart and in life. Methodists, mainline protestant denominations, and Baptists have largely fulfilled Wesley's fearful concerns that churches may eventually have the form but not the power of godliness. These sermons are the bulk of his best. There are 53 or so of his 140-odd sermons represented. It's time to take them seriously. Christians are growing too clever by half to follow CHrist instead of their own pride. Let Wesley help to wake you up to your faults and mine so that we may always strive for greater holiness. For those who love sermons and the pattern of Christianity among pious leaders during a period of great revival, this is easily worth a 5 star rating.

A Look into the Mind and Theology of John Wesley

Published by Thriftbooks.com User , 17 years ago
The book contains 50 of John Wesley's sermons, all reflecting a door into the mind and theology of John Wesley. The book is edited by one of the late great minds of Wesleyanism, Albert Outler. I found the book to be very rewarding, allowing me to experience and have a deeper appreciation for John Wesley's theology, which to a large degree has been debated because of Wesley's different stands on certain issue's through out his life. The sermons that Outler & Heitzenrater have selected for this book, allow the reader to know the heart of John Wesley, which Wesley expressed through out his life, and it allows the reader to have a grasp on John Wesley's theology as it grew through out his life time. The way that Outler and Heitzenrater do this, is by compiling the sermons of John Wesley in a chronological order allowing the reader to flow through one sermon to the next, and see John Wesley's theology unfold from a young man to a old man, kind of like unfolding a neatly rapped package with ribbon and bow. Finally near the end, in one of John Wesley's sermons entitled "On the Wedding Garment," we see Wesley restating his beliefs that he has held firm to since a young man, and this sermon is written a year before his death. I gave this book five stars, because of how the book of sermons was compiled and laid out, causing any Wesley reader or fan to desire the next sermon in order to see the evolution of Wesley's theology and his firm beliefs.

A Good Place to Start

Published by Thriftbooks.com User , 20 years ago
For those interested in catching a glimpse of what John Wesley wanted his Methodists to believe, this is a good place to start. Most of these 50 sermons were included in his Works (an official collection of his writings put together by Wesley himself), and they were intended to help guide those in his movement in understanding the basic theological ideas that he considered important. This anthology adds to the official selections a few selected by Outler from among Wesley's uncompiled sermons. These also give us an interesting look into Wesley's heart and mind.One of the greatest strengths of this book is that each sermon is preceded by an excellent introduction. This sets the sermon in context and provides a clearer point from which to begin trying to understand what Wesley is saying. This is an excellent collection compiled by superb editors.

Published by Thriftbooks.com User , 21 years ago
John Wesley was the founder of Methodism, and this is a "best of" collection of fifty of his sermons, organized chronologically so that you can follow the development of his thought from 1730 to 1790. The sermons are long and dense but carefully crafted, and the theology is powerful and nuanced. Many of the sermons deal masterfully with what I think is one of the toughest but most important juggling acts in Christian theology: maintaining both (a) that our salvation comes entirely through the overflowing grace of God and is in no way merited or achieved and (b) that it is vitally important that we do good, partake of the sacraments, read scripture, pray, and all that good stuff. Other sermon topics include religious bigotry, religious zeal, the use of money, the repentance of believers, and the omnipresence of God. If you're interested in Christian theology and won't be too put off by Wesley's dry, dense writing style, I highly recommend this book.
Copyright © 2020 Thriftbooks.com Terms of Use | Privacy Policy | Do Not Sell My Personal Information | Accessibility Statement
ThriftBooks® and the ThriftBooks® logo are registered trademarks of Thrift Books Global, LLC