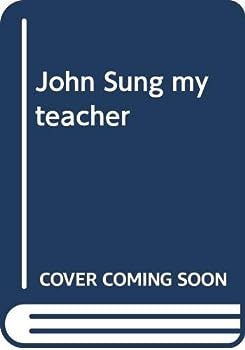 Biography of Dr. John Sung This description may be from another edition of this product.

Published by Thriftbooks.com User , 16 years ago
This book, John Sung my Teacher, is a biography of one of the greatest evangelists in of the 20th centaury, and probably the most influential soul-winner of China and South-East Asia. This biography is written by Rev. Timothy Tow, one of the thousands who were saved under the spirit-filled preaching of Dr. John Sung during his revival campaigns in Singapore in 1936. Thus the biographer is able to give a personal eyewitness account and testimony of the life and work of John Sung, being one who was saved and also called to the full-time ministry under his preaching. This biography gives a chronological account of the life of Dr. John Sung, focusing on his unique soul-winning ministry. Special attention was given to his methods of preaching, and some `secrets' behind his success. With regards to homiletics, this biography gives a very complete picture of what a successful (in the sight of the Lord) preacher and minister of the gospel should embody. In both his life and his works, Dr. John Sung is a model which all aspiring ministers of the gospel can look towards - in his zeal, his faith, his prayer life, as well as his single-mindedness in his ministry. Perhaps one of the most striking aspects of the ministry of Dr. John Sung was his incessant preaching against sin. After his first preaching experience at Bethel High School, he realized halfway through that one aspect was missing from his sermon - that was the preaching against sin. Therefore after that incident, he hence fore resolved to `hew a clean line... to deal rather with the needs of sinners, with the blood of Christ as their only cure.' Therefore all his evangelistic efforts always had a strong emphasis on renouncing sin. His results thus speak for themselves, for at every meeting thousands would come forth with tears of genuine repentance, seeking only after the blood of Christ which could cleanse them for their sins. Whilst fervently winning souls through the preaching on the pulpits, the secret behind Dr. Sung's success was neither his eloquence nor powerful preaching, but rather, it was his closet prayer and studying of God's word. From the time of his conversion all the way till his death, Dr. Sung was a man of much fervent prayer, where he interceded for the thousands of souls who wrote to him. It also always committed each of his revival campaigns to the Lord, trusting that the Holy Spirit would be the one who would bring repentance upon the souls he preached to. He was also a man of one book - the Bible. Without fail he would read 11 chapters a day and 13 on the Lord's Day for everyday till his death. It was thus this close relationship that he had with God that showed through in his preaching and passion for all the lost souls. These are just two of the many lessons I have gleaned with regards to homiletics from the reading of this book. Many other aspects of the life and ministry of John Sung have also inspired and spurned me on to a more fervent and zealous Christ-lov
Trustpilot
Copyright © 2022 Thriftbooks.com Terms of Use | Privacy Policy | Do Not Sell My Personal Information | Accessibility Statement
ThriftBooks® and the ThriftBooks® logo are registered trademarks of Thrift Books Global, LLC