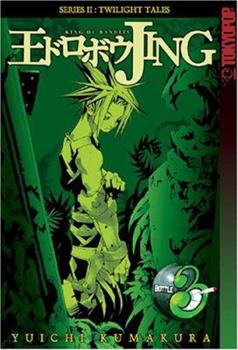 (Book #3 in the Jing: King of Bandits: Twilight Tales Series)

'Twilight Tales' is a new series with a fresh look for our heroes Jing and his feathered friend Kir. Jing and his gang are on the hunt for the Lost King, who only appears when there is a coronation - or a sacrifice.

Published by Thriftbooks.com User , 16 years ago
During his search for gold and other stuff, he finds out about his mother. In twilight tales, Jing's mom has a messenger that helps Jing with the path he took, being king of bandits! When I first had the book, number one, it was ok. Then when I got into it, it got fascinating and kind of funny. I would rate this book 8 out of 10 because all kinds of events are all astonishing. Try this book out , you might even like it. In very book, it's about girls getting hurt or about to get hurt. I don't know everyone's taste about this book, but I like this book. I think if you really like comic book this is the book you would really like. If you like books about adventure this is the book you want. If you like girls about to be hurt this is still the book you want. You could find this book in book places. Try it at Newberry Comics they got comics there too! This book gave me an idea of being a bandit and a person on the streets. If you read this book, you will find out why Jing does this for living!

Jing and Kir, on the road again...

Published by Thriftbooks.com User , 16 years ago
Contrary to the ill-informed bash-job below, my first Jing book was the first of the Twilight Tales series and I adored it. It did take a while to get into, I will admit, but whenever I re-read it, I find out I like it more and more. I don't consider it a step-back, but rather an evolution for the character. Jing (according to Postino in Book Four, I believe) was 15 in the first series. To be cliché, the world is starting to even look different to our favorite bandit, and it comes across in the manga wonderfully. True, the first series was a lot lighter, but it was basically all fluff. Can anyone honestly say they cared about what happened to Rose or Benedictine or Kirsche from the first series? Shin Liu, the first official "Jing Girl" from the first and second volumes of Twilight Tales had a complete background story. She's her own character, rather than just a foil to Jing and Kir. I'm saddened that people will take the ill-contrived hateful babble of the other review and not pick up this series. It's quirky, and it does take some time to get used to the style, but it's wonderful and I already have the release date for the third book marked on my calendar.
Copyright © 2020 Thriftbooks.com Terms of Use | Privacy Policy | Do Not Sell My Personal Information | Accessibility Statement
ThriftBooks® and the ThriftBooks® logo are registered trademarks of Thrift Books Global, LLC