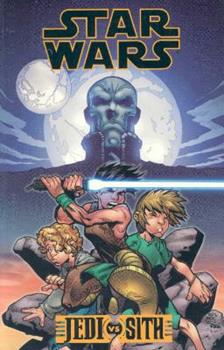 According to legend, the Sith always number two -- a Master and an apprentice. It was not always this way. A thousand years ago the Sith were many and they battled endlessly with the Jedi Army of Light. Lord Kaan ruled the Sith Brotherhood of Darkness and sought the destruction of Lord Hoth and his Jedi followers. Recruited into the war by a scout, three friends venture onto the battleground and march into destinies far greater and different than...

Bane of the Sith

Published by Thriftbooks.com User , 14 years ago
If yoou have read the novels by Karpyshyn, you'll love this TPB. The comic covers all events thru the first Darth Bane book "Path of Destruction", as well as the first few chapters into the second novel "Rule of Two". The roll of main character is shifted from Bane himself, to a trio of cousins, one of whom becomes Banes apprentice Darth Zhanna. This paperback helps to fill in the blanks of the war between the Kaan's Sith Brotherhood of Darkness against Hoths Jedi Army of Light, while Bane is studying on Korriban. If you're a fan of the Darth Bane Dualogy, you'll love this book.

Published by Thriftbooks.com User , 14 years ago
There's a possibility you fall into one of two groups: you're looking for SW comics about Sith or you just read the latest Darth Bane book and are looking for SW comics about Sith. This comic can either satisfy or dissapoint you depending on what are you looking for. There are a couple of Sith moments in the comic (which the story is supposed to be Sith centered) but is more of a story of how things can be heroic from a certain point of view and when you change it it looks completely different. The comic posses a good question about the nature of evil. As you know, there's pure natural evil, but there's also the slight "maybe it is, maybe it isn't, from a certain POV" evil. If you read the Darth Bane novel this will be a good complement (with some slight changes in the sequence of events), if you're looking for a comic it is a good read that will leave you asking more question than when you began.

Published by Thriftbooks.com User , 15 years ago
A seriously underrated piece in the Star Wars Expanded Universe, Jedi vs. Sith tackles some serious issues, especially what "is" and what "isn't" a Jedi in a far more mature way than other works.

A Great Edition to Any Star Wars Collection

Published by Thriftbooks.com User , 16 years ago
I think this was a really well written story, whose characters were well thought out. I really hope the Dark Horse Comics does more this Time Period in the Star Wars Timeline.

Published by Thriftbooks.com User , 20 years ago
This book has it all. Do you want to get away from the movies and other books put between a little before episode one and 25-30 years after episode 4, get this graphic novel. The three kids make the comic great. You get to see Tomcat, his cousin, and his little sis have their fate combined. They must chose the sides of which they will stand by. See what happens in the great battle and the surprising ending. Also you get to see whats happening w/ illustrations instead of words. This graphic novel is a must-get. Check it out at a borders near you!
Trustpilot
Copyright © 2022 Thriftbooks.com Terms of Use | Privacy Policy | Do Not Sell My Personal Information | Cookie Preferences | Accessibility Statement
ThriftBooks® and the ThriftBooks® logo are registered trademarks of Thrift Books Global, LLC