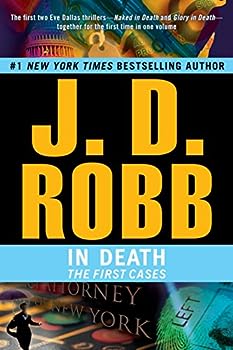 In Death: The First Cases

(Part of the In Death Series)

This description may be from another edition of this product. #1 New York Times bestselling author J. D. Robb presents the first two In Death thrillers featuring Lieutenant Eve Dallas-- Naked in Death and Glory in Death --together in one volume for the first...

Published by Thriftbooks.com User , 12 years ago
It says - right on the cover - that this book contains the first 2 In Death cases: Naked in Death & Glory in Death. There's nothing tricky about that. When I saw the title, I wasn't confused at all. I think it's great that books get reprinted and it's only natural there's going to be a different cover design. It's not a big deal. And before I spend my money, I make sure I know what I'm buying.

Published by Thriftbooks.com User , 16 years ago
"Naked In Death" is the first book in J. D. Robb's Eve Dallas mystery series. I have been hearing positive things about these books for a long time, and now, after reading this terrific novel, I understand why. New York City, 2058 CE, are the time and setting of "Naked in Death." Robot drones and voice activated machines do menial work, i.e., clean house, serve meals; there is a total ban on guns, (the police use lasers); major improvements have been made in medicine and technology, with advancements in genetics (and strong genetic control); airbuses for public transportation have replaced subways; tele-links replace telephones - it's not a "brave new world," yet...but there are definite pluses midway into the 21st century. Minor armed skirmishes have taken place between China and the US, and France had another revolution which lasted for a few years. The overpopulated world has more limited resources - real coffee is rare and way too expensive, as is beef and other fresh meat. Robb has not written a sci-fi series, however. Far enough into the future to make the storyline more interesting, 2058's world is still easily recognizable. Lieutenant Eve Dallas of the NYPSD is called to a murder scene where a young licensed companion, (a legalized prostitute ), has been brutally murdered with an antique handgun from the 20th century. The victim, Sharon DeBlass, is from a very prominent family - her grandfather is a US senator. An angry man who preaches morality and leads an ultra conservative branch of his party, the senator would like to totally suppress the case, and perhaps even run the investigation himself. According to friends and relatives, Ms. DeBlass apparently chose her career not only because she liked sex, she did not need the money, but because she was rebelling against her family and strict upbringing. A note was found under her body with the printed words, "ONE OF SIX." So, was the perpetrator a serial killer warning that there were to be five more murders? One of the prime suspects is a sexy Irish billionaire named Roarke. We never learn whether this is his first or last name. Perhaps if one is a billionaire, especially a tall, dark and handsome, with an Irish brogue, billionaire, it doesn't matter. He is quickly cleared of suspicion, and he and Eve embark on a stormy, intense romance - but not before murder #2 occurs. Eve, although a tough cop who made Lieutenant before the age of 30, is also very vulnerable. She doesn't remember the early years of her life, but knows that she was sexually, physically and emotionally abused by her father, then abandoned at age eight and left to the mercies of Children's Services. She has made her work her life, and letting Roarke get close to her is a first. Happiness is discovering another excellent series - and from what I have read, this looks like a winner! The writing is tight, as is the plot - an excellent and complex mystery. I really like the characters, Eve, definitely, Roarke - who li

Published by Thriftbooks.com User , 20 years ago
Naked in death starts out a really great series! Nora Roberts writes these under the name of JD ROBB. I did just start this series as I read everything I can get my hands on from Nora. If you are a new reader, you do need to start with this book and work your way through. I didn't start here first and she really builds the characters through each story that if you don't start from the beginning you miss a lot. I went back and am now starting from the beginning. This series is not Nora's romance format. Of course there is romance in there! This series is a mystery style. It takes place in NYC in the year 2058. When people do travel " off planet" and prostitution is legal. Your car drives you and you have " auto chefs " in house, car , even your office. The way ROBB writes about the future this is truly believable. Lt. Eve Dallas is a tough woman. She is strong, independent, and she truly fights and believes in her job as homicide detective. In this book she finds her main suspect a billionaire name Roarke. He is very charming, Irish, has lived a little on the edge, rich, and good-looking! Eve has now found her match. Roarke didn't have the ideal childhood either and they make the most wonderful couple. This is an excellent series, and keeps you entertained and you don't want to put the book down. Robb does a great job in making the who done it a total surprise! I highly recommend this entire series you will truly be delighted It is awesome!!!

The beginning of a great series

Published by Thriftbooks.com User , 21 years ago
The "...in Death" series starts with Naked in Death a futuristic series set in New York City in the year 2058. The star of the series is Lt. Eve Dallas a tough as nails female homicide detective who fights for the rights of the victims of murder.Eve finds the main murder suspect, a billionaire named Roarke who walks a fine line between legal and illegal, to be just a little bit too attractive for her comfort. He's Irish, gorgeous, and very charming. This series is written by Nora Roberts under the name J.D. Robb. Don't confuse the romance novels usually written by Ms. Roberts with this series. The "...in Death" series is a far cry from her usual romance story. The series is excellent and I would recommend you read all the books beginning with this one, Naked in Death.

This book is unbelievable!

Published by Thriftbooks.com User , 22 years ago
I could not put this book down. Eve and Roarke are the hottest couple in print today. I love the mystery but I love the romance even more. These two are so hot I'm surprised the book doesn't go up into flames in my hands. I have reread Naked In Death at least three times and it never gets old. The whole series is great but start with Naked and go in order because it's better that way. Roarke is the ideal lover. Rich, powerful, dangerous, sexy and totally in love with Eve Dallas. Now that is one lucky woman! Eve is a great heroine. She is smart, brave, independent and loyal. At the same time she has a past that makes her vulnerable, too. She is a real person not some flat character. I can not wait for Loyalty In Death to come out. The only bad thing is I finish them so fast. Keep writing about Eve and Roarke, Nora Roberts. Your fans will be forever grateful.
Copyright © 2020 Thriftbooks.com Terms of Use | Privacy Policy | Do Not Sell My Personal Information | Accessibility Statement
ThriftBooks® and the ThriftBooks® logo are registered trademarks of Thrift Books Global, LLC