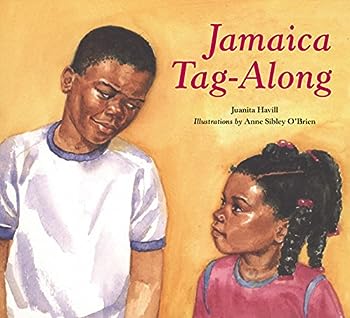 (Part of the Jamaica Series)

This description may be from another edition of this product. Jamaica doesn't want a younger child to play with her, until she remembers how she felt when her older brother excluded her from his games.

Published by Thriftbooks.com User , 15 years ago
Our daughter loves these stories, and we like them too. They're short, but pack a little weight that catch the attention of our 2 and half-year old.

Published by Thriftbooks.com User , 15 years ago
Excellent book for parents and children alike. It focuses on frienship, family values and social integration. Excellent topic for family discussion. Beautifully illustrated, a nice addition to your family library.

Published by Thriftbooks.com User , 16 years ago
A sweet story featuring a young African American girl and her older brother. Jamaica wants to tag along to Ossie's pick-up basketball game, but he forbids it. After all, it's not cool to have a younger sister hanging around. She sneaks along anyway, and causes her brother and another player to fall down on the court when she springs from nowhere and grabs the ball. She exits to another section of playground. Castle building proves diverting, but soon she has a little visitor. A Hispanic American toddler named Berto wants to play, too, and is soon messing up the castle. Initially, Jamaica protests, but then sees the similarity between them. They both want to hang out with older kids. O'Brien's watercolor illustrations are attractive and effective with their warmth and sharply conveyed emotions. This would be a good read aloud to pre-K to second grade.

How to learn to get along

Published by Thriftbooks.com User , 16 years ago
It's a very good book and it can really teach you how sometimes people can be mean to you, and you can put your anger on others, but this book teaches you how that's not a good thing to do. I also think it's a very good book because there are very nice characters, and Jamaica has a very big problem and she learns how to solve it. When Jamaica puts her anger on a little 3-year-old, he accidentally steps on her sand castle, and she says not-nice things to him. But then she thinks that those things would hurt feelings; her big brother always says those things, and she doesn't like it at all, so she plays with the 3-year-old and it makes the 3-year-old feel better. Meanwhile, Jamaica's big brother Ossie is playing basketball with his friends. After he finishes, he comes over to Jamaica and the 3-year-old and is amazed at their sand castle. He asks, "Need some help?" And Jamaica says, "If you want to." So all three of them are all making the sand castle and Jamaica never minds if Ossie tags along.

Published by Thriftbooks.com User , 21 years ago
Jamaica feels sad that her older brother and friends won't let her join in their play. When she turns to play of her own, a younger child wants to join her. At first Jamaica refuses, then she remembers that she doesn't like to be excluded and includes the younger child. My 5-year-old enjoys this story, with its appealing pictures and accessible language. The author shows respect for the reader by not explicitly pointing out the similariity between the two situations, leaving it to the reader to discover the Golden Rule in practice.
Copyright © 2020 Thriftbooks.com Terms of Use | Privacy Policy | Do Not Sell My Personal Information | Accessibility Statement
ThriftBooks® and the ThriftBooks® logo are registered trademarks of Thrift Books Global, LLC