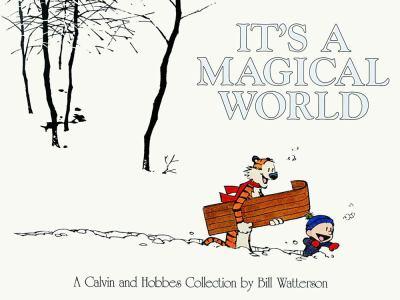 It's a Magical World: Volume 16

(Book #11 in the Calvin and Hobbes Series)

When cartoonist Bill Watterson announced that his phenomenally popular cartoon strip would be discontinued, Calvin and Hobbes fans throughout the world went into mourning. Fans have learned to survive -- despite the absence of the boy and his tiger in the daily newspaper. It's a Magical World delivers all the satisfaction of visiting its characters once more. Calvin fans will be able to see their favorite mischief maker stir it up with his furry friend,...

Published by Thriftbooks.com User , 16 years ago
From what I know this is the last C & H collection published before Watterson's adieu. That means the last page and, in particular, the last picture are the last we'll hear from Calvin and Hobbes in our lifetime. They're both absolutely beautiful and I don't mind to confess that I had tears in my eyes the moment I watched them. This book is typically exhilarating Watterson art: crazy, warm, witty, always funny and incredibly well written and designed. The strips about Calvin's snowmen are the ones that probably stand out, but it's a very tough call. A great, great farewell from my all time favourite comic strip.

The Last of the Magic

Published by Thriftbooks.com User , 18 years ago
This is the final collection of comics from CALVIN AND HOBBES, arguably my favorite comic strip of all times. Cartoonist Bill Watterson chose to retire before he drained all the magic out of his characters. While I'm disappointed, that is probably wise since this collection shows he was still at the top of his game. Calvin can make an adventure out of everything, whether it's having Susie over for an afternoon (a great day for GROSS), trying to get out of school, playing Calvinball with Rosalyn, or putting off a leaf collection project until the very last night, his antics are sure to make you laugh. The genius of the strip is that we're often laughing at ourselves. Hobbes's comments are often funny and true, and watch out for the Chewing magazine strips. They hit a little too close to home. This strip got better as it went along, and there is some classic stuff here. It's a little bitter sweet reading the last few knowing it's the end. And I still want to know what the noodles incident was. While there are some strips out there I enjoy, I still miss this great strip. If you somehow managed to miss it, pick up any book today. It's guaranteed to have you laughing in no time.

Published by Thriftbooks.com User , 19 years ago
Bill Watterson's creation of Calvin and Hobbes is for my taste the ultimate adult comic strip; six year old Calvin, his stuffed tiger Hobbes, and his extensive and witty vocabulary, can be laugh-out-loud hilarious.In this large, softcover book, you get all the usual suspects: The dreaded Miss Wormwood, Calvin's schoolteacher, who has to put up with his imaginitive but lame excuses, snowball fights with Susie, Spaceman Spiff, who gets stranded on distant planets, and of course, his stressed out parents.Other characters include two marvelous one-eyed aliens, Galaxoid and Nebular, who buy the earth from Calvin for 50 leaves, but when it snows, claim they were overcharged, and demand that Calvin bring the planet up to code, and Calvin's musings on whether there is an Evil Santa, who gives to the bad girls and boys "the dangerous, annoying, and corrupting toys your parents won't allow", and best of all, when he decides to be a Suburban Post-Modernist artist, and claims that "art isn't about ideas, it's about style".Hobbes is my favorite cartoon animal, drawn as a stuffed toy when seen from non-Calvin eyes, but a wise and playfull being in Calvin's magical world. There's a lot of love between them, and the hug on the back cover of this book says it all. Calvin and Hobbes will appeal to the rebel in us all, provide numerous laughs, and warm our hearts on cold days.

Published by Thriftbooks.com User , 23 years ago
For over a decade, Calvin and Hobbes was a part of our families. We came to know Calvin and his suave stuffed tiger, Hobbes. We shared in his divine 'love' for his mother's cooking. We got the warm fuzzies as he and Susie Derkins played out their young romance through insults and secret G.R.O.S.S. meetings. We laughed at Calvin's vivid imagination through installments of Tracer Bullet, Stupendous Man, and the incomparable Spaceman Spiff (zounds!). And we cried and smiled through tears as Calvin learned the value of life and the pricelessness of a true friend. Calvin and Hobbes encapsulates every special moment of childhood, and can melt away the hard shell of even the most jaded and bitter individual. This comic strip is a celebration of life, and while it saddens me to realize that I'll never be able to share future adventures with them, I can always go back and relive those past moments again trough wonderful collections such as this. Since this book is the final collection, you owe it to yourself to own it in hardcover form. I can't recommend this book (or any of the others) enough. If there's a child somewhere in your soul, all of these books are absolutely essential.

It's the last of this stupendous series of books by Waterson

Published by Thriftbooks.com User , 23 years ago
It is a great book and if you are a Calvin and Hobbes fan, this one will have it's own space in your heart. It own's the final comic strip of Calvin and Hobbes. I think Bill Waterson made a mistake when he quit making the strip, but it is still one of the better books in the series. As I said before, if you are a Calvin and Hobbes fan, this one will own a special part in your heart because you know it's the last one, and it ends with a great personality of Calvin that we just wish that it is possible to Calvin's own free will (not the going to school part, but his great fun and laughs between school strips.).
Trustpilot
Copyright © 2022 Thriftbooks.com Terms of Use | Privacy Policy | Do Not Sell My Personal Information | Cookie Preferences | Accessibility Statement
ThriftBooks® and the ThriftBooks® logo are registered trademarks of Thrift Books Global, LLC