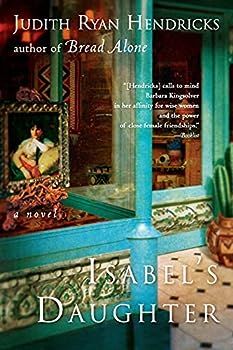 The first time I saw my mother was the night she died. The second time was at a party in Santa Fe. After a childhood spent in an institution and a series of foster homes, Avery James has trained... This description may be from another edition of this product.

Published by Thriftbooks.com User , 16 years ago
Not many writers can weave so much emotion into their passages. But Judith Hendricks does this very well. She has combined real, likeable characters, a story packed with emotion, complicated relationships, and incredibly strong, inspiring female characters. The thing that makes this book, and this author, stand out even more is that Judith Hendricks knows the power and magic of female relationships. And she is a genius at portraying these things in words. I really felt like I understood Avery James in ISABEL'S DAUGHTER, I cried for her. But even better, I loved this story of healing and perseverence and the strength that a woman gathers from within herself and from the women in her life.

Published by Thriftbooks.com User , 16 years ago
I was a little skeptical at first ... southwestern stories are usually not my chosen genre (I was thinking a little bit more "cowboys" for this one). This book is absolutely wonderful and I read it in one day ... I recommend it to anyone. I loved her work so much I ordered both her others today and can't wait for them to get here!

Published by Thriftbooks.com User , 16 years ago
Avery James was raised in a foundling home in southeast Colorado where her only real friend was the school's cook, Esperanza. After a disastrous placement in foster care and the death of Esperanza, Avery runs away and ends up with Cassie, an old curandera (herb-woman, healer, witch) in New Mexico. Because of her lonely childhood, Avery has built a wall around her heart and pushes back anyone who tries to care about her. After Cassie's death, Avery is once again set adrift and runs away from Will Cameron, the young man who is in love with her. Avery hitchhikes to Albuquerque, where she works in a diner and attends night classes at the university. On a whim, she and her roommate move to Santa Fe, where Avery finds work with a catering company. This is how she meets Paul deGraf, her mother's former lover, and begins to unravel the mystery of who her mother was, and who Avery is, was, and wants to be. I used to live in Santa Fe and found the descriptions of the town and its inhabitants spot-on. Hendricks' fluid and detailed descriptions of the food often made my mouth water. (Yum, chile rellenos)

Published by Thriftbooks.com User , 18 years ago
Judith Ryan Hendricks has scored high marks once again with ISABEL'S DAUGHTER. I loved BREAD ALONE and finished it, coincidentally, the day ISABEL'S DAUGHTER was released. While wandering through the bookstore with my son on his birthday I was delighted to find her second novel. Yes, it took me four months to get to it because of all the other unread books on my shelves, but it was worth the wait. The story is interesting and beautifully written. Ms. Hendricks' enchanting style pulls you into the story and, in this case, into New Mexico, a state that is already magical to me. Avery James, the discarded orphan, is far from perfect, but she has good reason to live a life that is disconcerting. There are many mysteries in her life which she works to unravel, leaving the orphanage and traveling south into the art world of New Mexico. For those of you who already love the Southwest, this will bring it home to you in a nostalgic and romantic way. For those of you who have never visited or lived there, you'll want to change that as soon as possible! Judith Ryan Hendricks is on my list to watch out for all future novels. She has a gift and here's one reader who hopes she uses it often and well.

Another enchanting story by Judith Hendricks

Published by Thriftbooks.com User , 18 years ago
Avery James is both cursed and charmed by the legacy of the woman who left her a foundling with only a thread (literally, you'll see) of a clue to her mother's identity. But Avery doesn't count on that (or much of anything or anyone else) as she grows herself up in the orphanage in Colorado, then on the road through New Mexico from Florales to Albuquerque and eventually to Sante Fe where her past and future converge.Hendricks beautifully renders the vistas and cuisine, art and history of New Mexico while revealing layer after layer of Avery's perceptions and blind spots, her longings and her fierce attempt not to desire anything more than whatever she can claim as of her own making. Avery blunders and blooms in fits and starts as she gradually comes to accept the mantle of her ancestors and allows herself to grow into their dreams for her.Isabel's Daughter does for Sante Fe and visual arts what Hendrick's first novel Bread Alone did for Seattle and baking. They transport the reader in the great tradition of storytelling so it's the next best thing to being there.
Trustpilot
Copyright © 2022 Thriftbooks.com Terms of Use | Privacy Policy | Do Not Sell My Personal Information | Accessibility Statement
ThriftBooks® and the ThriftBooks® logo are registered trademarks of Thrift Books Global, LLC