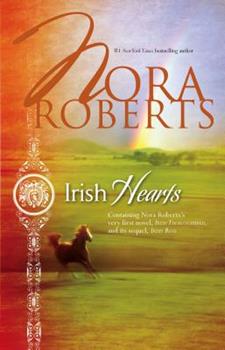 (Part of the Irish Hearts Series)

Irish Thoroughbred It was a dream come true for Irish lass Adelia Cunnane--to work with her uncle, a horse trainer at Royal Meadows, one of the most renowned stables in the world. But there was a catch, and his name was Travis Grant. He was the stable's owner, and a man as proud, as passionate, as opinionated as...herself. Irish Rose When Adelia's feisty cousin Erin McKinnon first meets Burke Logan, she's not impressed. He's a womanizing, cigar-smoking...

Published by pbryson , 1 year ago
These 2 are well written with believable characters and plots.

Published by Thriftbooks.com User , 21 years ago
This was the first book of Nora Roberts that I have ever read and I discovered it only a few months ago. It was rather ironic when I found Irish Thoroughbred was her first book. Irish Thoroughbred starts when Adelia (Dee) Cunnane comes to America after spending her life on a farm in Ireland. Her uncle, Uncle Paddy welcomes her to America and she comes to work at the same stable that he works at. Right away she impresses the stablehands with her ability to make friends with horses. When she finally meets Travis Grant who owns the stable it doesn't put her in a forunate spot ... or so she thinks. Sparks of romance fly for her and she is sure he is just amusing himself but for now his kisses are enough. Dee gets caught in a whirlwind of confusion and emotional pain. But the ending has several twists for her that she doesn't expect ... Irish Rose begins when Erin McKinnon meets her cousin who happens to be Adelia, and Adelia's husband Travis, their children, and Burke Logan steps off the plane into Ireland. Erin secretly wants more from the world than to just be in Ireland. She wants a life full of exciting adventures and is uncomfortable when Burke can see her desires so clearly when the rest cannot. She soon finds herself in America to keep Burke's account books organized. She is in much deeper than she suspects though and when things start to become more clear a few things are still hazy ... things that are most important to her. When she gets things straight will she like what she finds? What about Burke? Sparks are flying and are almost out of control. How will it end?

The Luck of the Irish!

Published by Thriftbooks.com User , 21 years ago
IRISH HEARTS is the re-issue of two of Roberts' earlier novels, including her first novel, IRISH THOROUGHBRED, along with a sequel of sorts, entitled IRISH ROSE.I found the first book to be as well written as any of her present-day books. It is evident that she was a master writer from the beginning. For those of us who love horses and the men who are involved with them, we will be right at home with these two stories, which both evolve around horse racing and especially the Kentucky Derby environs. In the first story the heroine, ADELIA CUNNANE, is an orphan moving to the U.S. to live with her uncle who is employed by the hero. The hero, TRAVIS GRANT, is also an orphan, but is, however, wealthy having inherited his money and the horse farm from his deceased parents.The second heroine, ERIN MCKINNON, comes from a large family. She is lured to the United States by a job offer from the second hero who is a "Johnny-come-lately" to the rich society he enlists in. This hero, BURKE LOGAN, hides his past afraid it would make a difference to the Irish girl he is loath to admit he loves. These were both delightful reads!

Published by Thriftbooks.com User , 21 years ago
Irish Hearts has all the love a romance novel could need... This was two books in one, Irish thoroughbred and Irish Rose. I only have one complaint, that is both stories had too many simularities. The first stroy line, Irish thoroughbred, was about a woman, Adelia, whom comes to America to be with her uncle after her aunts passes away. Adelias uncle Paddy, works on one of the finest horse ranches in the states, and takes Adelia under his wing. Almost as soon as Adelia arrives she starts falling in love with Travis Grant, the owner of the horse ranch, Royal Meadows. The romance and the way they came together was heart warming and and truly a page turner.The second book was a continuation of the the first story but this one was called Irish Rose. This one has Adelias cousin Erin McKinnon and Burke Logan added to the story line. Adelias family and neighbor Burke take a trip back to Ireland, and ends up bringing her cousin Erin home with the help of Burke needing assistance back home in the states. But same as the first story the two were in love before you could say when. Not that it made the story bad, and don't get me wrong the two stories were great and the romace was great, but they were very simular. I can say you would be missing out if you didn't read this book. And after you buy this one buy the sequel to Irish Hearts, Irish Rebel.

Some of Robert's best work

Published by Thriftbooks.com User , 21 years ago
Some of her best work. This book is definitely a mood lifter. It is charming and warm. I loved it. My favorite books of hers are the ones that are set in Ireland or have characters from Ireland they bring such fun to the story and humor. I definitely reccommend this book.

Can't Wait For the Next One!

Published by Thriftbooks.com User , 21 years ago
Irish Hearts was a great read! Both stories in this novel revolve around raising horses and racing them. The first story is about Travis and Adelia "Dee". I was hooked on this couple right after the first chapter. Dee is a feisty Irish and her temper turns Travis on even more. Needless to say this couple is hilarous! The second story is about Burke and Erin. Burke is so laid back and wants Erin so much he will do anything to have her, but he doesn't realize he has fallen in love with her. Both stories in this novel are wonderful! I don't know much about horses, and was surprised to find myself cheering for the horses at the races. I felt like I was in the stands myself! Both couples our so easy to like and you can feel yourself losing yourself in their stories. I'm looking forward now to starting the next novel to go with this book. It is called Irish Rebel and it picks up with Travis and Dee's daughter, Keeley. Hope all enjoys Irish Hearts as much as I did! 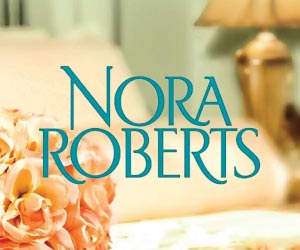 A legend in the romance genre, Nora Roberts has published so many bestselling books that you'll probably never run out! Her vast bibliography utilizes a variety of styles, settings, and genres, so you'll also never get bored. Get to know a little more about the legendary author and her prolific titles.