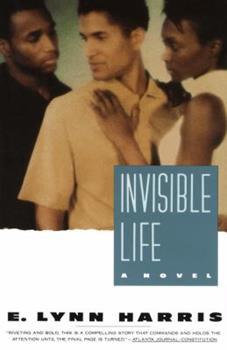 (Book #1 in the Invisible Life Series)

A remarkable novel by a young, gay, black writer who has fashioned a deeply moving and compelling coming-of-age story out of the controversial issues of bisexuality and AIDS. The book tells the story of a young black man who, following a chance meeting with a black athletics jock, discovers that he is attracted to both men and women. Moving from his home in the Deep South to New York, he soon finds that he is not the only black man to be confused...

Published by Thriftbooks.com User , 2 years ago
I loved it from beginning to end! A must read for all E. Lynn Harris fans.

The First of Many Blessings

Published by Thriftbooks.com User , 17 years ago
This is the first book of E. Lynn Haris' Invisble Life series. They are all wonderful. You will fall in love with most and hate some of the characters but that is what makes this series so good. I've purchased everyone of his books except for his memoir which I've read. All but "If This World Were Mine" and "And This Two shall Pass" are part of the series, but Mr. Basil with his fine behind is in every one. I've read this book and all the other twice that is just how good this is. Buy or read them all. You won't be disapointed.

Published by Thriftbooks.com User , 21 years ago
I though Eric Jerome Dickey was my favorite author of all times but, I think he has met his match. I went to the store to buy some new books and picked up this new book by E. Lynn Harris "Not a day goes by". I read it and it was one of the best books I have ever read, that was until someone from my job told me that he had four other books prior to this one. So far I have read Invisible Life and my favorite of all times ever "Just As I Am." If anyone has had someone that they love died of AIDS, this book will have you crying uncontrollably when a certain person dies in the book from AIDS. I am kind of feel bad to say this but, I did not look or treat homosexuals, lesbians and bisexual people in the way that they should be treated, in other words just like straight people. I also used the words queer, fag the list goes on and on. I know now how stupid I must have appeared to some people. After reading this book, I now know that some people that I hang around everyday could be bisexual and the things that I said probably have hurt them. So to everyone that I have disrespected, I AM TRULY SORRY, and that includes my uncle who has passed away. Even though I would never said anything bad about him but, disrespecting his sexuality through other people is just as bad. I am sorry that it took such a good book for me to learn how ignorant that I have been!

EYE OPENING and POWERFUL. Looking for the movie

Published by Thriftbooks.com User , 21 years ago
Invisible Life was truly an eye opening and bold story. I read this book in a day! I just couldn't put it down! From page one I was pulled in and left wanting more. This story introduced us to characters such as Raymond, Sela, Basil, Kelvin, Kyle, Nicole and Candance to name a few. The choices and paths they choose to take and how they affect the ones they love. The story also shows how secrets infest and destroy relationships. It's a story that sheds light on gay men and the lifestyle they lead. You're able to get a better understanding of these men and their world. This book showed me that regardless of our sexual desires, we're all human with needs, fears and desires. I know men who've struggled with their sexuality and what's "politically correct", according to society. I'm glad E.Lynn Harris gave a voice to this world and showed us the good, the bad and ugly. This is thought provoking novel your's sure to enjoy. Thanks E.Lynn for a wonderful book on a beauitful morning.

Published by Thriftbooks.com User , 21 years ago
These are the words that I would use to describe this novel. This book opens the invisible door of the invisible life to let the reader have a peek and see what is on the other side. I have known several gay people in my life and though I realized that things are hard for them, I never realized how complicated life can be for gay males. I never realized that there are so many undercover African-American gay men. From Harris' descriptions, some of these characters can be your brother, son, father, boyfriend, or husband and you would never even know it. For those unfamiliar with the Invisible Life, Harris' novel is a creative and colorful eye-opener. When you finish a good piece of literary material you are supposed to walk away with something. If the novel doesn't change you or touch part of your soul that you never knew existed - it isn't a good novel. This one is. This novel blends its cocoa colored characters, whose conflicting and powerful emotions keep the reader racing to finish pages, and the very real and painful lifestyle of the black male in America.If you have never read any books about homosexuality or bisexuality, read this one. It will inform you and keep you entertained. The bible does prohibit homosexuality , but it also says love thy neighbor as thyself. The best way to begin to love someone is to understand them. If you want to really grow intellectually and spritually, read this book. It is one of the greats.

Published by Thriftbooks.com User , 22 years ago
If you have ever been curious about the life of a gay African American man, this book, and the rest of E. Lynn Harris' books, will enlighten you. Aside from the description of this book as the "Literary equivalent of cotton-candy" and the use of "homophobic" language, as one reader described, Mr. Harris' books give you a wonderful look at the lives of men who could be your brother, cousin, uncle or friend. I grew up with a gay brother, with whom I had never discussed his sexuality (although it was never a secret). I grew up knowing his gay friends, caucasion and African American, and I have never met a more loving and caring group of people. They are just like you and me, but for their sexual orientation. I would like to thank Mr. Harris for humanizing the homosexual population, in a way that no one has before. I discussed this book with my brother, just months before he lost his battle with AIDS. He told me how he was able to identify with some of the characters, as they resembled him and many of his friends. It was the only time that I ever discussed homosexuality with my brother.Thank you Mr. Harris, for opening the door for that discussion. It is a discussion I will cherish for the rest of my life, as I will your books. Your books give me a chance to see what life must have been like through my brother's eyes. Please keep telling your stories!!
Copyright © 2020 Thriftbooks.com Terms of Use | Privacy Policy | Do Not Sell My Personal Information | Accessibility Statement
ThriftBooks® and the ThriftBooks® logo are registered trademarks of Thrift Books Global, LLC