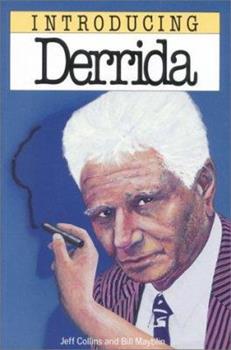 (Part of the Graphic Guides Series)

by Jeff Collins and Bill Mayblin

Jacques Derrida has undermined the accepted rules of philosophy, rejected its methods and concepts, broken its procedural limits and contaminated philosophy with literary and other kinds of writing. Derrida's philosophy is an initially puzzling array of oblique, deviant and yet rigorous tactics for destabilizing texts, meanings and identities. Deconstruction, as these strategies have been called, has been reviled as a politically pernicioius nihilism...

a good starting point; leaves you wanting to read more

Published by Thriftbooks.com User , 13 years ago
Introducing Derrida presents the attempts by Derrida to undermine what he viewed as the foundations of Western Philosophy, namely the system of binary oppositions and metaphysics. The system of binary oppositions results in everything in western philosophy boiling down to one of two opposites. For example there is only good or evil. There is only alive or dead. There is only love or hate. In his effort to undermine this system, Derrida introduces "undecidables" which are aspects of the world that do not fit into the system of binary oppositions. For example, the frame of a painting is neither a part of the painting nor a part of the exterior of the painting so it is an undecidable. Metaphysics is the study of what lies beyond the empirically knowable world. Derrida spent his life attempting to derail both. In the process of doing so he introduces "deconstructionism". This is where the book falls down for me. After reading through this section many times I still do not understand deconstructionism very well. I think the authors' approach of representing Derrida's work at a very high level works against them here. I would have liked a more detailed explanation of deconstructionism. I recommend this book with the caveat that you may find yourself needing to read more afterward. In a way though, the purpose of Totem books is to make you interested in doing just that!

Published by Thriftbooks.com User , 14 years ago
Derrida is quite an unsettling thinker. It would seem the easiest to characterize him as a philosopher, a literary criticist or, even perhaps an artist. He wants you to be unable to decide pretty much about all the certainties you have. Language is uncertain; art is uncertain. This is accomplished through a series of movements in thought, a serious disturbance of your premises. He manages to do this superbly. He has studied philosophers, painters and writers to further inquire about their premises and, by making them explicit, he has been able to break them. He will ask you to identify two constant directives in his work: 1) He wants to render certainties and premises weak, no longer absolute. 2) He goes about this like a virus, in the sense that a virus is neither a proper living organism nor a completely dead one. He wants to be pervasive and fatal, and be able to cross boundaries constantly. He proposed something called deconstruction which can be used as a noun, a verb, an adjective, a concept, a tool, a method, a mode of inquiry; but he would be the first to tell you that it is not exclusively one of those but, perhaps, all of them. It really depends. What do you accomplish with it? To nullify boundaries by making them explicit, to extend semantical domains by inhibiting its predefined -comfortable- ontologies. I had to read it twice, because the first time I was uncertain if I had achieved full control and understanding of the notions. Read it carefully; it is a great starting point into his rather more complex works. The editors have made an excellent job in keeping consistency and congruence between the graphics in each page and the concepts therein mentioned; they were not gratuituous and they were not simplistic. In the specific case of Derrida, often times a helpful, concrete analogy is needed, even if only a graphic one. As a previous reviewer mentioned, you will derive the greatest benefit from his ideas by getting acquainted first with Phenomenology and Structuralism and, to some extent, with schools of thought previous to these ones, as he constantly makes reference to them in his works. Overall, an efficient and simple introduction to a fascinating topic.

A good glimpse at Derrida

Published by Thriftbooks.com User , 16 years ago
There seems to be two kinds of people who read these books: those who see the word "INTRODUCING" in the title, and those who don't. The latter group seems to think that the books in this series are titled "THE COMPLETE, UNABRIDGED WORKS OF (insert philosopher's name)". They miss the point that these books are meant to give average readers a brief glimpse of the subject matter. The reader can then go on to read the ACTUAL writings of the philosophers. I think these books (and DERRIDA in particular) are really great, because they are getting more people interested in philosophy. That said, I found that I got more out of this book after familiarizing myself with other philosophers, since Derrida is a post-modern philosopher, reffering to work done before him. So if you are considering this as your first book in the series, I would suggest familiarizing yourself with Western philosophy over the past 200 years (Kant, German Idealism, Existentialism, Structuralism) and you'll take much more away from Derrida's work.

Honk if you Hate Metaphysics!

Published by Thriftbooks.com User , 18 years ago
I can't believe this book is not more popular! I loved it. It has pictures on every page which really helps keep your attention, at least for the first two-thirds of this 171-page illustrated book. This is difficult stuff, and the authors have done a very good job of introducing, simplifying, and illustrating Jacques Derrida's style and concepts. If you've had some exposure to either the Metaphysicians, Nietzsche, Heidigger or the Existentialists, it'll help. But this straight-forward format makes the new ideas extremely easy to understand. It gave me exactly what I wanted: Information about Derrida's roots, in Structuralism and Phenomenology, plus a springboard to allow me to read Derrida's books without any fear of misunderstanding or misinterpreting his ideas.After a brief introduction to the core Viruses: Undecidability and Derailed Communication, the authors first use the concept of the Zombie in Hollywood movies to illustrate Derrida's concept of Undecidability, then Plato's Phaedrus to illustrate the concepts of Supplement and Difference which explain the magic, which metaphysics uses to disappear those nasty opposites! Phonocentrism and Logocentrism follow and whoopee! You're already starting to recognize a metaphysical concept coming from halfway down the block if you see one!Seriously, the book is really THAT good if you like reading Philosophy and you've wanted to learn about Derrida's ideas. It pays attention to all of the important critical philosophers that preceded him, Hume, for example (p.45). After page 100, however, you realize you are reading about individual papers and speeches of his, which are a little bit like seeing advertisements and reading biography rather than seeing parts of the whole picture. You might want to skip through this section to whatever you're interested in. The problem is that Derrida happens to be a bit of a Rennaisance man, and the fact that he has an interest in architecture, or feminism, or people with disabilities is somewhat less interesting for me than what he is doing in Philosophy.
Copyright © 2022 Thriftbooks.com Terms of Use | Privacy Policy | Do Not Sell My Personal Information | Accessibility Statement
ThriftBooks® and the ThriftBooks® logo are registered trademarks of Thrift Books Global, LLC