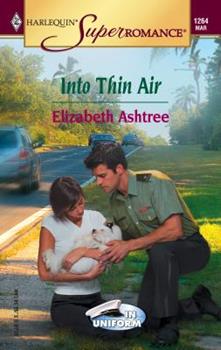 Into Thin Air: In Uniform (Harlequin Superromance No. 1264)

(Book #6 in the In Uniform Series)

Into Thin Air by Elizabeth Ashtree released on Mar 08, 2005 is available now for purchase.

Published by Thriftbooks.com User , 15 years ago
CID Major Julian Fordham is brother to Nathan,of A CAPTAIN'S HONOR, has commitment issues and fears losing control of his emotions. [father issues]. Ah, but Captain Kelsey O'Roark pushes him unintentionaly toward losing control of his feelings. [emotional issues]. She is spooked when a soldier falls to his death in her warehouse on base. Her first thought is to find the Major and tell him the story which she has no proof of the reality of it. [trust issues]. Major Fordham is investigating, on the QT, the thefts that have been happening and does not reveal to his friend, Major Andrew Mitchum,MP, the story Captain O'Roark has told him. Then we are intoduced to the "Wolf" who is apparently helping with the thefts. Oh, Oh, Kelsey's sister, Shannon shows up for a visit - loses her fluff of a dog, Bella, who leads them on a merry chase. Shannon ends up becoming friendly with Ken Steinhauser of the K-9 division and she ends up taking a job helping with the dogs. There are some tense moments, some fun moments but once again how can people with so many issues hop into bed with one another? It is incomprehensible. They act like immature idiots instead of responsible adults. [commitment issues]. Ah well, still a good read - Will Recommend --m - not really a keeper.

Published by Thriftbooks.com User , 16 years ago
The G3 Logistics officer Captain Kelsey O'Roarke is inside an isolated warehouse on Fort Belvoir when she hears strange noises from the machinery. She investigates only to find a soldier where he should not be. As she goes to help him down, a shot is fired; the soldier falls thirty feet to the ground; his blood is everywhere. Kelsey is knocked unconscious with a blow to the head. Later that evening a bewildered Kelsey explains to Criminal Investigation Division Major Julian Fordham what happened, but no corpse or other evidence is at the crime scene. Last year Kelsey and Julian dated; the kisses were incredible, but also carried a forever stipulation that scared the CID cop away. Kelsey knows she still trusts him with her heart and soul let alone her life, so he reluctantly agrees to investigate though he expects to find nothing out of the ordinary. Neither expected what they find which places their lives in danger from killers and their hearts from one another. INTO THIN AIR is an intriguing military police romantic mystery in which readers know Kelsey witnessed a murder, but Julian firmly believes she banged her head and imagined the whole thing. The story line is fast-paced when it concentrates on the present; when the plot looks back at last year's relationship fiasco it seems out of step because Julian who has all the doubts resolves them too easily. Still following the lead couple tries to solve the military murder mystery provides a fine R & R for readers. Harriet Klausner
Copyright © 2020 Thriftbooks.com Terms of Use | Privacy Policy | Do Not Sell My Personal Information | Accessibility Statement
ThriftBooks® and the ThriftBooks® logo are registered trademarks of Thrift Books Global, LLC