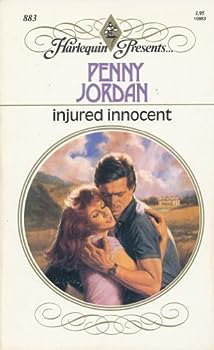 (Part of the Marriage of Convenience Series)

Injured Innocent by Penny Jordan released on Mar 25, 1986 is available now for purchase.

Published by Thriftbooks.com User , 20 years ago
This is the best book I've read written by Penny Jordan. The story is about a woman named Lissa who was very insecure about herself because she can never be Amanda. Amanda is her blonde sister. Her parents loved Amanda more than Lissa. There was an incident that happened when she was injured when she was 15 or 16. Her best friend invited her to go to her friends house to party. Lissa's parents told her "no" and added, "Why can't you be hang out with people like Amanda's friend?" She was really hurt because her parents only wanted her to be like Amanda--who hangs out with rich kids. Lissa sneaked out and came to the party. Everyone got drunk. And Lissa was lead by her crush and they lazily kissed--but nothing happened. Suddenly her father went in the room and found out. Joel--who was soon to be her brother in law was there to watch her embrassement. Her parents sent her to a boarding school. Now that Lissa is all grown up, she can't respond to any man. Kissing makes her sick, etc. She always sees Joels biting contempt. Amanda and her husband died in the airplace crash. Joel and Lissa are the guardian of the two kids. Joel has been in love with Lissa all along even before when they were young. Now, Joel suggested they should marry each other or else he'd marry another woman and get custody to the girls. Lissa accepted thinking that it will be a revenge that Lissa won't be able to respond to Joel physically. But she was wrong. The love story was great. It really hurt my heart. Lissa would always show her bad side in herself in purpose, blaming Joel, but really she was falling in love with Him. Read the book! My review doesn't describe quarter of how beautiful the romance is. I suggest you read this book, it is the most heart aching story ever!!
Copyright © 2020 Thriftbooks.com Terms of Use | Privacy Policy | Do Not Sell My Personal Information | Accessibility Statement
ThriftBooks® and the ThriftBooks® logo are registered trademarks of Thrift Books Global, LLC