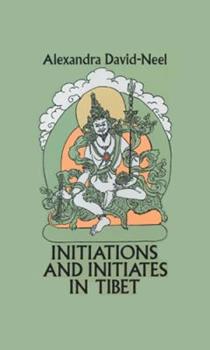 Initiations and Initiates in Tibet

Nestled amid the high peaks and eternal snows of the Himalayas and other mountain ranges, Tibet is home to a centuries-old Buddhist tradition, rich in mystic rites and rituals aimed at helping adherents achieve spiritual bliss. In this fascinating volume, a noted authority delves into the nature and sources of Tibetan mysticism, providing readers with a wealth of information regarding Lamaic rites of initiation and the teachings given to initiates,...

An excellent survey of Tibetan beliefs and practices

Published by Thriftbooks.com User , 14 years ago
The author is forthright about the cultural differences between the west and Tibet and for that matter recognizes that no words can really even begin to express the actual experiences she had in Tibet. That said, she does an excellent job of explaining the spiritual culture of Tibet and the practices that involve initiation. This is a must read for anyone who wants to get an idea of the Tibet of yesterday and the Tibet that is currently occupied by china

Notes on Tibetan Buddhism of Generations Past

Published by Thriftbooks.com User , 16 years ago
This book is a description of the practices of Tibetan Buddhism found by David-Neel during her tenure in Tibet during the early part of the Twentieth Century. David-Neel had spent many years living in Tibet and studying Buddhism before she wrote this book, even adopting a Tibet son, Lama Yongden. This book describes the main beliefs and ceremonies of Tibetan Buddhism as David-Neel observed them at that time. The first sentence of the text reminds us that her task is practically unachievable "To present to Westerners a perfectly clear and complete idea of the mysticism of the Tibetans is practically impossible." David-Neel was remarkably cognizant of the immensity of the cultural differences that she was trying to bridge, far more so that many other travel writers of her era. Her fluency in the language and spiritual commitment helped her gain a foothold in the mysterious city of Lhasa, closed at that time to all foreigners-except her. In this book, David-Neel takes on a variety of topics, including: Tibetan mysticism, kinds of initiations and their meanings, daily spiritual exercises, a historical overview of the Dalai Lamas, types of Buddhism, morality in Tibetan Buddhism, meditation and the cultivation of attention, and the Tibetan intelligentsia. To capture some of the essence of Tibetan mystics, David-Neel terms them "spiritual sportsmen," referring to the boldness of the Tibetan mystics and "their singular impatient desire to measure their strength against spiritual obstacles or occult foes." As she describes some of the types of initiation, these ideas become more clear. For example, in one initiation, the initiates demonstrate their determination to exercise mind over matter as they sit naked for hours in the cold and swallow a four-inch long burning candle. Later in the book, she stresses that the initiation is "not intended to communicate knowledge, but rather to transmit the power to do some physical or mental act." The workings of the subconscious mind are extremely important to these mystics, and David-Neel tells us how the mystics use the study of sleep and dreams to determine intent, where it can be studied free from the constraints of conscious action. In their beliefs, a person who dreams he murdered someone is guilty of murder because the dream shows his or her true intent. In contrast, a person can actually kill someone and not be guilty of murder, if he or she had no personal motive in the affair. It is intent, and solely intent, upon which the system of morality is based. This book is not intended to be a guide or introduction to the Buddhist faith, although it does include material summarizing some sacred Buddhist texts. Buddhists are very diverse in their beliefs, and while a number of the statements David-Neel includes are familiar to all Buddhists, some of the practices described here would be abhorrent to many, and may be quite different in modern practice, even in Tibet. As a historical document, h

Published by Thriftbooks.com User , 22 years ago
David-Neel, Alexandra. Possibly the first European woman to do the three year+ retreat, died at the age of 102 in 1969. Her Initiates and Initiations, published in 1931 and translated from the original French Initiations Lamaiques is one of the earliest attempts to explain honestly to the much-obfuscated Western mind (viz. the term lamaique), the nature of the ongoing process that is the method employed by Vajrayana teachers. She understood how less educated Tibetans viewed certain teachings compared with the perceptions of the intellectuals. The chapter on the intelligentsia exists only in the English version, by the way.Her knowledge of the other Buddhist traditions and of the history of early Buddhism enabled her to attempt to trace the evolution of concepts such as that of Nirvana, for example. She clearly exposed the difference in interpretation by Buddhists of terms that may have had their origins in Hinduism. Her knowledge of Sanskrit and Tibetan enabled her to discuss the different connotations that an expression has even though it seems to refer to the same idea. She had a good grasp of the history of the Kagyu and the other lineages, and showed a surprisingly sophisticated view of the history of Tibet and its relations with its neighbours. Interesting, too, or should I say again, were her observations on the position of the young Dalai Lama in those early days. This edition was printed in 1973 by Ryder in London.
Copyright © 2020 Thriftbooks.com Terms of Use | Privacy Policy | Do Not Sell My Personal Information | Accessibility Statement
ThriftBooks® and the ThriftBooks® logo are registered trademarks of Thrift Books Global, LLC