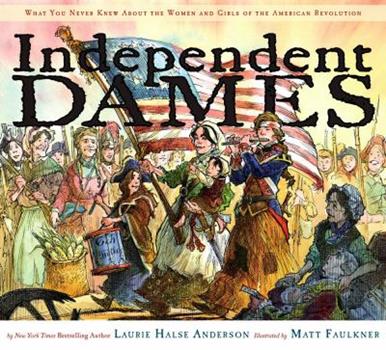 Independent Dames: What You Never Knew about the Women and Girls of the American Revolution

Listen up You've all heard about the great men who led and fought during the American Revolution; but did you know that the guys only make up part of the story? What about the women? The girls? The dames? Didn't they play a part? Of course they did, and with page after page of superbly researched information and thoughtfully detailed illustrations, acclaimed novelist and picture-book author Laurie Halse Anderson and charismatic illustrator Matt Faulkner...

Published by Thriftbooks.com User , 11 years ago
Unlike most historical accounts of the American Revolution, Independent Dames focuses on the critical roles played by countless women-some prominent, most not. As anger in the colonies over British taxes and authoritarian rule spread, women exerted their power as consumers by boycotting British goods such as tea and cloth. Groups calling themselves "Daughers of Liberty" sewed clothing made from homespun cloth, supported American businesses, and even harassed shopkeepers that sold British imports. Women also worked actively as spies before and during the war, using a variety of clever means to disguise themselves and the information they carried. While banned from joining the army, a number of women disguised themselves as men so they could engage in active combat, and even more worked as camp followers to perform the caring labor that supported the army. Women fundraisers collected thousands of dollars to support the war effort, and women took on a variety of non-traditional occupations vacated by men-including printers, carpenters, and shopkeepers-to keep the economy going. Thoroughly researched and illustrated with a graphic-novel approach, this unique book makes a strong contribution by busting a number of high-profile myths and setting the record straight on the multiple ways in which women and girls shaped the course of history during the American Revolution. The country owes much to their powerful acts as consumers, producers, spies, soldiers, fundraisers, and workers.

Women with an Attitude

Published by Thriftbooks.com User , 12 years ago
First of all, on the very first spread there's a little glossary of `Who's Who' which I think will be extremely helpful for youngsters (heck, even for adults!). Some terms include: Militia, Patriots, Loyalists and Parliament. A timeline follows which goes throughout the rest of the book. I love the continuity of facts in the timeline which can be read at the same time as the "fun" part of the book, or separately. It really depends on the reader and how much they want to know! I read them at the same time, which was interesting, but I think that the intended audience of this one might enjoy the illustrated text first, then go back and read the timeline (or vice versa) as you lose a bit of the continuity of the story going back and forth. Most people probably think women didn't help all that much during the Revolution, or do things other than sew and nurse. They'd probably be quite surprised to know that there were women who dressed as men to become soldiers and that many were spies! They also took over family farms or even became blacksmiths if their husbands had died! Generally speaking, I like the illustrations, but there's something about them that just bothers me a little bit. While I think they're fun and probably attractive to children, the added dialogue boxes don't always work for me, nor do the faces of the women. They aren't caricatures by any means, but that's what they remind me of. Granted, finding out what some of these women looked like may have proved difficult, but I think because of the seriousness of their contributions they could have been treated a little more respectfully. That's not to say the artists' intentions were to disrespect them, I think its far from it, I just don't always like the humor and find some of the dialogue difficult to follow, like on pages 32-33. Maybe its just me being picky, but I'm pretty sure the kids are going to love it. At the end of the illustrated selection, there four pages of additional information! There are three sections titled: "Even More Dames," "Fact or Fiction?," and "The Other Americans." Honestly, the entire book could have read like this for me, even without the illustrations! I found it a lot more direct, but then you lose some of the `fun' of the text and illustrations working (or trying to) together. There are even notes from the author and the illustrator to give you a little background on just what they did for this seemingly quite time-consuming project! As with all works of nonfiction, I love me a good bibliography, and this one is no disappointment, I can tell you! If my counting is correct, there are 45 (FORTY-FIVE!) additional books listed, with ones that are of particular interest to adults starred! There are even 5 web resources! And an index! While I really enjoyed the book itself, the last 7 pages really outdo themselves for me!
Copyright © 2020 Thriftbooks.com Terms of Use | Privacy Policy | Do Not Sell My Personal Information | Accessibility Statement
ThriftBooks® and the ThriftBooks® logo are registered trademarks of Thrift Books Global, LLC