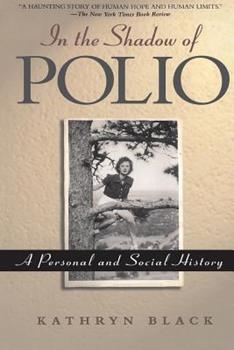 In the Shadow of Polio: A Personal and Social History

In 1954 Kathryn Black's mother became one of the millions of people worldwide stricken with polio. A year later, as the Salk vaccine became widely available, the nation heaved a collective sigh of relief, and promptly buried its memories along with its dead. In the Shadow of Polio offers a penetrating look at this intense and significant period in American history. Black explores the lethal progression of her mother's illness and its devastating emotional...

Published by Thriftbooks.com User , 15 years ago
Kathryn Black's journey to understand her mother's struggle with polio is well written and poignant--a definite contribution to appreciating the human condition. This book is worth every penny.

Published by Thriftbooks.com User , 22 years ago
As a daughter of a polio survivor, I found this book to be an excellent resourse. the excellent research and doucumentation of a social and scientific phenomena of this century.

Published by Thriftbooks.com User , 23 years ago
This book is incredible! I was born in 1959 and received the polio vaccine as an infant. I am now a pediatrician grateful to have never seen a case of polio. This profound and moving book does an excellent job of showing how a devastating disease can ravage family. It is also a fascinating history of polio in America. Although this book is excellent for anyone interested in the impact of polio, I think it also offers great insights for healthcare professionals as well. What a shame it is that polio surivors have been largely forgotten and their ongoing problems ignored.

Brought back many memories. It paralleled my childhood

Published by Thriftbooks.com User , 23 years ago
I was eleven when my mother contacted both bulbar and spinal polio in July of 1954. She lived for seventeen years. She was confined to a rocking bed and a chest respirator. She eventually died at home while confined to an iron lung. My brother age 12 and Sister age 8 also contacted very mild forms of polio. My father and I did not show any symptoms of the disease. For the first month of her hospitalization we (children) lived with my father parents on a farm. When school started we were brought home and were under the care of a housekeeper and neighbors. My father traveled to Ann Arbor almost every day to be with her. Unlike Kathryn's father, our father never abandoned us children; nor did he ever give up on our mother. As a summery comment I would have to say that he truly lived up to his marriage vows. Although we were older when out mother contacted the disease, out lives pretty much paralleled that of Kathryn and her brother. Out mother spent almost two years! in the "Polio Ward, 9th floor" of the University of Michigan Hospital in Ann Arbor. I don't remember exactly when she came home to stay, but she did get home on some weekends. I remember that she was allowed to come home for Christmas 1954. It was for the day and she had quite a contingent of caregivers and equipment. When she did finally come home to stay, we were encouraged to lay down with her in the rocking bed. Boys being boys, my brother and I didn't do that to often, but my sister was a regular rocker. We did assist a lot with her care and physical therapy. We spent many weekends visiting and making friends with polio victims; I often wonder what ever became of them. Some I know to be deceased. (I corresponded with one young lady while I did my tour of service in Germany. I saw her once after I got out). I often accompanied my father when he took my mother on outings. His station wagon was outfitted with a porta-lift on the roof (plus he had a portable porta-l! ift on casters) for getting her in and out of the car and i! nto a wheel chair. The station wagon was also equipped to carry her on a stretcher. On vivid memory I have is that of my father always having to drive around to find a spot with at least two parking spaces so we would have room to unload her. She usually traveled in the front passenger seat. This of course was in the days before there were handicapped parking. To this day it annoys me greatly to see some one illegally parked in a handicapped parking place. I remember that my mother had the best of care at Ann Arbor and she had a "favorite" nurse. Her name was Doris Courtier; she very often would come home with my mother on weekends to take care of her. After my mother left the hospital for good, they continued to correspond and Doris came on weekends to visit quite frequently. She was almost like a sister to my mother and an aunt to us children. My father continued to work his normal schedule and take care of my mother evenings and throu

As a 1953 Polio survivor, it brought back memories for me!

Published by Thriftbooks.com User , 23 years ago
Kathryn lost her mother to Polio when she was 4, then her dad deserted her and her brother, and her grandparents wouldn't talk about it. Loss is experienced by many of us in our life, but when you feel down, try walking in another person's shoes. I hope the writing of this book was therapeutic for Kathyrn, as we have to face the past in order to get on with our lives. If you lived through the Polio Epidemics of the past, then you will know the time Kathryn is speaking about. And, if you only know polio as a vaccine, then this book will give you insight into what a traumatic time it was for families. This is no romance novel, but it is food for the soul. I enjoyed the chance to read it, and will add it to my library! Jann, polio survivor, 1953
Copyright © 2022 Thriftbooks.com Terms of Use | Privacy Policy | Do Not Sell My Personal Information | Accessibility Statement
ThriftBooks® and the ThriftBooks® logo are registered trademarks of Thrift Books Global, LLC