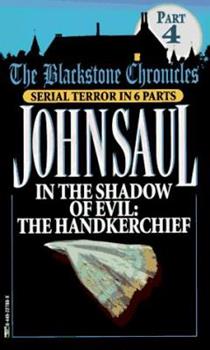 In the Shadow of Evil: The Handkerchief (Blackstone Chronicles)

(Book #4 in the Blackstone Chronicles Series)

While digging through his attic, Oliver Metcalf discovers a handkerchief with a beautifully embroidered R in one corner and gives it to Rebecca, but this handkerchief has a terrifying history and is about to take part in another nightmare, in the fourth of six-part serial. Original.

"You are about to find out who runs this place, and it isn't you."

Published by Thriftbooks.com User , 16 years ago
In this six-volume series set in Blackstone, New Hampshire, a "dark figure" has been drawn back to the long-abandoned Blackstone Asylum, which is being developed into a shopping mall. Having found the trove of personal objects which once belonged to residents of the Asylum, the "dark figure" begins to wreak vengeance by distributing them throughout the town, each "gift" resulting in horror. Here in Volume 4, John Saul once again uses Rebecca Morrison, the slightly handicapped survivor of a terrible accident which killed her parents, as the unwitting instrument of the horror which follows. (No spoilers.) When Oliver Metcalf, editor of the local newspaper, searches through some old records in his attic, stored there because his father was the superintendent of the Asylum fifty years ago, he finds a beautiful handkerchief in the files. Since it has the letter "R" on it, he decides to give it to Rebecca, her first gift in a long time. When Germaine Wagner, the woman with whom Rebecca lives, appropriates it and gives it to her demanding, elderly mother, the stage is set for another tale of horror. Once again, Saul begins the story by introducing a scene of torture in the Asylum. This time, however, he provides the name of one of the sadistic employees, making the action in this tale far more satisfying than in earlier ones because the developing horror seems directed and not simply random. As in previous novels, Oliver Metcalf is the victim of blinding headaches, fainting spells, and visions of horror related to the Asylum, and his own background, involving the mysterious death of his twin sister at the age of four, is introduced, though he has no memory of crucial events. As the town begins to suspect that the "suicides" featured in previous novels may be connected to the Asylum, the series tension builds, not because of the gory tales but because the reasons for the horror and the choice of specific victims remain unclear. One wonders who is the "dark figure" and what has made him return--and who will be the next victim, and why. This novel is the turning point in the series. The "dark figure" hints that he is beginning to recall events and a character disappears, though there is no reason to suspect that foul play has occurred. Though Saul develops the suspense connecting the novels slowly, it is clear that he has a grand finale planned. n Mary Whipple

Part 4 in The Blackstone Chronicles

Published by Thriftbooks.com User , 17 years ago
Three suicides have occurred so far in The Blackstone Chronicles, leading up to a possible fourth--or more (you'll just have to read it to find out)--in "In the Shadow of Evil: The Handkerchief." After Rebecca Morrison's aunt died in the previous book, "Ashes to Ashes: The Dragon's Flame" (#3), she's left in the care of her demanding employer, Germaine Wagner, and her even more demanding, wheelchair-bound mother. When Oliver Metcalf, a newspaper editor who has feelings for Rebecca, gives her a present--an 'R'-initialed handkerchief--something horrible begins to happen in the Wagner home. The climax, not to sound morbid, is one of my favorite death endings among the six parts; and the story itself ends on quite a cliffhanger for Rebecca. It'll certainly have readers eager to read the next part: "Day of Reckoning: The Stereoscope" (#5).

Published by Thriftbooks.com User , 21 years ago
This is the point in the Chronicles when the town of Blackstone is no longer a normal New England town. The citizens are beginning to worry, and I can clearly see the plot thickening and the climax beginning in this book. This is a good thing after reading the three extremely repititive tales that came before this one. This installment easily proves that the next chronicle will be more suspenseful than the last.

Published by Thriftbooks.com User , 23 years ago
What fun this series is. This book, though similar in structure to the earlier ones, is different enough to keep me happily reading. A quick read where I'm totally into it!

Published by Thriftbooks.com User , 24 years ago
John Saul's The Blackstone Chronicles keep getting better and better. Part 4, In The Shadow of Evil: The Handkerchief was great. I would highly recommend this series to anyone who loves a good mystery. I can't wait for Part 5
Copyright © 2022 Thriftbooks.com Terms of Use | Privacy Policy | Do Not Sell My Personal Information | Accessibility Statement
ThriftBooks® and the ThriftBooks® logo are registered trademarks of Thrift Books Global, LLC