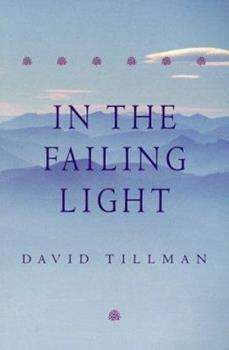 In the Failing Light: A Memoir

A beautifully told memoir by a husband who learns on his third wedding anniversary that his wife has advanced breast cancer. Doctors give her just months to live, which stretches to seven years. She's... This description may be from another edition of this product.

From the Boston Globe, MY BACK PAGES, By Katherine A. Powers

Published by Thriftbooks.com User , 22 years ago
11/21/99 - Montaigne was prompted to write his great work by the death of his best friend, the only man with whom he felt he could truly commune. Indeed, the death of someone close is a great prompter of memoirs as a way of filling the silence. ''In the Failing Light'' by David Tillman (Creative Arts Book Company, $16.95, paperback) is a husband's memoir of his wife's battle with metastatic breast cancer, diagnosed at an advanced stage when their only child was an infant. Though expected to die within months, she in fact survived for more than six years. Tillman's memoir of this time is filled with justifiable outrage at a few high-handed doctors, a ruthlessly close-fisted insurance company, and a couple of other officious bodies. But for all this, the book is a sweet and melancholy tale, bracingly lacking in self-pity. Tillman invests the life that goes on around the suffering family with that poignancy that ordinary activity acquires when ordinariness is gone forever. Waiting in a hospital for his wife to emerge from an operation, he observes the cleaning staff: ''The women, their mops abandoned by the doorway, spoke Russian amongst themselves while the little Puerto Rican man stood silent, leaning on his broom, smiling to himself as he watched their large rumps.'' It is Tillman's mixing of humor and sadness that elevates his memoir above the pedestrian.

Published by Thriftbooks.com User , 22 years ago
Dear readers, I apologize for the bogus review I entered below as "A reader from Ohio." I've been in a jealous rage because of Mr. Tilman's success and let my anger get the best of me. Below is the review that I originally wrote:David, this was a beautifully written and heart-wrenching book, and I applaud you for your usual excellent writing. I would be happy to be write a short review of this book, and am honored to have been asked."Dave Tillman is that rare writer whose work has the power of universality. His In the Failing Light touches a consciousness shared by all, for everyone has experienced the loss of someone beloved. Beautifully-written and bittersweet, the author - as with all his work - reminds us that even when day slips closer to night, and the light fails, life is to be savored and lived to the fullest."

Published by Thriftbooks.com User , 22 years ago
Eloquent and heartbreaking, this is an account of the toll cancer took on the lives of the author and his wife, who recently died of the disease. Diagnosed with stage IV breast cancer shortly after the birth of her first child, Tillman's wife (whom the author does not name) spent the next six years trying every conceivable treatment, including a bone marrow transplant, to prolong her life. Although there have been other memoirs by a surviving spouse, what distinguishes this one is Tillman's candid emphasis on how he tried to deny the harsh reality of the disease that was killing his wife. Tillman refused to admit that she would not survive by repeating what would become his mantra, "You'll live to be a hundred," although his wife had accepted her coming death far earlier. He tells of how he, his wife and their daughter went on many vacations that they could not afford in order to steal time away from her painful treatments, and he details the now-familiar stories of financial pressures and occasional insensitivity shown by members of the medical community and others to their plight. This family tragedy highlights the harsh reality of an elusive disease that, as yet, has no certain cure. Illustrations not seen by PW. (June)

Published by Thriftbooks.com User , 22 years ago
This is the story of Tillman and his wife and young daughter after his wife's diagnosis of Stage IV metastatic breast cancer. It is told through the husband's eyes, which is rare in a breast cancer narrative. In so doing, Tillman makes us all part of their journey--and their nightmare. His sardonic wit colors most of the trauma of a late diagnosis, endless and varied treatments, indifferent medical and technicalprofessionals, and his favorite nemesis, the insurance industry. Married late in life and parents of a nine-month-old daughter, the couple are originally told she would not survive long. "I'm going to die," she states. "You'll live to be a hundred," is his constant refrain. The family moves from Connecticut to Boston to be near more sophisticated medical technology, suffer bankruptcy, and go on vacation between rounds of chemo and radiation and bone marrow transplant and hormone therapy. The short-term prognosis becomes nearly seven years, years of pain and dashed hopes but also of dance recitals, school outings, and parent/teacher conferences. This is a marvelous story with a predictable but still wrenching conclusion. Men who love their wives and wives who may have taken their husbands for granted will see themselves on these pages. Beautifully written, this is highly recommended for all public libraries.--Bette-Lee Fox, "Library Journal"
Trustpilot
Copyright © 2022 Thriftbooks.com Terms of Use | Privacy Policy | Do Not Sell or Share My Personal Information | Accessibility Statement
ThriftBooks® and the ThriftBooks® logo are registered trademarks of Thrift Books Global, LLC