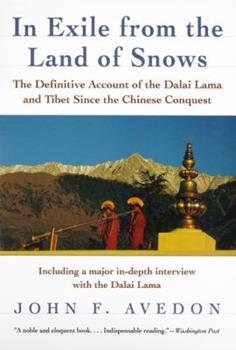 In Exile from the Land of Snows: The Definitive Account of the Dalai Lama and Tibet Since the Chinese Conquest

Now considered a classic, this is an eloquent and compellingly told account of the Dalai Lama's exile from Tibet after its conquest by China.

Not easy to take

Published by Thriftbooks.com User , 19 years ago
If your serious about learning about Tibet and the Chinese take- over read this book.Some of the more explicit chapters made me really angry and kept me questioning "How can humans treat each other this way"?

The Time for Dreaming is Ended

Published by Thriftbooks.com User , 20 years ago
If you have had any Shangri-La type illusions about Tibet, this book will soon blow them away. Not that that is a bad thing, but just be warned. This book will open your eyes, make you laugh, weep, clench your fists and probably curse before you're done, but it will not leave you unchanged, either in your opinion of Tibet, the Dalai Lama, and especially of China.This is a very balanced account from the Tibetan perspective of the period roughly from the end of WWII until 1990. In addition to an unvarnished account of Tibetan bravery, desire to retain their homeland at all costs and credulity, and unlimited Chinese brutality and treachery, there is a great deal of social insight woven in. This is not a "feel-good" story to garner sympathy for the Tibetans, this is a tell-it-like-is book whose message is so daunting that I'm not sure most of the world, much less the Tibetans themselves are ready to face much of it.This is not a book so much about religion, although you cannot write about Tibet without writing about Buddhism, as about world politics thundering down on a small, isolated nation. It is about the bravery and resourcefulness of the Tibetan people and the greatness of their leader. And it is about the utter shameless cupidity and determination of the Chinese to lay hold of this strategic bit of real estate and anihilate its native population. This book should serve as a powerful reminder of what the PRC is capable of and just how much their talk is worth.After reading this, I believe (and HHDL must realize) that the chances for any kind of an autonomous, much less independent, Tibetan region are slim to none, but that the facade needs to be kept up for political and morale reasons. None the less it is a bitter truth that the Chinese have done the rest of the world a favor: by driving the Tibetans out of Tibet, they have released a great force for peace and good to the rest of us in the form of Tibetan Buddhism and the presence of HHDL. I do highly recommend this book.

Published by Thriftbooks.com User , 21 years ago
This is an excellent source for anyone interested in Tibet politically. It provides a picture of Tibet before, during, and after the Chinese invasion. I find it very surprising, (and disturbing)that this book is out of print, given the renewed interest in Tibet and efforts to liberate the country from Chinese occupation. What was done (and is continuing to be done) to the people of Tibet should be part of our daily conversations right now, as we are about to grant China permananet normal trade relations.

Published by Thriftbooks.com User , 22 years ago
This is a very well written and moving account of one of the most tragic stories in modern history, the brutal suppression of the religion and culture of Tibet. While it's true that the Cultural Revolution brought suffering throughout all of China, Tibet bore the brunt of the destruction due to the devotion of the Tibetan people to their Buddhist religion and traditions. Of the more than 5,000 Buddhist monasteries in Tibet prior to the Chinese invasion and occupation in 1950, fewer than 20 remain intact today. Most were destroyed during the Cultural Revolution, and while the Chinese government has recently allowed a few to be reconstructed for the sake of tourist revenues, the heavy-handed suppression of the Buddhist religion continues to this day --- punctuated by periodic "re-education" campaigns in the few remaining monasteries. The Communist party line insists that the Tibetans needed Chinese "help" to emerge into the modern world, but the only real beneficiaries of whatever economic "progress" they've brought to Tibet have been the millions of ethnic Han Chinese who've been induced to migrate to Tibet during the occupation. For anyone interested in the plight of Tibet, "Exile From the Land of the Snows" is essential reading.

Published by Thriftbooks.com User , 23 years ago
This book, is among the very best accounts of the terrible tragedy that has been Tibet for nearly 50 years. Fascinating reading for anyone interested in Tibet. I have read this book twice and look forward to reading it again. Cynics may try to put a pleasant face China's occupation of Tibet, but this book tells it straight. Read it, you won't be sorry.
Copyright © 2020 Thriftbooks.com Terms of Use | Privacy Policy | Do Not Sell My Personal Information | Accessibility Statement
ThriftBooks® and the ThriftBooks® logo are registered trademarks of Thrift Books Global, LLC