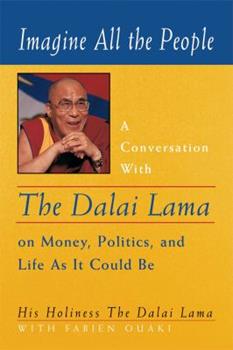 Imagine All the People: A Conversation with the Dalai Lama on Money, Politics, and Life as It Could Be

If you could sit down with the Dalai Lama and talk with him about anything, what would you discuss? Fabien Ouaki, a prominent French businessman, was granted such an opportunity and asked the Dalai Lama for his thoughts on the everyday issues that fill our newspapers and our lives. This is the record of these varied and remarkable conversations. Covered are a wide spectrum of topics - political, social, personal and spiritual - including the media...

Published by Thriftbooks.com User , 18 years ago
You know before reading this book, I thought I had pretty much captured most of what the Dalai Lama had to offer by way of the written word. But this book gave me a different glimpse into the man, where we find a dialogue of intimacy and open honesty unlike we have ever seen in his other works (still wonderful other works, at that!).My favorite section in here was called "The Seduction of the Military." The Dalai Lama comments, "Frankly, as a child, I was attracted to the military. Their uniforms looked so smart and beautiful. But that is exactly how the seduction begins." And how true, yes? Children will be children, even I played with toy guns and bought G.I. Joe's to pass the time with. There are a wide variety of such exciting games, but I now see that perhaps they really are not as harmless as we might perceive them to be. Surely there are fun games for kids to play that aren't based on the killing of other human beings. The Dalai Lama purports that if it wasn't for the fact that so many adults in this world are fascinated and mesmerized themselves by military and war, that we could all see more clearly that allowing our children to play such games is extremely unfortunate. Imagine your child running around the back yard like he is a serial killer! It's somewhat scary when I look at it from this perspective. The Dalai Lama tells of how some former soldiers have through the years told him that at first when they killed someone, it made them feel awkward. But as time on the battlefield progressed, they grew desensitized and more and more accustomed to the act of taking life. That's the condition many of us seem to be in. We see so much of this on either the news or in the form of movies, that we are completely desensitized as to the harm it is actually doing everyone.This is a magnificent book. If you are looking for a presentation on the Dalai Lama the man, this book delivers the good for us here. He covers compassion in a section titled, "The Medicine of Altruism." He refers to the plague Tibet underwent at the hands of Mao, and how this medicine was the requisite every Tibetan needed and sometimes still needs to fully heal from those terrible atrocities. Man I could go on and on. But why don't you let the Dalai tell you for himself? Enjoy the book.

Interesting Q & A from His Holiness the Dalai Lama.

Published by Thriftbooks.com User , 22 years ago
How could I say that anything His Holiness is involved with is bad...? ha ha This book is exactally what it says it is. It's a question and answer session with His Holiness. This is not a straight through Q & A - It's rather a series of meetings with HHDL and this unknown business man. There are quite a few very interesting answers from His Holiness in the book. Basically is this worth buying? Yes, I think it is. Is it enjoyable to read? Once again, Yes I think so. Nothing very complex, just simple, straight forward answers from (in my mind atleast) The most compassionate man on earth. Short and easy to read, check it out.
Trustpilot
Copyright © 2022 Thriftbooks.com Terms of Use | Privacy Policy | Do Not Sell or Share My Personal Information | Accessibility Statement
ThriftBooks® and the ThriftBooks® logo are registered trademarks of Thrift Books Global, LLC